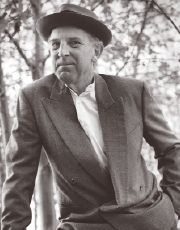 I'm in Los Angeles riding around downtown with poet Lewis MacAdams, who is also chairman and founder of Friends of the Los Angeles River (FoLAR). We pass by numerous buildings, barbed-wired hemmed chain-linked fences, narrow sidewalks outlined by exposed wooden telephone poles and a car that has recently caught on fire. I spot the outline of a palm tree but no river. The famous Los Angeles River is hidden somewhere underneath a heavily engineered concrete trench. As MacAdams writes in his book, The River: Books One, Two & Three (Blue Press, $15):

The river
is a rigorous mistress,
but when you tickle her
with your deeds, you can hear laughter
from beneath her concrete corset.

In the car, I sit quietly and wonder to myself why Los Angeles has so few parks compared to other major cities in the U.S. Why didn't Los Angeles embrace the ideas of Frederick Law Olmsted, who figured so prominently in creating New York City's Central Park? Fortunately, L.A. is becoming a little more self-conscious in providing green space. Through MacAdam's efforts with FoLAR and other civic groups, California recently halted the building of an industrial park by purchasing 72 acres of land—34 acres between Chinatown and the L.A. River and a big chunk of the Taylor railroad yard about a mile upstream. These acres will supply much needed parkland and hopefully allow the Los Angeles River a chance to orchestrate its own resuscitation. Finally, I break my silence and ask Lewis MacAdams a question.

Mary Kite: What do you think about the role of poet as activist? How does poetry bring someone into action within the community?

Lewis MacAdams: I've never really understood the relationship between poetry and activism. You can read all the poems against the war in Iraq. What I do is not against stuff. It's for stuff. There's a vision of a restored L.A. River and what it would mean to the city. That vision is what I've been acting out over the last twenty years. It's an evolving principle that has become a central part of my life—just as poetry is. The role of poetry is to articulate the vision.

As a poet, poetry allows me a certain kind of freedom, but it's not as if I write poetry and people rally around them to create parks. I support the bond issues. As a matter of fact, for many years I never wrote poems about the river at all—I wrote op-ed page articles, letters to the editor, screenplays and newsletters. All of these writings were inspired by the L.A. River but I wasn't writing poems about it. Then about six years ago, I was re-reading Paterson by Williams Carlos Williams, and it gave me permission to work on The River.

Poetry drives everything that I do and allows me to think in a free way.
My poetry doesn't intend to be political.
It's personal.
I don't use poetry.
I let poetry use me.
It's just a better arrangement.

MK: How does poetry provide you with the ability to recognize the extraordinary within ordinary situations?

LM: Poets can see what's not there. The role of language in public life is something I take very seriously. For better or worse, I'm a symbol of this particular thing. As a token of identity, there's a responsibility to being optimistic, positive, forward thinking, cheerful and forceful. Sometimes I call myself "Riverboy"—a character who is always merry and bright. I don't always feel like that necessarily. It's only one aspect of a personal quality. People want to be inspired. They don't expect it's going to happen very often. When they are, they love it!

MK: When you write, do you ever feel as if someone is watching you—your poetic forebears?

LM: I don't think so, but I'm definitely affected by other poets' writings. I wouldn't be the writer/poet that I am if I hadn't read millions of poems or gone to thousands of poetry readings. I'll find myself saying a line of Ted Berrigan's. I know I'm not the only one—Ted is addictive. No poet has affected me more than Frank O'Hara, but O'Hara had little to do with political issues. Obviously, there isn't any one way for someone to be a poet. And L.A. has affected my poetry in the sense that it has affected my life. There's nothing that I can identify as being a particular L.A. sound or aesthetic.

LM: There are millions of scenes here. Beyond Baroque is one of the best known outside of L.A. I hang out a lot of the time with this young guy called Mike the Poet and his partner, Phil Harmonic. There are worlds within worlds of poetry here; Beyond Baroque is central but there's more happening. I wrote screenplays, directed, wrote and produced documentaries. I was knockin' on that door for seven or eight years. I wasn't interested in it ultimately because I didn't dig being told what to write. Wealthy screenwriters are, to me, mental slaves. I couldn't aspire to that. I'm a poet. My heroes are poets.

MK: Screenwriting is "made to order" writing?

LM: For me it sure is. There are people who enjoy that sort of thing. You can make a living doing that and I was able to sell my work, but it ultimately felt belittling.

MK: You mentioned that you had made documentaries. Were they about poets?

LM: John Dorr and I produced and directed twenty-six of the Lannan Literary Series' one hour shows about great poets from around the world. I also found that journalism was a way to provide for myself while I wrote movie scripts. I'm still doing a lot of journalism, yet also trying to be true to being a poet. In the earlier days with the Friends of the Los Angeles River, I had to spend a great deal of time going to meetings. Now I focus more on what I love. In challenging myself for twenty years I've developed ways to avoid burn out.

MK: Sustainability within change is not an easy trick to perform nowadays.

LM: Yeah, I gave the commencement address at Cal-Poly Pomona last weekend and that's exactly what I was talking about. Work for me is very much like taking Bodhisattva vows. In terms of being a poet, it's just following the news. One of the things Ted Berrigan excelled at was the concept of using poetic form. He analyzed and thoroughly researched poetic form.

MK: Poetic forms are important to you?

LM: Yes, form is important! Frank O'Hara said, "You want your pants to fit so that people want to go to bed with you." For poets to understand poetic form in a stylish fashion is nothing more than common sense. I've never trained myself in the ways that somebody like Anne Waldman has, however, we're both theatrical. The written page is my stage. That's my aesthetic position. Jumping back to the question about poetry and activism, it's more about the vision that poetry supplies. The rest is just work. Poetry offers me a way of being positive and encouraging. I'm not a scold and have calmed down since my twenties.

I'm pretty blessed as far as Friends of the Los Angeles River goes. I've had some trouble, but not much. Most people initially dismissed it as absurd. Then, when it actually happened, people began to see how cool it was. It's amazing how many people have said nice things to me. However, I did have some rough times in making it come together. I experienced a great deal of anger.

MK: Anger can be a great motivator.

LM: I agree. Ed Sanders said that anger puts you in touch with the earth.

MK: That reminds me: what were you thinking about when you ate dirt?

MK: Were you really eating dirt?

LM: Yeah! I was out there in those days. I was just about to move from L.A. to Bolinas and had mutated into a desperate character. Have you seen the cover of the book, Africa and the Marriage of Walt Whitman and Marilyn Monroe? Well, there's a photo of me in there of doing a performance. I'm no longer like that, most fortunately.

MK: Were there many people there to witness this?

LM: You mean the dirt thing? Yes. There were quite a few. It was a pretty big event. In downtown, next to the grocery store, there was a vacant lot. Next to that, there was an Italian seafood restaurant that the owner burned down with himself and his wife in it. The structure stayed vacant for a long time. Everybody called it burnt park. We decided to do a ceremony called birth park. In order to get from burnt park to birth park, I had to eat the poison.

MK: What people often overlook with poetry performance and readings is that the audience has a definite effect over how and what is being said.

LM: One time I forgot to turn off my cell phone during a performance, and my ex called while I was behind the microphone. So, I just included it. She wanted to know what we needed to bring over to our friend's house. I just carried on a regular conversation with her while onstage. People were stunned. It was as if I had done it on purpose. The situation opened people up! I want my poetry to be exciting and surprising. I want people to gain true insights into whatever is being offered to them. I want to get people off. I don't think you can teach people to be good poets. You have to learn on your own. It's an incredibly rigorous lifetime act with complete self sacrifice. It often leads to madness, poverty and suicide.

MK: Do you often feel mad and suicidal?

MK: I always thought that taking a bullet for someone was such a gracious notion when I was young and in love. Poetry sometimes feels that way. Ouch, I'm hit!

LM: Many of the articulate inklings I have about poetry are based on Frank O'Hara's essays. I barely have ideas about poetry, let alone lofty ones. Gregory Corso once said to me, "Lewis, I know everything there is to know. I said, "How's that Gregory?" He said, "Because there's not that much to know!"

MK: Great to confirm there's so little to understand in life.

LM: I've never been around people who were as emotionally engaged as poets. Having seen what poets have to do to survive . . . it's so hard.

I spot you coming at me as bright as a million gold tulips
wrapped in your tattooed arms.
Hopelessness is good.
Homelessness is better.
Helplessness is best of all, but
I'm not some Ken-L-Ration
pissing in the doorway,
with my brains in a
Styrofoam cup.
I'm a poet, and when we suffer,
we sing.