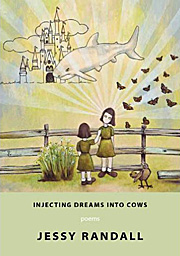 Jessy Randall’s new collection begins with “Metaphors,” a clever piece that bucks preconceptions: “A duck is like the moon / because a kid can point at both. A house / is like the sky: both hold things.” The comparisons layer one upon the other until the poem ends with a playful conclusion: “This poem is like a pillow: I hit you with it.”

Randall’s poems tend towards the brief, often minimalist. Throughout, her sense of humor reigns. “One Day, the Ass-Talker Stopped Talking Out of His Ass,” describes the fateful day we all wish would come for some people, “I was wrong, he said. I was only guessing. I never really knew the answer,” she concludes. If only. “Trouble in Pac-Land” is about exactly what you’d think:

The truth is I don’t know
what it was that set me,
well, packing. Maybe it was
the lack of scrutiny.

All those teenagers
for so long, caressing
that perfect round
controller. And then
they were gone,
move on, grown up.

A disenfranchised Ms. Pac-Man sets herself up in a new life out of boredom. “I’ve got my own game / that no one plays,” she says. It’s a study in existential despair; the waning housewife recreated as pop culture icon who isn’t really any happier.

Randall eventually shifts from humorous and sardonic tones to more sincere ones, though she manages to maintain her sense of humor. “My Son, When He Is Sick,” presents a sweet portrait of concern:

My son, when he is sick, is a little wet
hot ball candy, sweaty forehead,
damp hair on the back of his neck,
his eyes screwed shut as if that will help.

His toddling voice repeats “oh dear, oh dear”
when we ask what hurts. He says a quiet
“yes” to everything: Is it your tummy?
Your throat? Your foot? Your toy hippo?

He slurps his water and then throws up
everywhere, his father and I leaping to catch it,
begging “throw up on ME, here is my sweater,
my lap, my cupped hands.”

“Why I Had Children” is another poem to which many parents will relate:

Randall’s poems waste no words: they are often short but pack a powerful punch. Her language is clean and precise, which allows her to sneak-attack the reader with profound images. Randall’s poems have been appearing in various literary journals for some time, and this collection solidifies her reputation as a talent to watch.