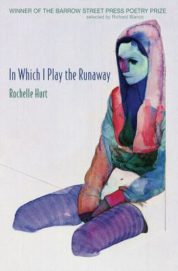 As Rochelle Hurt read in a small off-site café during February’s AWP conference, she seemed haloed in an angelic yellow light as the snow spiraled blue behind her through the window. It seemed fitting that she was awash in such memorable lighting, as her poetry is similarly color-infused. In a crowded loft of a packed bar, I was mesmerized as Hurt beckoned me into an all too familiar tornado. She spoke softly, and the whole room stirred as she proclaimed, “My poems are named after towns with sad names.”

Hurt’s writing addresses questions of semiotics and Ferdinand de Saussure haunts her poetry, but she doesn’t ever have to refer to him directly. Rather, Hurt explores the infinity encapsulated in labels by composing studies of colors until they resemble still lives of places blowing in the wind. In fact, the entire narrative design of In Which I Play the Runaway mimics the spiraling intensity of Dorothy’s journey through Oz, an appropriate choice considering the film’s landmark exploration into color on the infamous silver screen. Like Dorothy, the narrator abandons black and white, chasing after new worlds that are lit by colors like stage lights—but the poetry is haunted by the black and white it left behind. It stirs back into the narrative like static; it’s as though the protagonist realizes that her yellow brick road is only a lucid dream.

As promised, Hurt pauses momentarily along her wayward path in towns with lonely, existential names like “Hurt, Virginia,” “Needmore, Indiana,” “Accident, Maryland,” and “Honesty, Ohio.” The book hovers in each lonely city as the poetry takes on the vocabulary of the place, then hitchhikes onward to the next lonely town. The colors compose a rolodex of characters. Yet, hints of an adult deviation from the prototypical Dorothy infiltrate Hurt’s knapsack.

In the opening poems, Hurt laments her own predisposition to flee, and ruminates over divorce and homelessness as recurring motifs. As she wanders, her body begins to ache, but she insists she is destined for paradise, “one brick, one brick. // By now your feet are swollen / to the size of pomegranates / pulsing fuchsia inside.” This is the first of many poems warmed by whole colors, but rather than slippers made of rubies, instead the metaphor evokes blood, boils, and bruises.

From there, the tornado consumes the language, spilling colors that bleed from one page to the next. Whole paragraphs glow green and blue. “My father was obsessed with green—grass, yes, but also emeralds, limes, snakes, peas, parakeets.” The green overtakes the house, and the exorcised family lies packed in a row, “straight as green beans. The parakeets circled all night. Once the house had split its seams, spilling rotten apples and dead geckos on the sidewalk, my mother packed us up and left him. She said the quest for something greener had eaten his mind.” Since green evokes both wealth and nature, Darwinian theory is on the tip of Hurt’s tongue.

Consequently, the dejected family floats up into the blue, blue sky. Pages turn sky blue in a post-divorce attempt at rehabilitation. “My mother painted every wall and ceiling and floor a different shade of blue, and the empty rooms were so enormous that their edges looked to me like horizon lines.” As the reader swims through washes of color, he or she is beckoned to unpack the cult of metaphor. When we need them, metaphors can be a saving banister. Sometimes it is easier to invest in metaphor than in the world.

This collection is essentially a cross-country travel guide for the curelessly nomadic. Hurt seeks resolution and solace as she reflects on the reciprocal nature of family histories; she blurs into the superego of her daughter, and there is a subtle shift as things move from a child protagonist misinterpreting the words of her parents to an adult protagonist being misunderstood by her daughter. Her daughter develops a familiar affinity for theft, mirroring the impulses of her mother; rubies, purse straps, dolls, and even baby teeth go missing, gleaming in seclusion like precious pearls. “There we stood, stuck in a shame loop: lady see, lady do—the two of us blushing in tandem like siren lights.” The blood rushes to their faces as they interlock guilty secrets, and in the final moments, the reader is immersed in a flash of red.

Red evokes violence and death, yet far more haunting are the furrows of life refusing to succumb to stasis. Body parts live on long after death. Dead parakeets wriggle in shoeboxes lost to the garage, filled with nervous worms, and eye balls wink in the casket. There is a sense of disembodiment, as characters struggle to align their limbs with their sentiments. Perhaps, Hurt seems to suggest, motherhood is a masquerade. Yet somehow, writing offers a semblance of control, reflecting the Wizard himself: “A lesson / in Western confession: Story / is the curtain I work behind.” Ultimately, Hurt ascribes to the affliction of lonely authors. Sometimes, in our solitary moments, poetry can quench our thirst for intimacy, making use of magic tricks and props to evoke sorcery. Enveloped in the craft, the poet unravels memory, “punching out windows” of childhood homes. She stands naked on the page, baring all for a series of gleaming and nuanced words awaiting misinterpretation. “Anything to save the Poem, She says.” Like many heartbroken authors, Hurt mourns that sometimes poems can feel more intimate than people.

Finally, the collection culminates in apology. The narrator laments her struggle to translate her daughter’s estranged language: “There are sixty-seven terms for red, forty-two for leaving, but none for sorry.” Her daughter’s words disintegrate into the guttural inclinations of language divorced from meaning, the “tk tk of fingernails on drywall, / sh sh of lace on tile,” until, finally, the metaphors unfurl: “Some crumble in my hands— / that’s how sorry I am.” And so, we awaken in the calm after the storm, like Dorothy— back in black and white, back in Kansas, and wondering how we got here.