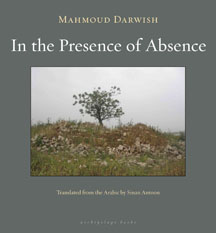 Sinan Antoon, writing in The Nation upon the occasion of Mahmoud Darwish’s death in 2008, called him “one of the last great world poets.” Darwish published more than fifty books, his work finding in translation readers around the world; his public appearances attracted audiences in the thousands, and his poetry was sufficiently visible to be angrily debated by the Israeli government. When not living in exile, Darwish endured house arrest and imprisonment five times for his political activism and public readings (with the latter, even when he might have wished otherwise, invariably seen as an instance of the former). Through it all, Darwish accepted his role as the voice of Palestinian resistance while never allowing his poetry to succumb to the merely political or to the expectations of his audience. In the Presence of Absence was composed with the poet’s sense that it might well be his final work; as he writes here, “No poetry can defeat death when they meet, but it postpones it.” A spiritual autobiography that looks like prose but feels like poetry, that moves from death to birth, from his own grave to his father’s, from anecdote to meditation, In the Presence of Absence is, in the words of the newspaper Egypt Independent, “a farewell . . . that doesn’t end.”

In his Preface to the book, Antoon calls Darwish’s last effort a “self-elegy” (a genre with a long tradition in classical Arabic poetry), though Darwish himself remarked to Mohammad Shaheen, the book’s first translator into English (Absent Presence, Hesperus Press 2010) that even he did “not know to which literary genre this book belongs. I admit it is a baffling text.” Such a text, caught between genres like its author between home and exile, absence and presence, frustrated dream and confounding reality, seems entirely appropriate to describe this baffled life. “I came, and did not arrive. I came, and did not return,” Darwish writes of finding himself back in Gaza after years abroad. It was a life riddled with longing, caught between the lost paradise of a mythologized past and a future haunted by last things. It was a life seen as a “journey without roads, maps, or addresses” that never took the poet from the existential situation in which he—perhaps only more obviously than most of us—forever found himself: “But as you look over your life now, like a mariner considering his own disappointment with the unfathomable secrets of the sea, you ask: Where is my port?” It was a life that found itself attracted to poetry and imagination because poetry “is an act of freedom” and imagination a refusal to submit to reality. It was a life for which paradox, antithesis, and antimetabole were the preferred rhetorical schemes: “For not all what was will be, and not all that will be was”; “I resemble you, yet I do not become you. I become you, yet I do not resemble you.”

In the Presence of Absence takes the poet from his childhood in western Galilee to his family’s flight to Lebanon during the Nakba of 1948, from their surreptitious return a year later to what had become Israel, resulting in their classification as “present absentees,” to Darwish’s subsequent years of exile and return. As autobiography continues—heart surgery and increasingly precarious health, imprisonment, a typical day’s routines, reunion with his mother—Darwish reflects upon love and lust, writing as escape and homecoming, memory and imagination, Israel’s enthrallment to its own myths and the beauty of the places he has called home, loneliness and longing, the scent of mango and ginger in Cairo and autumn in Paris. Throughout, Darwish seeks to close the rift between words and “what they represent” in “a struggle for what lies beyond the power of weapons: the power of words.”

“Mad Ireland hurt you into poetry,” W.H. Auden wrote of William Butler Yeats. Darwish, too, was certainly hurt into poetry, atoning “for sins I had not committed” by striving to be a Trojan among poets, that is, one who tells the stories the victors don’t want told. Thus, Darwish speaks of the lives of the expatriated:

There is nothing we can do and there is no tomorrow, they said, when we are in this state, bound to firm fates, tied to abyss after abyss. We take water from the neighbors’ wells and borrow bread from the rock’s bounty. We live, if we are able to live, in an infant past, planted in fields that were ours for hundreds of years until a moment ago, before the dough rose and the coffeepots cooled. In one ill-fated hour, history entered like a bold thief through a door as the present flew out through a window. With a massacre or two, the country’s name, our country, became another. Reality became an idea and history became memory. The myth invades and the invasion attributes everything to the will of the Lord who promised and did not renege on his promise. They wrote their narrative: We have returned. They wrote our narrative: They have returned to the desert. They put us on trial: Why were you born here? We said: Why was Adam born in paradise?

In the occupied territories or in Tunis or Vienna, Darwish lived what the Israeli-Palestinian writer Emile Habibi described as an imprisoned life, whether one found oneself behind bars or on the street. Here, the personal is inescapably political, the two as difficult to disentangle as memory and imagination, poetry and prose, presence and absence. Thus, arriving in Ramallah across the Allenby Bridge, Darwish confronts a security checkpoint: “on this bridge no one is who he was just a moment before . . . There the soldier, be it male or female, will peel him unceremoniously. Because they possess the right to do with him as they wish: Take off your shoes! Take off your watch! Undo your belt!”

As Jean-Paul Sartre famously argued, occupation provokes resistance, and in resistance one may find both freedom and dignity. So it was with Darwish, that exile from paradise, who wrested from such an existence more than poetry; he also found wisdom and gratitude (I will not add “lasting fame” to the list, for “immortality is a winning lottery ticket whose owner died minutes before the result was announced”). In making present what is absent, Darwish became more than one of those victims he describes who “did not finish any of their tasks.” Life on the margin, he insists, lets one know where one stands: “The margin is a window looking out on the world. You are neither in it, nor outside it. The margin is a cell without walls. The margin is a personal camera that selects the images it wants from the scene, so that the king is not a king and David’s slingshot is nothing but Goliath’s weapon.” And as Darwish makes clear on every page of this book, amid a baffled lifetime’s marginalia can also be found the wherewithal to bless much of what has been—like sleep, “which gathers you from the ends of the earth and holds you tight as if you were your own mother,” or any tree whose green is an “expression of gratitude the earth sends in a soliloquy to its neighbor, the sky.” Many people safe in their homes have found less to be thankful for, and less to praise.