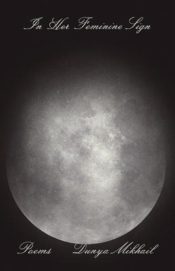 An Iraqi woman poet whose first two languages are Aramaic and Arabic, Dunya Mikhail graduated with a BA from the University of Baghdad, and then worked as the literary section editor and translator for the Baghdad Observer. After suffering harassment from Saddam Hussein’s government for her writing, she left Iraq in 1996, eventually moving to the U.S. where she studied Near Eastern Studies, receiving an M.A. from Wayne State University. She has published five books of her poetry in Arabic. In the U.S., New Directions has published translations of three of them—The War Works Hard (2005), Diary of a Wave Outside (2009), and The Iraqi Nights (2014)—as well as her first non-fiction book, The Beekeeper: Rescuing the Stolen Women of Iraq.

Though Mikhail has never returned to Iraq, her poetry focuses on her homeland. In an interview on NPR in 2013, she said she recalls Iraq constantly in fragments. She describes the first Gulf War vividly: “I remember the windows of our classrooms shaking from explosions. You know, the war was like the norm.” She adds that “poetry is not medicine—it's an X-ray. It helps you see the wound and understand it. We all feel alienated because of this continuous violence in the world. We feel alone, but we feel also together. So we resort to poetry as a possibility for survival. However, to say I survived is not so final as to say, for example, I'm alive. We wake up to find that the war survived with us.”

Mikhail’s fourth book of poetry to appear in English, In Her Feminine Sign, differs from her previous collections in that she wrote this book in both Arabic and English, “from right to left and from left to right.” She didn’t translate her poems, nor did she have a translator; she actually wrote the poems twice. She claims writing this new way “is to mirror my exile,” and also hopes that the “dialogue between the two texts is democratic, and even hopeful that East and West may meet in that crossing line between two languages.”

In the first section, called “The Tied Circle,” the first poem (“The Stranger in Her Feminine Sign”) introduces the English-language reader to the gendered language of Arabic: “Feminine words are followed / by a circle with two dots over it,” which in the poem is transformed into the woman who is bringing to the town “wishes / which come true only when forgotten.” The whole book can be seen as Mikhail bringing us the feminine words of her vision of exile. In “Nisaba,” named for the goddess of writing, the poet praises the little things (“I mean the big things”) and describes a girl who uses chalk and “who draws for the world / a circle with everyone inside,” including “the comma between / death and life.” And her vision in “Baghdad in Detroit” jumps backs and forth between July 4th in her university town and the explosions that rocked the capital city of Iraq.

“Tablets,” the second section, is named after Sumerian repositories of the world’s first writing. In this section, Mikhail says she is writing Iraqi haiku; these short poems aren’t strict haiku in terms of syllables, but they do have the intensity and sensory imagery of haiku. These tablets/haiku record exile, loss, and gorgeous memories such as in “tablet III/5”: “All of us are autumn leaves /ready to fall at any time.” Another poem, “tablet III/10” describes love: “Of course you can’t see the word love. / I wrote it on water.”

The third section, “T/here,” has longer poems of exile, most saturated with that quiet, longing Mikhail so often puts in her lines. One of the most haunting is “N,” the name of the letter that Daesh, the Arabic term for ISIS, left on the doors of minorities to warn them to flee their homes or be murdered:

How heavy the carriage is!
It carries the skies
on their shoulders,
along with their sorrows,
the phantoms of those
taken aside
and the last looks.

These poems are beautifully heartbreaking and intense memories of the violence of war and of the poet’s longing in exile. Mikhail has written brilliantly, bringing the lives of Iraqis to U.S. bookshelves.