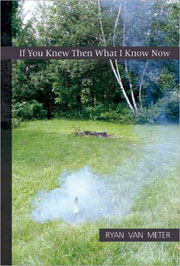 Growing up in the vast and quiet space of the Midwest, Ryan Van Meter kept his homosexuality a secret from his friends and family, and for a while from himself. It is not hard to imagine why he would keep such a secret. It was only in the beginning of the 20th century that homosexuality came into the vernacular of psychoanalysis, and at the time it was used primarily to describe what was believed to be a mental illness. Van Meter’s debut collection of essays, If You Knew Then What I Know Now, explores the silence and quietness that remain around homosexuality and the difficulty in defining yourself when all you know is you’re “different.”

Van Meter relates his experiences in fourteen interconnected and chronologically arranged essays, looking at how his sexuality informed his upbringing, his embarrassments, and his insecurities. He begins with “First,” which was anthologized in The Best American Essays 2009. The essay considers the author’s first sexual attraction, or what he thought was a sexual attraction at the age of five. Van Meter weaves through the present tense, while not letting go of his anguished reflective voice as he describes sitting in the backseat holding another boy’s hand, wanting to marry him. The haunting conclusion of the essay foreshadows the vacant solitude to come as his mother blatantly—and to the young narrator’s mind, harshly—says that boys cannot marry boys. The rest of the ride is as his experience growing up: silent.

Years later, at the age of thirteen, Van Meter acknowledges for the first time that he is different. This realization comes in the form of fear, not of a person, but of aliens. In the essay “Specimen,” Van Meter watches a television program about people abducted by aliens, and is convinced that he will be too. “It seemed inevitable, guaranteed. They were going to take me onto their spaceship and pull me apart.” This is also probably the first time Van Meter knows why he is keeping a secret. He is so afraid of being abducted that the only person he tells is his mother, and he begs her to sleep next to him each night. In “Specimen,” Van Meter understands the loneliness of being different; it is the beginning or the unraveling of the deeper secret that has not came into view.

As years pass by, the secret became more apparent to Van Meter. He meets another gay schoolmate named Justin, and realizes that dating women does not satisfy him the way he thinks it should; later he finds confidence in a friend named Kim. Eventually, attending Christian camps and glancing at men, his classmates, his father’s friends, all point Van Meter toward the conclusion that he is gay.

In the second half of the collection, Van Meter comes to terms with his homosexuality. In an essay on the word “faggot,” the mature Van Meter opens with a scene where a student uses the smear to describe one of his colleagues; from there he moves to conservative pundit Ann Coulter calling former Senator John Edwards “a faggot.” The essay looks at the word’s origins, and Van Meter’s encounters with it. Despite the essay feeling out of place in the collection, it is understandable why it is included: every gay man has had that slur directed his way, and when one is unburdened from suppressing who he is one begins to inquire where the burden to suppress comes from—and “faggot” is at the heart of it.

What is striking about If You Knew Then What I Know Now is how much the Midwestern landscape rolls onto the page, and into Van Meter’s life. The Missouri plains, the lakes of Minnesota, the humid summers, and the winter cold are all felt, though they are not explicitly identified. Perhaps that is one reason why Van Meter’s experience feels so unique, so pertinent in its telling. There is a juxtaposition of solitude here: in the silent and boundless landscape of the Midwest, one is often forced into silence, just like one forces themselves into silence when keeping a secret. Luckily for Van Meter, the secret is out, and the release serves him and the reader well.