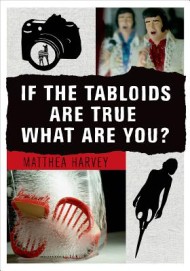 If the Tabloids Are True What Are You?, Mattea Harvey’s fifth collection of poetry, combines photographs, silhouettes, sewn images, and poetry with startling originality and depth. Harvey conjures a portmanteau of dazzling wordplay where mermaids, puppet snobs, and glass girls frolic in dreamscapes at once strangely odd and utterly familiar.

Harvey’s poems erect temporary worlds circumscribed by their own playful insouciance. We stumble into them, slightly flummoxed, as one might upon seeing a tinker toy on the bridge of a warship. In the poem “One Way,” we follow the narrator into a devilishly funny poke at the provocation of pointing a finger:

Where the first one came from,
We’ll never know, but once it landed,
it did what arrows do—it pointed.
The headlines read NEW SHAPE DISCOVERED:
ARROW INVENTS THE STRAIGHT AND NARROW.

She then winnows through delightful valences of her arrow metaphor, gently nudging us toward a cloying awareness of the deleterious effects of having things pointed out to us:

Arrows led to purchases.
Arrows led to adieus. A simple shape
had turned us all from cars into ambulances,
keening with intent.

Harvey explores various depths of disappointment and unfulfillment in a group of poems about the lives of women, thinly disguised as mermaids. Using this mythical, feminine figure of longing tinged with tragedy, she carves out images teeming with symbolic import. Each poem is paired with a silhouette of the sea-faring creature, tail fitted with a utensil such a wrench, rake, or Swiss army knife.

In “The Objectified Mermaid,” Harvey imagines her subject as a downward spiraling sex object, photographed and packaged for consumption. Much like the patrons who pay to fondle her tail, we too become voyeurs of her cynical exploitation via Harvey’s provisioning of details such as a standard seaweed bra and glycerine-sprayed scales.

The mermaid trope carries over into the long poem “Telettrofono,” with a mingling of journalese, legalese, and pedestrianism. Structured in eighty sections or “modes,” the poem follows the tragic life of Italian Antonio Meucci, a 19th-century New York immigrant now largely forgotten as the inventor of an early telephone-like device. Harvey’s attention sits squarely on Meucci’s wife, Esterre, whom she envisions as a mermaid who flings herself ashore in search of sound. Harvey’s deft use of alliteration dresses Esterre’s transformation to human with magical fanfare:

I smashed my head through the barrier between sea
and sky and there was the two-ton wave-timpani,
the puffin’s claws click-click-clicking as it skidded
to a stop on the cliff’s edge, rain spanking the sea
until it wailed. I clapped my hands and the claps
echoed back like an answer. Yes. Yes. Yes. Yes.
Between the third and fourth yes, my tail split
In two, sprouted knees and feet, toes.

In collaboration with sound artist Justin Bennett, Harvey wrote the poem as part of a soundwalk for the STILLSPOTTING NYC: STATEN ISLAND project in New York. The book provides an online link to a full audio recording.

This collection casts a range of poetic forms: prose poetry, erasure, lyric, sonnet, and visual assemblage (poesia visiva). “Stay,” a series of photographed “sculptures” comprised of colorful miniature figurines encapsulated in ice cubes, is one of the more formally arresting “poems” in the collection. Using the title (itself a photograph) and linear arrangement of the ice cubes, one might read this text-less poem as a comment on domestic turmoil and ultimate separation. The spatial arrangement of human figures and chairs suggests isolation, fracture, and loss. Who knows? This poem and others leave ample room for speculation.

And that’s what’s so special about If the Tabloids Are True What Are You?—Harvey invites us inside her voluminous imagination without polemic, although at times her poems are starkly self-conscious. Whether they allow us to pity a hapless Michelin Man tire that sees through the eyes of William Shakespeare or ponder a stereotype tying its shoestrings, we come away savoring her wily irreverence. Many poems here demand multiple readings. A first reading might thwack us over the head; a second might elicit some sigh of relief; a third will confirm how much these poems reward us with the awe—and the protection—of dreams.