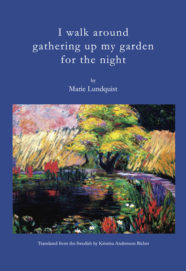 The speaker in I walk around gathering up my garden for the night, Swedish poet Marie Lundquist’s debut poetry collection from 1992 now translated into English by Kristina Andersson Bicher, is concerned with constraint and liberation, the effort “to survive in a bounded space.” It is a book of small but mighty blasts of verse: The poems often have no more than ten lines, and they present startling and dense combinations of image and reflection.

Lundquist’s careful tweaking of tense and perspective provide the book its critical charge. Take the following poem, composed of just two lines, which opens the book: “Two women watch over your grave. / Me and the person I could have been.” Here Lundquist combines reality and an alternative to create, at once, a schism and a spectrum of experience. Each succeeding poem similarly slices open expectation to reveal additional layers and depths, which the poet then leans over, peers into, and conveys to the reader.

Throughout the book, Lundquist opens her poems by merging the abstract with the cinematographic, and the result is both terrifying and exhilarating, as in “The night porter reaches out his hand”: “His nails are shiny like windows. / I fall from the seventh floor.” Playful to the point of risk and danger, Lundquist constructs brief moments that are difficult to interpret. The form of relatively linear poetry serves as a marvelous and disruptive arena for this iterative, jagged movement, and reflects a mature and dominant mind behind the individual lines, akin to Sylvia Plath or Adrienne Rich.

With a sometimes cynical sense of humor, Lundquist uses the objective world to support, like scaffolding, her cinematics. Each ordinary object feels exquisite and otherly, even Lynchian at moments:

We sit at the kitchen table and eat our
meatballs. You don’t understand why I
am drawn to your body. I just want to stick
my hands in.

Humor meets horror meets feminist incising, strikingly similar in tone to the visceral works of South Korea’s Kim Hyesoon. Occasionally Lundquist’s images stretch themselves into the realm of the absurd, offering moments of respite in their ability to stun: “One time her handbag opens like a / revelation. Its contents consist of burning / meat.” The images strike and pummel their way into otherwise drab and forlorn circumstances, experiences of cruelty and vague disdain.

The Kafkaesque reality that plagues the speaker is one that reflects a variety of nightmarish paradigms, just as the book’s title suggests a certain fatigue but continuation through it all. In “A grown man gently lays a woman down,” Lundquist briefly sketches the disturbing similarities between objectification of women and a child’s play with insects. In “She was more afraid than her child was,” the speaker’s clearest understanding of domestic conflict is through the most violent image in the poem: the thunder.

As translator Kristina Andersson Bicher remarks in her useful introduction, “There’s authenticity in league with surrealism. Earnestness holding hands with irony. While the emotional terrain explored is intense, devasting even, Lundquist’s tone remains arms-length. The voice is calm but never seeks to comfort.” That calmness and comfort is especially entrancing as Lundquist brings together an array of experiences that define entire lives.

Perhaps the work of I walk around gathering up my garden for the night is best summed up as both world building and deconstruction at once. It often involves a movement through the anthropomorphic and absorptive, the speakers and characters merging with each environment. Whirling and blending, as destructive as it sounds, reflects harmony and universality. Ultimately this process allows for the speaker to “Become grief,” as one poem directs; Lundquist indicates over and over, from blurry scene to blurry scene, that this process if one of both pain and healing, affording clarity, catharsis, and reconciliation to a world built upon harm and conflict.