If one outlines the shape of an apple with a continuous line one makes an object of the shape, whereas the contour is rather the ideal limit toward which the sides of the apple recede in depth. Not to indicate any shape would be to deprive the objects of their identity.
—Merleau-Ponty, “Cezanne’s Doubt”1 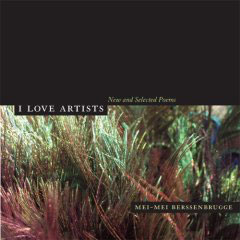 Cezanne refused to dissolve the object into atmospheric effects (Impressionism) or to assimilate the phenomenal world to ideal forms (Renaissance naturalism) because neither technique could depict the emergence of form in the process of perception. Instead of giving his apples a single black outline, therefore, Cezanne’s paintings present ‘several outlines in blue. Rebounding among these, one’s glance captures a shape that emerges from them all.’2 By making outline a felt effect of coloration, Cezanne depicts the apple taking form.

For four decades, Mei-mei Berssenbrugge has been writing poems that seek to make the process of perception perceptible. “She is neither objectivist nor subjectivist but a poet of the whole consciousness.”3 The horizon, the dusk and dawn, freezes, thaws, fog—these are the tropes of a poetry concerned with how form arises out of (and threatens to return to) indeterminate states, how the complex interplay of subject and object engenders meaning. But what is the linguistic equivalent of forgoing fixed painted outlines for shapes produced by modulating color? How does Berssenbrugge’s poetry dramatize perception itself?

Consider these lines from the early sequence “The Field for Blue Corn”:

a horntoad ran under a bush. I insisted it was

ran out. Now, on a hill I never noticed

between two close ones we’ve climbed, I see

at an altered angle. Some small shift in refraction

has set the whole plain trembling and hostile

Note the juxtaposition of an abstract vocabulary (matrices, refraction) with direct, descriptive speech. ‘Sage’ aside, the first line sounds like an art critic describing an encounter with a Rothko as much as it sounds like a hiker describing the movement of a bush. Because the poem begins with the rhetoric of abstraction, the particulars that follow seem both descriptions of specific objects and descriptions of abstract forms. This combination of abstract and concrete rhetorical registers invites the reader to think beyond local percepts (baby birds and horntoads) to the process of perception. The slippage here is scary (elsewhere it will be a source of pleasure). The speaker misperceives a small thing—horntoad—and fails to perceive a large thing—a hill—and a landscape that deceives her at both the micro and macro level is experienced as hostile. She had insisted; she had been sure. The appearance of an actual baby bird only increases the disorientation; has her misperception materialized? Finally, ‘plain’ suggests ‘plane’—as if the world were dissolving into abstraction as a result of her inability to ground it with reliable observations. Subtle, sudden movements between the concrete and the abstract, between simple descriptive and formal vocabularies, define much of Berssenbrugge’s work. Think of how Cezanne’s landscapes are at once views of a particular countryside and arrangements of interchangeable cylinders, spheres, and cones.

Anyone familiar with Berssenbrugge’s writing can date the poem quoted above, because, beginning with Empathy (1989), her line changes dramatically, lengthening into one of the strangest, most powerful units of composition in contemporary American poetry. The radical extension of Berssenbrugge’s line heightens the reader’s awareness of time and space by making the reader aware that time and space are running out: the far right margin is a precipice. Perhaps this is why Barbara Guest has described Berssenbrugge’s line as “perilous.” Additionally, because Berssenbrugge often works with a kind of propositional syntax (‘be’ is probably the most common verb in the book), her long lines provide the action—a sense of movement, growth, fluctuation—that ‘state of being verbs’ lack:

You would know everything you see in the first place, but the terms of your recognition grow

increasingly intimate and ecological, like the light of the gold of jewelry on you, which

while it is still light, is still becoming abstract.

Here and elsewhere, Berssenbrugge plays with the supposed stillness of ‘is.’ The copula’s assertion of timeless identity is in productive tension with the temporal and spatial distension of the lines. Instead of just presenting conclusions, they measure the unfolding, the manifolding, of thought in time.

Indents indicate that the break is a function of the dimensions of the published page, not an authorial decision. Interestingly, Nest and the new poems in I Love Artists have no indented carryovers. Is the following one line of verse or two?

I’m interested in why Berssenbrugge stops indenting what at first appear to be widows. Indented overruns ask the reader to correct for the margin in her mind—to mentally reconnect the indented language with the preceding line and pretend the unintended break never occurred. I wonder if Berssenbrugge has abandoned this technique because, as a poet deeply attuned to the experience of reading, she cannot countenance replacing the temporal and visual experience of a line break with a notation that asks us to correct it retroactively. If you’re serious about the poem as a visual object, the indented overrun is the equivalent of cropping a Kline and noting its intended dimensions on a nearby placard. And how are we to read the line quoted above? Is the break deliberate, how it makes ‘bird’ hover for an instant before we arrive at ‘hovering?’ Or is it a widow without the false consolation of indention? To refuse to indent is to insist on the integrity of the poem as a spatiotemporal event while formally staging the inextricability of subject and object, one of Berssenbrugge’s chief concerns. When are breaks the work of a subject? When are they necessitated by the objective limitations of the page? The undecidability is the point. Neither a decasyllabic line, nor a line of prose, could register this tension.

I have tried to indicate briefly a few of the ways Berssenbrugge allows us to perceive the process of perception: by subtly interleaving abstract and concrete language and observation, by foregrounding the line as a temporal and spatial phenomenon and, in the latter poetry, by complicating the distinction between subjective and objective line breaks. Perhaps no other writer so ably captures, often by showing the impossibility of capturing, the experience of an embodied subject encountering the ‘perceptual solicitations’ of the object world.4 It’s an insistently philosophical project, but at no point is it cold. Its ultimate concern is the possibility of human connection, of identifying with or as an other, of momentarily overcoming the self, of testing the limits of our limits. She explores mothering, belonging, mourning, loving, etc., but instead of reducing these conditions to mere descriptions, her poems take us on journeys of perception that enable us to experience their common underlying structure.