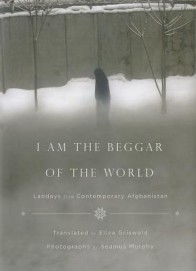 In my dream, I am the president.
When I awake, I am the beggar of the world.

This is a landay, an oral two-lined folk poem composed and sung by Afghanis. Consisting of twenty-two syllables—nine in the first line, and thirteen in the second—the poems usually do not rhyme, but in Eliza Griswold’s translations they often do, to add more zing to the English versions. The above landay, which provides the title phrase for this fascinating volume, gains even more poignancy when we know the circumstances behind it: in a refugee camp east of Jalalabad, an elderly woman named Ashaba watched over her dying husband. She felt helpless and afraid, emotions to which her landay gives a startling voice.

Landays are primarily composed and sung by Pashtun women in a culture where they are not to be seen or heard. That most of the women who compose and sing them are illiterate and voicing forbidden thoughts makes the folk couplets even more remarkable.

Griswold was initially drawn into the world of landays after hearing about an Afghani teenager who called herself Rahila Muska. Pulled out of school by her father, who feared she would be kidnapped or raped by warlords, Muska (“smile” in Pashto) turned to landays, which she heard on the radio. Soon she was calling the program to share her poems. When her brothers discovered she was composing poetry, they beat her. In protest, she set herself on fire and died. Here is the only landay that survives her (her notebooks were destroyed by her father and brothers):

Like many landays, this piece resonates because it speaks to the fate of most Afghani women, isolated by fathers and brothers in a society of arranged marriages, where a woman’s choice of her life partner is usually ignored. The lover in this poem, if not the male chosen by the family, may be afraid to respond to his beloved due to threats of violence. The second line of the landay can also be read as foreshadowing Muska’s demise.

Although landays are often about love and heartache, they cover other subjects, such as politics, separation, and war. While they usually comment on serious topics, when laced with humor they can sting, as seen in this poem:

Making love to an old man
is like fucking a shriveled cornstalk black with mold.

Griswold’s comments on the poems throughout the book provide needed context; her notes on this particular landay demonstrate the difficulties of translation. Here’s a literal translation of this poem: “Love or Sex or Marriage, Man, Old / Love or Sex or Marriage, Cornstalk, Black Fungal Blight.” Griswold didn’t know what to make of the poem until, she tells us, she was shown a blighted cornstalk—then she knew why the women who heard the poem recited were laughing. No wonder men fear landays!

Besides offering a window into Afghani culture, landays also relate the history of Afghanistan. Where a landay once referred to British soldiers occupying Afghanistan, this later became Russian, and now American. Words such as remote, for remote control weapons, and drone, for unmanned aerial vehicle, appear:

My Nabi was shot down by a drone.
May God destroy your sons, America, you murdered my own.

The author of this poem has lost her son to an American drone and vows vengeance, an all too common event in Afghanistan and Pakistan.

The black and white photography by Seamus Murphy complements the poems in subtle ways. In a picture of dozens of tents pitched in the desert, we see how survivors must live when their villages are destroyed. The note on this photo, “Dasht-e-Qala, Takhar Province, November 2000,” however, provides only skeletal information—it’s a shame more background is not given. It’s also too bad that the book doesn’t include the stunning color photographs of Murphy’s in the issue of Poetry (June 2013) devoted entirely devoted to Griswold’s landays.

For those who want to know more about the people of Afghanistan, how they view love and war, how they mourn, and how they survive, the poems and photographs in I Am the Beggar of the World offers much to entrance and disturb.