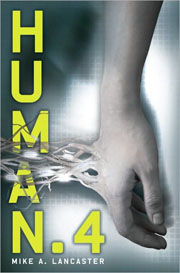 Human.4 is a clever book by a clever writer, but Mike Lancaster’s greatest asset is that he understands when cleverness goes too far. In his first YA book, Lancaster relies on familiar conceits, but even readers familiar with those conceits will find pleasure in his creative attempts to avoid cliché.

The novel begins as a typical fantasy story. Kyle Straker is a normal fifteen-year-old until he volunteers to be hypnotized at a local talent show. When he wakes, the entire town save for Kyle and his three fellow volunteers sits frozen in state of suspended animation. The four “survivors” split up to investigate: Kyle and his ex-girlfriend Lilly set off to explore the town while Mrs. O’Donnell, a local grocery clerk, tends to Mr. Peterson, the town mailman, who wakes muttering, “They are to us as we are to apes.”

Lancaster builds on this setup with a narrative frame that is more than window dressing. In a preface, he presents himself as a humble editor tasked with providing a transcription of three cassette tapes on which Kyle recorded his story. The editor intersperses footnotes into the transcription to Kyle’s cultural references, which initially provide comic relief: one explains “Teletubbies” as “a word of deep religious significance, referring to a collection of gods or goddesses almost exclusively worshipped by children.” However, when Mr. Peterson suggests that Kyle and his friends are being studied by higher beings, the scholarly footnotes appear more sinister.

While he’s not the first to present a novel as a transcription, Lancaster finds ways to make that structure serve his own purpose, and he never presses a conceit without cause. Perhaps the author’s craft is best revealed in the novel’s double ending. Kyle finds the hypnotist and appears close to finding answers, but the hypnotist suggests that he might simply snap his fingers and Kyle will wake up. The reader fears a hackneyed “‘it was all a dream” ending, and Lancaster teases readers by letting them see what that ending might look like: Kyle begins a new chapter where he tells how he woke from hypnosis, closing with a clichéd “we all lived happily ever after.” Yet that is followed with a chapter that opens: “Except that wasn’t what happened.” The false ending provides insight into Kyle’s motivations, and complicates his emotional state. Kyle’s processing of the event necessarily defines the arc of the novel.

For that reason, readers cannot get too frustrated with the fact that the actual ending feels like it could do more. Kyle comes to accept his new reality, but he glosses over the facts of his life in the new world he inhabits. The full reality of that new world contains complex emotional depths that Lancaster never sounds. Still, if not quite full-fledged invention, Human.4 is an enjoyable proof of an arresting concept.