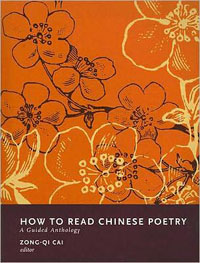 Implicit in the question How to Read Chinese Poetry is whether reading Chinese poetry is any different from reading non-Chinese poetry. If not, then what is the justification for a “guided anthology” such as this? And, for that matter, what is Chinese poetry? According to editor Zong-qi Cai, “This anthology features 143 famous poems composed over a period of almost three millennia stretching from the early Zhou [ca. 1027–256 BCE] all the way to the Qing, the last of China’s dynasties, which ended in 1911.” While this is a colossal span of history, it leaves out vernacular poetry written in modern Chinese in the last hundred years, often under the influence of Western poetry and forms. It is also a very small number of poems to represent three thousand years. The contributors make up for this lack by embedding these poems in essays discussing the poems and their historical, generic, linguistic, and cultural background and contexts. In this way the volume serves less as an anthology than as a primer, a starting point on a path leading the student to understand Chinese poetry better.

The student is the expected mindset—if not identity—for the reader of this volume: while the chapter-essays can of course be read in any order, they beg to be read as part of a course in pre-modern Chinese poetry, arranged chronologically, with a teacher who can provide further information and reading material. To complete the book the syllabus would likely need to double-up some readings, as rare is the college with a semester long enough to accommodate a chapter a week for eighteen weeks. Nevertheless, for the student who reads the full volume, the breadth of the Chinese poetic tradition and its habits of reading are the reward.

For the reader unaccustomed to assigned readings and classroom discourse, the volume presents certain challenges. The odd speech customs of American Sinology may require patience: “poetic text” for “poem,” “heptasyllabic” to describe a seven-character poetic line, “traditional” as a synonym for “pre-modern” or “classical” (as in, “many traditional commentators and modern scholars have expressed the belief. . .” [Xinda Lian]), and the overuse of Romanized Chinese in place of English translations, not only for sub-genres (e.g. shi, ci, sanqu, etc.), but also for titles and terminology (e.g. Shijing and Chuci, along with bi-xing, qing jing, fugu, etc.). While some of these professorial quirks do not inhibit understanding, others hide obstructive ideology: with “traditional” as closed and foregone, literary scholarship adheres to and reiterates a sharp break between China’s past and present, as if the two had nothing to do with each other. Other word choices, though, may in fact deserve thinking through: if “poetic text” requires that we differentiate our understanding of Chinese literature from more familiar, Western poetry, is that something we want to do?

How to Read Chinese Poetry seems designed for a classroom open to both East Asian Studies majors and wanderers from English departments interested in poetry “for its own sake.” While the attempt to unite these separate constituencies despite their separate agendas and interests is noble, its fallout goes beyond the perennial debate over the utility of poetry. The Chinese language, for instance, is also implicated, as the book seems conflicted over how to treat the range of Chinese knowledge amongst its readership: all poems are transcribed not only in Chinese characters but with Romanized pronunciation and tone-marks as well, whereas for names of authors and terms, no tone-marks are given, and anyone interested in the Chinese word must flip through the index. While the editor and publisher must have wanted to avoid intimidating students who do not know Chinese, the result is an emphasis on the sound of poetry unmatched by equal care about allowing students to discuss poetry in Chinese with Chinese speakers. And for all that, the structure of sounds in poetry is incomplete; the book gives no pronunciation guide to help students previously unexposed to the conventions of Chinese Romanization, and while non-speakers of Chinese can hear how the poems sound in Mandarin online (at www.cup.columbia.edu/static/cai-sound-files), what about the instances of Middle Chinese or older whose transcriptions find their way into the book? When we read Fusheng Wu say that “rhyming words. . . yōng and jiàng” were “pronounced in archaic Chinese as λiwoŋ and γeuŋ, respectively,” where do we go to find out what that means?

If these are problems for the East Asian Studies major, the problem for the English major or otherwise reader of poetry may be the caliber of translation. While Cai acknowledges—in what sounds like a critique of a style pioneered by Wai-lim Yip and Gary Snyder—that “In translation, many Chinese poems, especially those written in a highly condensed style, can easily appear hackneyed,” the translations written by these academics just as easily appear stilted, even lame. And while fine lines exist, such as the alliterative elegance of “Green, green grows the cypress on the hilltop, / Heap upon heap stand stones in mountain streams” (trans. Zong-qi Cai), or the understatement of “Tear-laden ink is gray and dull with dust” (trans. Shuen-fu Lin), more often there are lines of such clunking dullness as “The Seven Beginnings and the Beginning of Quintessence of Myriad Things, / Are sung solemnly in harmony. / The gods will come enjoying the banquet, / We sincerely hope they will listen to the music” (trans. Jui-lung Su).

But while some of the scholars have attempted art in their translations—such as Charles Egan’s use of punctuation in his chapter on Quatrains, or Xinda Lian’s bawdy rhyme in his chapter on songs under the Mongols—the inattention to translation manifests the absence of discussion of how translation affects our understanding and appreciation of poetry. The book includes no discussion, for instance, of the meaning behind Xiaofei Tian’s translation of jiŭ as “ale” while everyone else makes it “wine.” The ways that different scholars approach the dueling demands of philological accuracy and English affect—along with the intemperate states of both—presents a missed opportunity to discuss the different points of entry into reading Chinese poetry. Likewise, the volume gives no discussion of the differences between different translations of the same poem, such as “Sui Palace,” by Late Tang poet Li Shangyin, as translated by Robert Ashmore—

Purple Spring palace halls lay locked in mist and haze;
he wanted to take the “ruined city” as a home of emperors.
The jade seal: if not because it returned to the sun’s corner,
brocade sails: they would have arrived at heaven’s bounds.
To this day, the rotting grass is without fireflies’ flash;
through all time, the drooping willows have sundown crows.
Beneath the earth, if he should meet the Latter Lord of Chen,
would it be fitting to ask again to hear “Flowers in the Rear Courtyard”?

—or as translated by Zong-qi Cai—

Purple Spring’s palace halls lay locked in the twilight mist;
He wished to make the Overgrown City a home of emperors.
The jade seal: if it had not somehow become the Sun-horn’s,
Brocade sails, then, would have reached heaven’s end.
To this day the rotten grass is without fireflies’ flash,
From antiquity lie the drooping willows, with the sunset crows.
Beneath the earth, if he would run into the Latter Lord of Chen,
How could it be fitting to ask about “Rear Courtyard Flowers”?

The pervasive ignorance of translation also means that Chinese poetry’s cross-cultural relationships get little attention: some writers, particularly Cai and William Nienhauser, cite other poetic traditions, but Ezra Pound and Ernest Fenollosa only get one mention, and Chinese influence on Japanese, Korean, and Vietnamese poetry is not discussed at all. Conversely, foreign influence on Chinese poetry is downplayed: Wendy Swartz’s section on Xie Lingyun does not mention his Buddhism, and while Xiaofei Tian analyzes the Buddhist elements of Chinese palace-style poetry, by not mentioning the ways in which Sanskrit poetics may have influenced Chinese prosody, she leaves foreign influence a matter of content only, and never form. Conversely, when Maija Bell Samei introduces the song lyric genre as stemming from a time when “new music from Central Asia began entering China and soon became all the rage at the cosmopolitan Tang court and in Tang urban culture,” the topic is never mentioned again, suggesting that foreign influence is only a matter of form, and not of content.

But while these slips represent significant deficiencies in the study of Chinese poetry, they are quibbles against the overall success of How to Read Chinese Poetry, and any good teacher would be able to incorporate these points into the lesson plan. The strengths of the book, undiminished by its imperfections, appear in the elegance and facility with which the contributors engage with and explain the language beneath (not beyond) translation. In their discussions of Du Fu and Li Shangyin, two of Chinese history’s most persistently hermetic poets, Robert Ashmore and Zong-qi Cai demonstrate the vagaries and ambiguities of Chinese poetic language at its highest. Similarly, David Knechtges’s examination of the rhymeprose of Sima Xiangru displays an erudite mastery of Sima’s poetic erudition. The possibility the volume provides for the reader to see many layers of the poems at the same time defines the book’s value; what Paula Varsano says about one poem by Li Bai holds true for the book’s manifold perspective on its poems: “The convergence of these multiple readings is precisely what yields the intoxicating sense of the impossibility of discerning, with our eyes, the causes of the events that unfurl before us, or of grasping the true, quixotic nature of the relationships among things.”

If the East Asian Studies major can learn how to appreciate the depths of poetic heritage within an otherwise business- or politics-focused pursuit, what can the non-student reader of poetry learn from How to Read Chinese Poetry? While the question of the title is never answered directly, by oblique example we understand the interrelationship between poetry and history, and to read Ronald Egan’s chapter on how the Song dynastic history shaped its poetics, or Grace Fong on the influx of women poets in the late imperial era, is to begin to understand both how and why. As Xiaofei Tian explains, “in appreciating the poetry of a different age, we should take its historical and cultural contexts into account,” but are historical and cultural contexts any less important for appreciating the poetry of our own age? Against a still prevalent idea that Western poetry can be read simply as rhetoric, the contemporary American poetry-reader can learn from a Chinese scholarly tradition that has never had much patience for such ahistoricism. Poetry everywhere is infused with its own history, and rather than the Joycean “History is a nightmare from which I’m trying to awake,” history is for classical Chinese poets more often a dream they are trying to comprehend and control. In its scholarly awareness of the relationship between poetic lines and historical context, readers of poetry in any language can learn from the critical traditions, as much as the poems, of Chinese poetry, and glean from How to Read Chinese Poetry the answer to the question of how to read poetry.