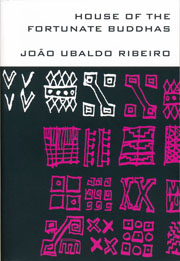 João Ubaldo Ribeiro’s House of the Fortunate Buddhasrevels in the bygone Olympia Press tradition of literary erotica. Recently translated into English, the novel was originally commissioned by Brazilian publishers Editora Objetiva for a series on the seven daily sins. Ribeiro chose lust, a theme that he weaves into a hyper-sexual satire of the confessional memoir; his book becomes “a socio-historio-literary-pornographic testimony” that asks:what is the nature of lust and why do we repress it?

Our unnamed, uninhibited narrator recounts her life in post-World War II Brazil, where she liberated herself from reactionary society through polyamory, incest, and bestiality. “Life is short,” she says, “to hell with being square.” Out of her effusive anti-narrative rises a unique form of lipstick feminism, in which sex becomes the prime eradicator of traditional, Hester Prynne-ian male dominance:

it’s sad . . . to live in a society where a woman’s honor is located between her legs—my God, how stupid. Isn’t it, isn’t it? Sometimes I feel like holding a rally. How many lives have been lost, how many fates have been ruined, how many tragedies have occurred, how many convents have been inhumanely overcrowded, because of the honor of so many, many unhappy women?

However, Ribeiro raises the question: is this point of view a true denial of male domination or simply one of its polyphonic consequences? For example, many of the narrator’s sexual impulses are linked to childhood trauma, an unfulfilled Electra complex, and a quite fulfilled lust with her brother Adolfo. One of the more compelling issues at the heart of the novel is how our narrator’s sense of lust becomes mixed up with other, darker impulses—manipulation, dominance, violence. Yet this synesthetic dilemma is shown to be infinitely preferable to the gloomier obverse: succumbing to the hold of the “phallocratic society,” which, by refusing to be honest with its own impulses and biology, lives in Glauconian darkness about its true nature. InHouse of the Fortunate Buddhas, freedom is sexual freedom, with pleasure found in its attainment in spite of men and not because of them. Through this doorway lies not only a subversion of the traditional male narrative, but an actual path to spiritual enlightenment. Evoking the Buddhas in the novel’s title—a poetic roomful of gold statuettes—Ribeiro goes to great lengths to show that all religions practice an absurd polytheism, with “saints in place of specialized gods.” Our narrator claims that she is truly the only monothesist, her religion being the call of lust, which in actuality is the voice of God. We have to only listen to this voice to know what we must do to achieve completion.

It is interesting to note that if House of the Fortunate Buddhas had been published in the time period in which it is set, it would have been illegal in many places. Written in a defiantly sexual style reminiscent of Anaïs Nin, the novel only occasionally missteps in its characterization of a sexually free woman in the 1950s, such as when Ribeiro writes that female motivation for group sex is to make a man feel like a “king for the day.” Yet, Ribeiro manages to take a rather simple thesis— “life is fucking”—to the limits of our reckoning, and then beyond, into matters as cosmic as they are personal:

I embodied all the goddesses of love, all the insolent she-devils that people the universe, Lust with its treacherous, wriggling shadows and its immoral banners, its summons to debauchery and dissipation, to complete surrender to the delights of every shade and color that lead to a lascivious death.