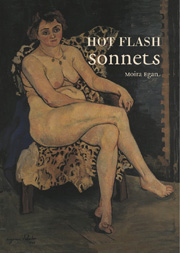 I bought Hot Flash Sonnets assuming it was a sequel to the anthology coedited by Moira Egan, Hot Sonnets (Entasis Press, 2011), a collection of sexy sonnets about and by women. It both is and isn’t: though these poems are all Egan’s, the title, perspective, and style evoke the anthology. Yet where the anthology is a luxurious romp, Egan’s new volume details the unsexy and unsettling symptoms of how “we euphemize this ‘moon of pause,’” through a sequence of sonnets with titles like “Insomnia,” “Weight Gain,” “Dryness,” and “Clicking Knee.” Her tonal range sweeps from sarcasm to panic to sorrow, often within the same poem. In this book, she performs one of the greatest gifts of poetry: to remind us (well, at least us girls) that we’re not alone.

The volume opens with the hilarious “What the Flesh Is Heir To,” which proposes a “menopause kit” analogous to the first period kits distributed to preteens:

Dear Kimberly-Clark:
We have some suggestions.
We need Kleenex, Lightdays, and also sage
Advice about the menopausal question:
To HRT or not.           Soy? Calcium?
And could you please throw in some Halcion?

There are several cleverly wry moments, as in “Confused Complexion” when, after finding a zit next to a crow’s foot, Egan declares “I object to this correlative”; or in an ode to the female Viagra, “Femystique®”:

The “Mood Swing” poems are especially deft, making use of the sonnet’s structural turn to illustrate via metaphor the violent change of stormy weather, a cat’s temper, or a riptide.

The sonnet sequence is central to this project’s subversiveness. Traditionally, the woman is the object of desire: Petrarch’s Laura or Dante’s Beatrice, as alluded to in “Arnica.” Here, Egan inscribes herself into the sonnet sequence, and though the topic is still desire (or the waning of it), and though she’s often humorous, she highlights a crucial theme—one Egan states baldly in “Things That Disappear,” via a friend’s plea, “You have to write about the things that vanish!”, and in the stark first line of “Two Middle-Aged Women Walk Into a Bar,” “I think at fifty women disappear.” This sonnet sequence brings into sharp focus the experiences of women who aren’t supposed to signify—who, having outlasted their sexual relevance in a culture that worships youth, are expected to dissipate gracefully.

As Tina Fey has noted, show business dismisses “a woman who keeps talking even after no one wants to fuck her anymore.” Even poetry, with its Younger Poets Prizes and lists of hotshots “Under 30,” isn’t immune from fetishizing the young. Yet Egan refuses to go gentle, declaiming “O fucking menopause. O for a muse / of estrogen.” This is why we need a book like Hot Flash Sonnets. Moira Egan, please, keep talking.