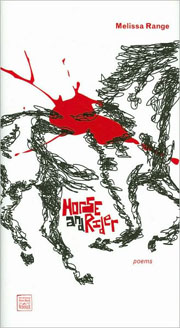 Recently, at a poetry panel somewhere in the Midwest, a traveler from New York stood up. “Where is the terror?” he shouted at the five poets sitting in front of the room. “We in New York live with terror. We have planes coming at us every day and it’s only a matter of time before one of them takes something else down. Why isn’t that in your poetry?”

The traveler’s quarrel is not particularly unique; a common complaint against poetry these days is that it has little to do with the “real world.” Poets, the critics contend, are self-indulgent and disassociated, and lyrical excess has overcome any sort of social obligation; conversely they sometimes argue that social obligation in poetry is simply the rehashing of clichéd ideals. What readers such as the traveler from New York seem to want is an overt expression of our age’s unpredictable violence and the fear that we may all become victims of it. But contemporary poetry often shies away from the overt metaphor, and many argue that this is its power—poetry is for the mind, an arabesque of image and language, inner voice talking to inner voice so that we can overhear and make meaning from the conversation.

Melissa Range, a Walt McDonald First Book award winner, actually bridges the gap between the necessity of interiority and the necessity of speaking to the world. She writes about violence and its sublimated terror, yet Range has managed to attack the subject without losing the quiet edge that sets poetry apart from the loud mainstream of postmodern culture.

Each poem in Horse and Rider is dedicated to one aspect of warfare, be it a portrait of Achilles walking the beach after battle, a self-portrait of Samson, or the devices of war themselves: each poem in part two of the collection, “The Warhorse,” gives voice to an accouterment of the battlefield. “The Battle-Axe,” for instance, speaks directly to the reader:

Because not every yeoman can afford
a sword, I make myself available
for more than farm or forest chores.

The reserve, what is left unspoken, is what is spookiest about these lines. “I make myself available” the Battle Axe says to us, its gristly psychopathology glaring between the lines. But then, like a true assassin, the Axe is proud of its ability to hew and rend:

I’ve bisected the breastplate, hewn
the helm, and beheaded the berserker
while the knight’s still reaching for his scabbard.

Nevertheless, none of us, not even the formidable Axe, is free from class warfare: “But still, they want to battle and to die / by a princely, pricey sword” the Axe laments a line later. The hand grenade, the javelin, even the marginalized tent peg get their turn at the dramatic monologue. “They’ve sown your field with dragon’s teeth,” the Landmine says, “That’s me: a sheathed spark, a seething seed.” The Arrow taunts ravenously: “Bonnie boy, I’ll get beneath your bodice: / I’m the bodkin that flies broad and lodges deep.” The Trebuchet (a medieval catapult used in siege warfare) is actually rather introspective: “Like you, I’m an ingenious engine,” it says to the reader, “the union of force and intellect.” We, like the missile launchers of yore, are force and intellect; we too, Range seems to be telling us, are ye olde engines of death.

Other poems in the book explore less usual suspects. “The Canary” is victim to the mine blast. “Dragging Canoe” paraphrases Chief Tsiyu Gansini of the Cherokee nation and leader of the Chickamauga resistance on the American Frontier: “I’m a child of this dark and bloody ground,” the character says, revitalizing one of the Chief’s most famous statements. A “Prayer” is “An axe-blow like a pallet through the roof, // a mallet that can flurry monoliths / to sand.”

Horse and Rider takes us to the realization that there is nothing particularly unique about fearing the suicide bomber or the hijacker; violence, war, and the sociopathic willingness to kill and maim is as old as humanity. The battle-axe and the hand grenade have exactly the same purpose, even the same register. In a singular and smart voice, Range speaks directly to the Western reader during a time of warfare; at the same time, she speaks to the long and bloody memory of our species and to any reader of any time or place.