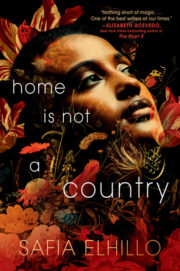 by Carlos A. Pittella

Safia Elhillo’s Home Is Not a Country may be a young adult novel in verse, but it could just as well be shelved with poetry or fiction for older audiences. No label would change its triumph of addressing cultural identity and belonging while being relatable to those a similar age to Nima, the book’s 14-year-old narrator.

Self-conscious of her accent in English that she “cannot manage to make charming,” Nima also struggles with Arabic, which she and her best friend, Haitham, learn in Sunday school: “we mispronounce the language       how it wilts / on our american tongues.” Accented in both worlds, Nima feels she doesn’t fully belong to either. Through the eyes of Nima, Elhillo stares at the gaps of a personal and collective history, challenging silences. There is the silence of what Nima does not know but desperately wants to, and there is xenophobia and the silent witnesses that allow it, when Nima and her mom are denied boarding into a plane or when Nima is called a terrorist and suspended from school for fighting back against four bullies. Haitham seems at first to fit in better, but then becomes a victim of post-9/11 racist violence, driving Nima further into her quest for what’s missing from her life.

Formally, the text of this book speaks strongly to Nima’s uncertainty and sense of loss. Elhillo avoids capitalization (i, nima, haitham are always in lowercase) as well as punctuation (pauses are indicated by spaces and line breaks, as in open-field poetry). One glaring absence is Nima’s father, whom she never met. She only knows he died in their homeland and that his death is connected to why Nima is not called Yasmeen, the name she wishes she had:

Feeling inadequate in her own name (which means grace), Nima summons Yasmeen, the ghost of her alternative Self. Nima is called many things, some affectionate, some not, and throughout the novel she weighs how fitting they seem as ways to name her Self. Haitham fondly calls her “nostalgia monster,” laughing, as Nima explains,

For Nima, these cultural fragments reveal “a country i’ve never seen / outside a photograph // & i miss it too”—the country that both her and Haitham’s mothers left. Readers can assume the country to be Sudan (Elhillo is Sudanese-American); but because it goes unnamed, it stands for any of the places evoked by “the old songs” Nima loves: Egypt, Lebanon, Iran, and Sudan. Through a magical portal, she enters the old photographs with the help of Yasmeen—running the risk of becoming a ghost herself. Nima must then choose between either accepting who she is or erasing part of herself. Thus, the book becomes a story about agency and the choices that make us who we are.