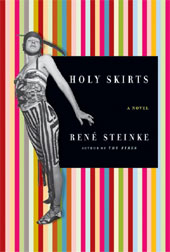 It’s not sure whether the end of the century will be noted by the striking of typewriter keys or the blast of a horn, but many artists in these days of disposable apocalypse are standing in line for their chance to chronicle the last shovel full of dirt onto the past century. The strange thing is that those notes may have already been compiled by the Baroness's Elsa von Freytag-Loringhoven, poet, artist, and subject of Holy Skirts, René Steinke’s novelistic exploration of the Baroness’ life, its scraps and fashions. Steinke’s novel chronicles this woman who carves her artistic identity in an age that still believes in the self. Born in Germany, the Baroness ends up in World War I New York and crafts her poems from a common American language—the popular music, conversations, and advertisements that she hears in the streets. Yet, Steinke’s novel is not another example of historical fiction, an imagined life of a living poet. Instead, the novel plays within the linguistic abrasions of the city, the language that Elsa picks up on the streets and within commercial culture. Steinke explores how a world is strung along these gathered bits of language, the poetic and psychological scraps that become the framework in which her artistic life is explored.

Steinke’s fiction measures a life lived out of time, cataloguing Elsa’s seemingly irrational, vacuous poems and how easily she disappears amidst the early century’s passing materiality. In Germany, Elsa hides herself in a man’s second-hand suit and a monocle as easily as men around her hide behind their Kaiser-like mustaches. Among a collection of Berlin chorus girls, Elsa disguises herself with a pair of cardboard breasts that hilariously slide down to the front of her pelvis during a show. Following a lover to New York, she vanishes among the flags hung in the shop windows of a pre-Weimar America. Here, she hones her craft—piecing herself together in language and collecting her wardrobe from things tossed into the trash. Chewing gum wrappers for jewelry. A blinking light positioned above her behind, a cincture that draws the eye of Marcel Duchamp. Her poetry develops as fragments, appearing piecemeal in The Little Review, and modernity breaks like a wave around her, a future strung from the past. She becomes a muse of sorts for the cold but stricken Marcel.

The novel’s central moment opens around a rumored short film in which Man Ray captures Marcel shaving Elsa’s pubic hair. Excited by the prospect of this promised work, another man later asks, “Is (the film) Cubist? Is it Futurist?” Marcel gives his measured explanation, “The Baroness is not a Futurist. She is the future.” Elsa lives and works in anticipation of the film’s release, but when the film is destroyed in processing, Marcel just as coldly explains, “Our friend said the strips stuck together in the chemicals. . . It was an experiment. The technology isn’t ready for us apparently.” The film, and art itself, is the rumor left behind as its material gets swallowed by the enticing, but failed, technology.

Despite Elsa’s verse and outrageous wardrobe, Steinke’s writing depicts the Baroness just as much a rumor, a life overheard. As a girl, Elsa hurls a batch of early poems into the fire when her mother responds to them with nonchalance. In the cities, she throws herself easily from one sexual encounter to another. Others’ charges of “purposelessness” in her life sting her. She breaks into The Little Review’s New York offices in a ferocious attempt to steal negative letters written to the magazine about her poetry. Returning to Paris after World War I, her “aloneness” remains “huge”; she lives in a one-franc apartment with rented furniture.

The easy summation here would be to point to the artist’s fragmentation in the face of modernity, to mumble something about postmodernity “not coming in non-refundable bottles.” Yet in the novel’s narration, Elsa adeptly plays herself as a rumor. The odd thing that Steinke develops here is how Elsa inhabits her own body, while the century seems to disappear around her. Perhaps, this is the artist’s test. Just as a painter-friend reads the wartime daily newspaper with one eye covered, Elsa reads the past. In a moment of defiance, she enters the wing of an Italian museum populated by ancient male nudes and is escorted out by angry guards who fold their hands across her eyes. As an artist, Elsa similarly reads the city, wanting to “write a poem that resembled walking in a crowd across Forty-Second Street.” Amid the shining, chewing gum wrappers and bits of accumulated language, her poems become “happy accidents,” the residue of a life in the city, itself “already a poem” in Elsa’s covered eyes.

Holy Skirts upholds this fragmenting vision of the artist, but not with what Elsa herself would brand “fake melancholy.” As she poses for painters and plays herself on New York’s streets, her art passes as a rumor against the relief of artistic posers and boys going off to war. The ironies are that this rumored art is just as striking and certain as the details of how the poet leaves her own body to find it. And against the poems, the century passes, “gray and loose and unnoticed.”