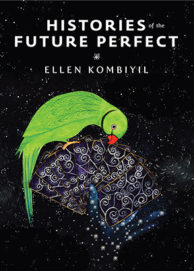 A normal day in a normal person’s life is extremely normal. There are no blips of exuberance or spontaneous spurts of sadness. Every action, every thought and every morsel of imagination is defined, eventually, by boundaries of different shades. The shades change, the distances increase and decrease as the boundaries heave and sigh, expanding and contracting. What if we let loose the knotted worn shoelaces and maddeningly zoomed in and out and swivelled across expansive distances? What if we stay static at a point and let ourselves radiate into obscurity?

Such are the questions (if they are to be questioned at all) that rear their head time and again in Ellen Kombiyil’s Histories of the Future Perfect. The poet uses boundaries as launch pads to careen from one galactic experience to the other, occasionally returning to the ground—a pit-stop sometimes, a sobering effect at other times, and a smattering of polaroid reminiscences in the gaps:

of me in another life. I am caught
mid-frame, frozen and spliced, this slice
of my life not mine but could be mine,
the heel of my high heel lifting

Kombiyil constantly attempts to fit fragments of disparate imaginations within the width of a uni-directional narrative; moments decked with rich elements shimmer through the layers and build a life of their own. As one starts moving through the poem, these moments come together to create conflicts in one moment while maddeningly rushing back and forth to create a tentative sense of euphoria in another:

Even while collisions—real or unreal, intended or spontaneous, pleasurable or excruciating—are common incidents in Kombiyil’s poetry, there is a lingering sense of detachment, a sense of loss and a sense of attraction-that-detracts. We constantly yearn to hold onto intimate streams of thoughts and memories, and the more one nurtures them, the more they grow and create new canvases. Eventually, the colours and the patterns grow lives of their own and become unfamiliar. It is the same unfamiliarity that has been beautifully woven to expose different experiences of the past and create new experiences through this very act: “the knowledge / that fuchsia can look gray in photographs.”

The sense of incessant retrospection translates into a constant desire to be in transit. An incessant longing for the imagined translates into multidirectional movements that expose the relative ease with which static existence can be dissolved at will. Dissolution of one’s present surroundings leads to free movement that, in turn, leads to rapid mutation of sights and sounds. It is this very experience that is transferred to the third person and as the transfer happens, the very shape of the experience transforms so much so that the memory of the poet becomes a personal memory of the reader herself. The poem becomes a chameleon and creates different paintings for different eyes.

In between the images and incessant movements, one can find the poet imagining alternate experiences through the eyes of Mary Todd Lincoln or Ida Saxon McKinley or even Kurt Cobain. These accounts, too, are not always bereft of memories. An impressive interplay of memories and imagination also help in sending along messages that flow as undercurrents over a long period of time and spill over on the unsuspecting reader. The resulting effect is an instant connection with the raw message, followed by a realization that not much has changed and that a preserved gray memory/message created by a third person can re-incarnate at will whenever and wherever. Take, for instance, “Eliza Johnson’s Letter To Martha, May 1865,” where there is an instant connect with the political atmosphere of our times:

The nation has soured, brother turned against
brother, yet don’t burden him with grand visions.
Remind him, he is a plain man from Tennessee
and too much will not be expected.

Kombiyil’s book is less a book and more of a companion to moments, or journeys. As you reach a point of time (or a destination of any kind), you look back at the path you traveled only to realize that there is a new one calling out to you—a new point to travel to, an incessant restlessness. Let this book be your faithful companion as you permeate and mutate and get lost along the way.