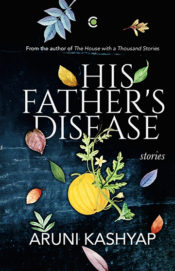 The ten stories in Aruni Kashyap’s His Father’s Disease share a discussion about the struggles of finding community and acceptance, whether as a result of sexuality, relocation, or misunderstandings based on perceived cultural awareness. The stories are almost evenly divided between those set in Assam, India, and those set in Minnesota, USA. The opening story, “Skylark Girl,” bridges this divide by taking place at an international academic conference.

“Skylark Girl” sets the tone for the stories that follow by carefully staging cultural misunderstandings and expectations in a setting where minds should, perhaps, be the most open and willing to learn, rather than shut down by pre-drawn conclusions. Sanjib’s telling of the Assamese folktale “Tejimola” disturbs his audience, but for the wrong reasons. Rather than reacting to the story on its merits, Sanjib’s academic peers ask why he is rewriting an old myth instead of writing about the current conflict and trauma in Assam. In fixating on the author failing to meet their expectations, Sanjib’s audience fails to address the conflict, drama, and trauma within the story Sanjib has just read.

The story that resonates across cultures and yet still speaks to the divisions present in the other stories is “Umricans.” The second-person point of view makes this very personal story—about leaving home, establishing oneself, and dealing with loss—universal. Though the story is about breaking out into the world, it is also about the struggles of immigrants to establish a new sense of community and home away from their place of birth. Further, it is about the longing to return home and the obstacles that prevent it from happening.

Additionally, the collection deals with cultural divides within India and the simplified western perception of a unified “south Asia,” a region consisting of eight countries and over 1.8 billion people. Stories like “For the Greater Common Good,” “Skylark Girl,” and, to a lesser extent, “Before the Bullet” contain elements of magical realism; suicide is also a reoccurring theme, and food plays a major role in several stories.

Much like Sanjib’s story in the collection’s opening, even when Kashyap’s characters aren’t talking about it and are far from home, they are coping with living under the shadow of perpetual war. The fingers of war creep into their folktales, love lives, and certainly their anxieties for family back home. And yet, despite the dark themes, most of Kashyap’s stories have a dry sense of humor and occasionally make the reader laugh out loud.