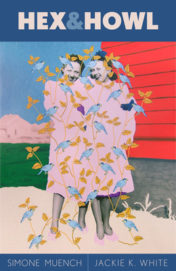 In their collaborative chapbook Hex & Howl, Simone Muench and Jackie K. White take a firm stance on feminism and women’s empowerment by detailing suffering, self-care, and rebirth. Muench and White set the pace at a slow crawl, growing from patriarchal representations of women to strong, subversive feminist models, as can be gleaned from the title poem that begins Section I:

You studied the orange girls, cinema
gazes, wounded bodies, and angles
that wolves unbend. I looked through the eyes
of chameleons, the nightmare houses they

You and I were told to swallow
our hexed howling, refuse the reptilian

and the mammalian, unless it’s tame

Here, men may look at women’s “wounded” bodies through their male gaze, but women look into each other’s cold-blooded, reptilian eyes. The mention of “hexed howling” evokes a sense of magic intermingled with these animalistic features, making women the one thing men fear: powerful creatures. Women’s powers have lain dormant under the shackles of patriarchy; their magic energy threatens the social order. The narrator argues that women will no longer accept this “gnawing // on our bones by canonized men,” that “we’ll not be suckled or bled / to ghosts again. We’re the heart’s rattle, / razored at our core. Full of sharp.”

This razor-sharp picture of women cuts through the core of the collection as it continues to Section II, which is comprised of self-portrait poems. The idea of a self-portrait is inherently injected with agency; the poems in Section II work towards self-actualization as the narrator writes herself out of patriarchal expectations. The work done to understand one’s place in the world in the self-portrait poems then transitions to the resistance poems of Section III. “Disclosure” claims “that nakedness / you love refigures any space you choose.” The woman’s body is no longer clothed in Section III; she revels in nakedness and the shamelessness of her form. “Queue” takes us back to Section I and reminds us of the “shimmering footage of girls,” footage that was initially seen through the “cinema gaze.” The narrator subverts the expectations of Section I, however: The men don’t control the show anymore. “We know how to let loose on our own / terms, tango or two-step, and in our own time.”

At the close of Hex & Howl, the narrator reaches her “Rebuttal.” In a culmination of assertiveness, she claims that “our tongues will not be bridled / as though miniature ponies put out to pasture. / Nor will our tales be jeered as old-wives’ blather.” The women’s “sound surges through / hex                               into galloping hymn.” The book ends on an uplifting, poignant feeling as hexes and hymns alike echo on the page and women are released from the shackles of patriarchal standards and expectations. Muench and White create a hero’s journey, one that gathers readers and guides them through the battle against oppression. The fight is not easy or comfortable, but it is necessary and worthwhile. After living as demure mammals, “we slip off the human and prowl.” Hex & Howl is a shining example of women’s struggle, a reminder to fight for their voices, even though the path to equality is lined with obstacles.