The superhero epic may have reached its deconstructive apex with the 1986 publication of Alan Moore and Dave Gibbons’s astonishing Watchmen, but its intricate latticework has strong roots in at least one group of comics from a decade earlier: the four simultaneously released titles from the early ’70s that comprise Jack Kirby’s so-called “Fourth World.” Continuing storylines are nothing new of course—the comics medium lends itself to serial narrative, and “to be continued” is a tagline appended to many a mini-saga (thought its grandeur perhaps originated with Kirby and Stan Lee’s three-issue Galactus story from Fantastic Four in the mid-’60s)—but Kirby’s Fourth World raised the bar. One can finally appreciate just how much with the release of Jack Kirby’s Fourth World Omnibus (DC Comics, $49.99 each); these collections present the original material in color (a significant element in Kirby’s comics grammar, it seems to me) and in chronological order of publication, rather than by series. 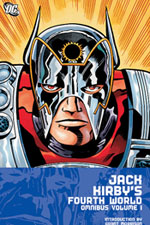 This latter decision is a substantial innovation. Kirby, who had defected to DC from Marvel Comics in order to gain greater authorial control over his creations, hadn’t conceived of writing a lengthy linear tale across his four series; at the same time, there is a massive teleology involved, and reading the titles as they appeared allows one to experience its subtle growth. All the Fourth World books involve a cosmic war among “New Gods,” but it is played out in different tempos and tones: as Walter Simonson eloquently puts it in his introduction to the second volume, “The New Gods is the story from the perspective of the great warriors themselves. . . The Forever People follows the exploits of the young, the children of the gods for whom the ‘cold game of the butcher’ is still high adventure. . . In Mister Miracle we encounter the conscientious objector—an echo of the times. . . in Jimmy Olsen, we see the effects of the war among mortals.” Of course, the unraveling of this cosmic conflict invokes the highest comic-book stakes there are: whether good or evil will prevail, or in Kirby’s terms, Life or “Anti-Life.”

DC indeed gave Kirby free rein; he wrote, drew, and even edited all four books, a level of creative control unheard of in corporate comics of the time. With the exception of Jimmy Olsen—reportedly chosen by Kirby to integrate into his Fourth World because it was DC’s worst-selling title—all the titles represent Kirby’s unfettered originality (and even Jimmy Olsen barely resembles itself, injected with Kirby creations such as the Newsboy Legion, the DNAliens, the Project, the Hairies, and Intergang—indeed, the eponymous character seems at times like mere scaffolding, and the requisite presence of Jimmy’s “pal” Superman fares even worse; Kirby seems to have no interest in even drawing the iconic character correctly, whereas his own creations crackle with energy). And Kirby makes the most of his authorial freedom; one senses on every page how driven he is to tell this tale. As Grant Morrison, no slouch when it comes to the surreal comic book narrative, sums up in his introduction to Volume One, “Here is a post-War prophetic vision that reaches to the heights of the holy ineffable and plummets to the lowest cellars of cruelty in search of the monstrous will to power and its roots in pain and loss.” 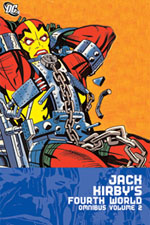 Tellingly, the villains of the tale—Darkseid and his henchman Desaad, who hail from the horrific world of Apokolips (Kirby wasn’t one to hide his allegorical intentions: the light world is called New Genesis; Mister Miracle, an escapee from Apokolips, is named Scott Free), as well as the earthbound yet no less chilling Morgan Edge (whose Galaxy Broadcasting System has bought out the once wholesome Daily Planet; Kirby was ahead of the curve in making a corporate CEO the big bad)—are rife with complexity, as are the two main heroes, Orion (a New God with ties to both New Genesis and Apokolips) and the aforementioned Scott Free, whose identity as the super-escape artist Mister Miracle provides both sheer comic book fun and a metaphor for the will to survive. Throw in other Kirby innovations such as Mother Box, the Source, Infinity Man, the Anti-Life Equation, Boom Tubes, and more (not to mention an awkward yet truly bizarre guest-starring appearance by comedian Don Rickles), and the result is a level of creativity well worth this archival presentation.

Like a handful of other professionals in the comic industry, Kirby is regarded with awe by both readers and creators—Morrison calls him “a master magician, a Renaissance intellect, a Beat philosopher, and. . . a creative artist without peer”—and his Fourth World epic demonstrates why the hagiography is well-deserved while at the same time sketching its limits. Most notably, Kirby does not have the same gift for the nuances of speech that many other writers, including his former collaborator Stan Lee, possess; his skill lies in laying out strokes broad and loud, and in this his work bears greater similarity to Greek tragedy (indeed, the Forever People especially comprise a chorus) than to the realism comics were pursuing in the quest for respectability and relevance. Such an approach gives the Fourth World saga an anachronistic and overblown feel, which may not sit well tonally with some readers. But one sees immediately why Kirby’s pages are so revered: an amazing amount of things happen in a Kirby comic, and those happenings are related with a fluid grace that often borders on the sublime. Even individual panels are packed with emotion, information, and astute artistic choices; whether presenting a cosmic battle or a person crossing the street, Kirby draws each with the same level of intensity, using off-kilter angles and an expressionistic color palette to keep the reader on edge. This constitutes great storytelling, and it should be praised, even if the praise occasionally becomes as melodramatic as, say, an epic superhero comic.

Kirby’s multi-series saga may have influenced the ambition of Watchmen and other epic tales, but it was also a precursor to the current penchant for the constant crossovers and dense sagas that comics publishers now regularly foist on their readerships, intentionally conflated and confusing storylines that sell big events in a given superhero “world” as essential to the understanding of that world. As Douglas Wolk puts it in his superb critical work Reading Comics, “picking up a superhero comic right now, if you’re not already immersed in that world, is likely to make you feel simultaneously talked down to and baffled by the endless references to stuff you’re already supposed to know.” It’s a problem in which the aesthetic and branding concerns of superhero comics often clash, and it results in most current epics being unreadable reams of forgettable nonsense. One recent epic that escapes this pitfall as deftly as Mister Miracle avoids Doctor Vundabar’s Murder Machine is 52 (DC Comics, $19.99 each), a story that appeared in weekly installments over the course of a year (hence the title) and is now being collected in graphic novels; as of this writing the first two volumes (of four) have been released. 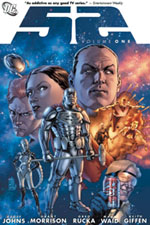 On the surface, 52 seems like it would be a train wreck. A weekly publication schedule is a punishing commitment for all involved (most comics are published monthly, and many of those reflect haste and carelessness); likewise, having multiple creators, no matter how talented, collaborate and turn out an artistically unified project is iffy, and the concept—to relate a year in which the iconic heroes Superman, Batman and Wonder Woman have gone missing and a horde of lesser-known characters have to step up to the plate—seems like exactly the kind of insider pool Wolk describes as problematic. Yet somehow the work not only coheres but is narratively quite gripping. On the visual side this is largely due to having a single artist, in this case the highly capable Kieth Giffen, do all the breakdowns for various pencillers and inkers to follow; thus, despite the many hands involved, there is a consistent texture to the art, a consistent flow to the storytelling structure. This wouldn’t have saved the book if it weren’t well written, but it smartly nips a potential problem in the bud.

As for those well-written words, DC chose wisely: the four writers involved (Geoff Johns, Grant Morrison, Greg Rucka, and Mark Waid) not only all have pedigrees in epic storytelling, but they have different strengths as writers. Rucka, for example, has written prose thrillers as well as comics, and detective comics as well as superhero comics; these hallmarks can be found in the hard-boiled cop story that roots 52 in the “real” world of character and intrigue. Waid and Johns have distinguished themselves as deft and often comedic writers of superhero comics, able to keep one eye on manipulating plot and the other on character development. A third eye might be employed by Morrison, the resident surrealist of the bunch, whose quirky yet seamlessly integrated storytelling devices allow the inherent ridiculousness of the fable to make a kind of postmodern sense. All four writers seem to be performing at their best, perhaps driven by the need not to be outshined by the others; at any rate, the result is an actual story with layers rather than a pastiche of corporate properties. 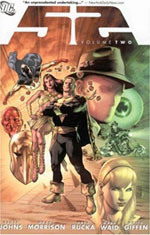 Adding to the pleasures of the 52 collections are the notes that follow each weekly chapter, in which different creators reminisce about the challenges and ideas that arose while the book was being composed, and which occasionally include script excerpts or original artwork (useful for comparison to finished pages). Similar to the commentary on a DVD, these behind-the-scenes insights will thrill fans, but offer all readers an opportunity to learn how such a mammoth collaboration was pulled off, to ponder the text from the creators’ angle, and to listen in as they work out problems and achieve goals—which in this case means acknowledging each other’s solutions as well as their own. (Morrison, especially, is often singled out for the kind of hagiographic praise reserved for the true geniuses of the medium, as when Waid comments that “Grantiac… generates more new ideas in the time it takes to sneeze than most of us will have in a year.”)

52, in short, may partake of the current drive for big events in comics, but it’s as intricate, fun, and even occasionally as personal as Kirby’s Fourth World saga—which is saying a lot. Certain paradigms may have shifted in comics culture, but what hasn’t changed between then and now is the desire to tell a story that, though fabulist in nature, remains rooted in the most basic of human needs, and to make it great. In both recovered texts and those from the present day, it’s a pleasure to see that standard met.