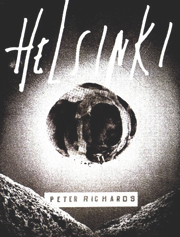 We were never to discuss it or perceive it
why even to mention it in a dream meant
death by expulsion but now I must speak
it I have too much inventory as they say
—Peter Richards, Helsinki

Half of what I say is meaningless.
—The Beatles, “Julia”

A decade has passed since Tomaž Šalamun declared “it is better to be a new young god in American poetry than to be President of the United States” in his introduction to Peter Richards’s first full-length collection, Oubliette—and indeed the past ten years of the presidency have rendered this statement understandable at a visceral level. That the internationally renowned Slovenian poet connected so intensely with the “religious magma” of a young American poet was also rather prescient, for Richards’s poetry resonates so strikingly with his European contemporaries, many of them unavailable in English at the time.

The interlocking poems that make up Helsinki, for example, would be right at home in the 2008 anthology New European Poets. The sequential and surreal aspects of the collection call to mind the work of Vénus Khoury-Ghata, each poem adding nebulous yet elemental detail to the world imagined by the whole. In 2011, Šalamun’s compatriot Aleš Šteger reads Richards’s third full-length collection as a “sinking into Hell,” which nicely underscores the incantatory power of the book’s title. Helsinki is indeed a dark prayer located inside the artificial paradise of language and the hell of words. This verse universe beckons close reading on the tactile, syntactical level.

Whereas Baudelaire used hair and perfume to escape the putrefying and splenetic urban landscape, Richards works his way through an intricate metaphysical snarl, where “combs are just normal people in the atmosphere / raking the air for air cannot say it gentle enough”. Poems often begin with the observatory tone of a Dante on drugs:

Synesthesia and metamorphosis abound, as they should, for everything—including the most basic sensory data, and all words—contains the means for its own unmaking. With the poet, the reader intones: “yes I accept it I have no former state.”

Overall, Helsinki presents the reader with a labyrinthine otherworld of dazzling ciphers that is as Dantesque as it is Borgesian. Eschewing titles and punctuation (aside from apostrophes), the book ritually offers up encrypted phonemes and keywords for the reader to unlock: white dot, hair, Julia, herrick, banner. Parts of words are dropped in favor of “lindrical” and “travagant” utterances, and parts of speech have a concerted Mad Libs-like quality to them. Combined with reckless enjambment, the world of the poem is persistently unstable and rich with shadowy epiphany:

The antiquated or stilted language poets “shouldn’t use,” as well as subjects like virgins and breasts, seems entirely appropriate here. Pop culture references become elevated, lines suddenly imbued with liturgical potential: “I’m in the shallows with a sunlit can of Fanta tall”, and “we drank Makers and one night they really did weave”. The discourses of religion and science intermingle at a gothic molecular level, while military and erotic registers fight to the death over a few lines—and for what? The cumulative effect of such alchemy is the precise antithesis of hallucination. Helsinki is, instead, an awful and deep-threaded vision of the cosmos.

There is much to be said for nurturing and churning over “too much inventory” for too long. Coming nine years after Nude Siren, Richards’s second full-length collection, Helsinki is well worth the wait and the time. The past decade has taught us that being a new young god in American poetry is an utterly frivolous enterprise. Better to sink into hell and remake the world.