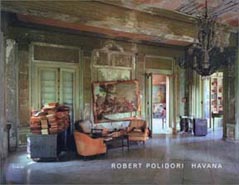 Many viewers will have seen Robert Polidori's photographs in magazines such as The New Yorker, and may remember them as sharp illustrations of urban landscapes, artistic documents of the incontrovertibly real. Those fortunate enough to have seen his work in a gallery setting may have felt—given the photographs' large scale and pristine detail—that they could walk right into the pictures as if they were a sort of virtual reality. Both views are encouraged in the happy medium of Havana, the award-winning photographer's first book.

The power of photography to show us "reality" will be much on the viewer's mind as they regard these images of the one of the world's most mythic cities. As Eduardo Luis Rodriguez puts it in his essay "The Other Havana," Polidori has captured "the citadel in ruins," a once-opulent capitol that chose, through revolution, another path. In Havana, ornate chandeliers coexist with rotting plaster, laundry is strung in former ballrooms, and dust settles over everything. Dali's famous painting of clocks melting on the landscape may be called "The Persistence of Memory" but here is a real (rather than surreal) depiction of the theme—the old Habanero landscape melting onto/over/beneath the new, with each arguing for a foothold in reality. Rather than the erasure of time past—the prevalent (and practically required) mode of Western capitalism—we see here the mere stoppage of time, which paradoxically allows it to persist.

A land that time didn't forget is likely a photographer's dream, and Polidori has made the most of it, capturing the aura of decay on film. Even more delightfully, his insight seems inextricably wedded to his technique. While the wide-angle exterior shots, most of building facades, are impressive, the interior shots, which eerily convey the totality of the seen space are truly awe-inspiring. In his expansive take on the frontal shot, Polidori lays bare these rooms to the viewer's peripheral (not to mention microscopic and x-ray) vision. Bathed in an impossible light, surely not the fluorescent light that is practically a character in so many of these pictures, each contradictory detail—the electric fan in a dusty room, the gleaming bicycle next to molding books—is literally exposed. But the impossible seems part of daily life in this time-ridden place. In one arresting image, an abandoned car—rusted, nearly stripped, missing a front tire–sits in line with newer vehicles, seemingly ready to pull away.

In Havana, apparently, to see all of a place is to see all of its time, and Polidori has done just that. Smoothly edited by Elizabeth Culbert, Havana tours us through the city with eyes wide open, ready to take it all in.