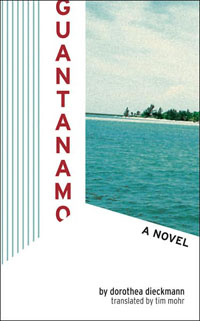 Guantanamo chronicles the transformation of Rashid, a German who, while vacationing in South Asia, is arrested and shipped to America’s most famous detention facility. In this alien world of outdoor cages and grueling, imposed rhythms, subjected to the excruciating pain of torture and the agony of monotonous, exposed captivity, Rashid loses his old sense of self and becomes someone new.

This surrender begins on the biological level, as hunger turns to “generic desire for generic slop,” “a dull feeling in his brain and on his tongue” that prompts him to wait for and savor tasteless meals. Later, confusion and fear give way to Rashid telling his captors what they want to hear, even feeling guilty that he can’t offer more details on his jihad, a word he’d never used before being brought to this place. Likewise, from originally thinking of the Koran as a collection of “fairy tales” Rashid finds that, when locked up in a prison camp with nothing else to read, the words of the scripture take on mystical resonance, inflecting his experience and worming their way into his dreams.

By the end of the novel, however, the hallucinatory dislocation is gone, and Rashid is surreally at home in his constriction, living now in a walled cell, anticipating small favors and treats—a twinkie, a Kit Kat bar. Acculturated to his hellish existence, Rashid dreams of paradise as “Security level four. A shower every day. Videogames.” The longing for distraction and comfort replaces the idea of freedom. Plans for suicide are dismissed with the arrival of a Happy Meal and the “feeling of reassurance and familiarity” it brings. Rashid may vomit after gorging himself, but the “unmistakable sensation of having been uncomfortably full” offers something like satisfaction.

Dorothea Dieckmann is a master of description and the psychology of confusion, and as the panicked dependency of the abused on his abusers takes root and grows, she shows herself to be an heiress to Robbe-Grillet and Kafka. With the disquieting, warped ending of her book she surpasses these teachers and gives us something more contemporary and indicting: in the next cell over, Jamal, who has extracted a miniature Barbie doll from his Happy Meal and named it after his wife back in Manchester, sings saccharine snippets of pop song lyrics, crooning “This is where I long to be… la isla bonita.”

There is a second, more subtle narrative of transformation within Dieckmann’s book—the story of America’s decline, of the risk of the nation and culture collapsing from within due to the complacency of citizens who fail to protest (or even pay attention) to the lawlessness and immorality of their government. For a German, the grave weight of such responsibility bears special resonance, but for all readers, this disturbing tale functions as an urgent parable for our times.