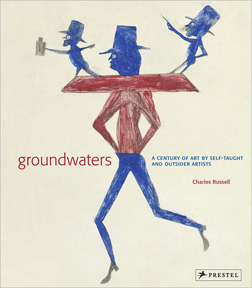 All experience lodges within us—states of ecstasy and despair, what we absorb with our senses, and the bombardment of delight and conflict imposed on us by our cultural milieu. Our psyches mysteriously absorb this barrage of stimulus, and then combine the effects and impacts with genetic matter to inform who we are. When filtered through a fertile imagination, this process can make sparks, causing a spontaneous combustion of passionate creation that emerges through the hands, spilling onto canvas, walls, paper, wood, bone, metal, rags, skin, rock, glass, clay, or numerous other materials. The outpouring can alter the creator’s consciousness and offer the rest of us a gift capable of shifting the way we see the world.

At the heart of scholar Charles Russell’s new book, Groundwaters, is the egalitarian premise that all art bubbles up from a deep well and “flows toward the stream in many rivulets, many expressive impulses run in many creative paths into the great stream of art.” Rather than dwelling on the inability of the mainstream art world to shift its rigid ideas about what constitutes art, Russell focuses on how art arises from a multiplicity of sources and influences. In the process, he effectively expands and illuminates the evolving field of outsider art.

Russell presents a clear history of how the field developed, beginning with two psychiatrists, Hans Prinzhorn and Walter Morgenthaler, whose fascination with the art made by their institutionalized patients inspired each of them to write seminal books about this radically new art, although neither had a name for it. They both drew comparisons between the extraordinary work of their patients and the creative currents running through Europe in the early part of the 20th century, a time of intense interest in both the primitive and the workings of the subconscious.

This sort of unusual art received its first label when artist and ardent art collector Jean Dubuffet called the wondrous, original creations made by the mentally ill and outcasts art brut, or raw art. Dubuffet championed art brut by amassing a vast collection and writing extensively about its importance as “an expression of an antisocial or asocial spirit that belied the false legitimacy of culturally defined art.” Russell credits Dubuffet for helping promote art made by people on the margins of society through his initiation of international discourse about the interplay between such makers of art and the culture from which they are estranged.

On the other side of the Atlantic, however, the spirit of individualism was well established and novel approaches to art were “seen as truly representative of a culture of nonconformists.” Russell contrasts the rivulets of creativity flowing here against artistic currents coursing through Europe, pointing out that America was young and without the long history of “rigid traditions against which to struggle” that European artists possessed. These fundamental differences generated different types of discussions about this art and its relationship to the broader culture.

In Europe, the issue transcended aesthetics. Critics and collectors wondered if these radically new forms of expression generated by the mentally ill and people living on the fringes were “an act of renewal or . . . a form of social collapse.” Self-taught artists in the United States, however, were less pathologized. Instead, they were viewed as the embodiment of the spirit of independence, their work lauded as valid and vital expressions of the common man. This art “symbolized and contributed to cultural identity, not opposition to it,” but that is not to say that folk or naïve art was welcome within the established art world with its pedigrees and rigid traditions. 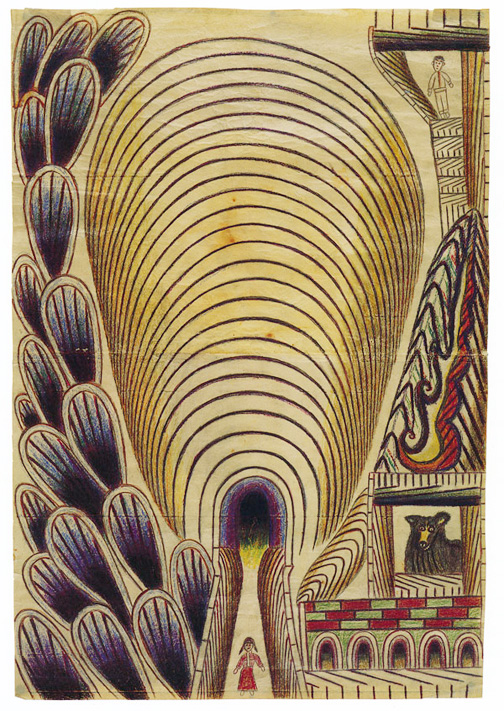 art by Martín Ramírez from Groundwaters: Untitled (Tunnel with Man, Woman, and Dog), 1954

After Russell clarifies and summarizes the numerous problems surrounding the field, he proves a marvelous, erudite guide who ushers us past abstract arguments into an otherworldly dimension of undeniable beauty. Genuine innovators like Adolf Wölfi, Martín Ramírez, Madge Gil, Nek Chand, and Henry Darger are regaled and redeemed in the broad cultural context Russell provides. Whatever you call this art—outsider, self-taught, folk, art brut, art singulair—it has the capacity to challenge and provoke the viewer with its beautiful and often disturbing content.

Russell has chosen a variety of artists from around the world and arranged them historically. His insightful analysis of formal and aesthetic concerns of the work of an individual artist at the start of each chapter enriches and enhances the accompanying high quality reproductions. He deftly weaves events and changes occurring within the culture during the time the artist was alive, revealing conditions that influenced, or may have influenced, each artist. Some influences are open to speculation due to the level of isolation each artist experienced. For instance, Wolfi and Ramírez were institutionalized for much of their lives, which makes it difficult to identify exactly what nourished their imaginations.

Some of the dissent within the field is entwined with lingering romantic ideals of the artist as an acutely sensitive being who, out of necessity, chooses isolation in an effort to remain unscathed by external influences. Before mass media and pop culture infiltrated our world, many people were cut off from creative expression, but not necessarily by choice—they were often relegated to the margins by virtue of race, gender, geography, or socioeconomic or mental status. Many simply felt compelled to make stuff with what they had on hand, and were not specifically intent on making art.

While conveying how each artist developed and articulated his or her own vision, Russell seamlessly expands the evolving theories surrounding outsider and self-taught art. By narrowing his focus to a single exemplary artist before including other lesser-known artists working in similar veins as well as contemporaneous mainstream artists, he deepens the discussion, offering clear proof that this work is art and stands alone as art, regardless of how strange it might appear to the viewer. Once he establishes this undeniable truth, only then does he veer into the territory of biography, which has often been given more weight than necessary when critics evaluate or explain imagery that defies convention. While this work seldom shows the restraint, clean edges, or self-consciousness of mainstream art, it nonetheless exhibits masterly control and imaginative use of unusual materials.

Groundwaters is an important book about an important tributary of the art world. Even today, self taught artists play a precarious role in a culture uncertain of what to make of their art, beyond its ability to permit entrance into utterly captivating alternate realties.