Black art in North America has long been robustly diverse and extremely lively. There is no chance of adequately surveying the many artists at work across its broad landscape. The following consideration, then, of three recent publications concerning three historically distinctive Black artists, offers but a snapshot of the abiding vitality and interconnections across artistic discipline that keep Black art abundant and enthralling. 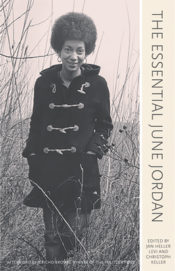 While appreciation for the work of poet June Jordan (1936-2002) has never ceased, The Essential June Jordan provides renewed testament to the continuing power and relevance of her words to spark fierce defiance and offer abiding insight into complex issues of race, class, and gender. Bassist, composer, and bandleader William Parker (born 1952) has been active in the international improvisation and experimental jazz scene for decades, and Cisco Bradley’s new biography, Universal Tonality, encourages landmark recognition of his tremendous contributions as well as consideration of his spiritually rich personal life. The Jean-Michel Basquiat Reader, impressively edited by Jordana Moore Saggesse, represents an unprecedented gathering of primary sources documenting the conflicting perspectives surrounding the voluminous work and too-short life of visual artist Basquiat (1960-1988).

In this July’s issue of the international music magazine Wire, pianist Matthew Shipp offers a short reflection on New York City in the early 1980s (when he first arrived on the music scene). With his abstinence from heroin use, William Parker was a rare presence among older jazz musicians. Although he never held it against any player so long as it did not interfere with their playing, his own spiritual commitment to “the tone world” always kept him firmly away from drug use. In a nearly throwaway yet enlightening aside, Shipp also mentions spending his earliest years in the city away from the jazz scene and frequenting instead the burgeoning DJ-centered clubs of the era, where he shared the dance floor with none other than Basquiat.

Anecdotal as it may be, Shipp’s commentary demonstrates how closely knit varying art worlds are, especially in a locale like New York. Considering the profusion of references to Black jazz musicians scattered throughout Basquiat’s work, the fact that he and Shipp were frequenting the same clubs just a few years before Shipp shared stages with Parker comes as more of a validation of mutual influence across artistic disciplines than a surprise. In a darker commonality, Basquiat’s long-term girlfriend Suzanne Mallouk recalls how in the NYC club and art scene of the era, “most of us were heroin addicts and drug addicts that stayed up all night and slept all day.” Such behavior led to Basquiat’s tragically early death by way of overabundant drug use; heroin was also the suspected cause of William Parker’s brother Thomas’s death in 1978.

In another twist of perhaps casual yet nevertheless meaningful interdisciplinary connection between these artists, biographer Bradley at one point mentions Parker’s “Poem for June Jordan,” a tune written “for the ‘unsung writer’ who had always had an influence on Parker”; as he wrote in liner notes, “her words were always insightful and very honest and again, filled with compassion.” Just as Basquiat drew inspiration from and paid tribute to jazz musicians—for instance, his works Discography, 1983 and Discography (Two), 1983 list names of well-known figures such as Miles Davis, Charlie Parker, Dizzy Gillespie, and Max Roach, alongside the less famous Sadik Hakim, Curley Russell, John Lewis, and Nelson Boyd—Parker profoundly identified with how Jordan wove language together that reflected both the beauty and tragedy of Black life. The draw he feels towards her insight, honesty, and compassion is easily apparent in lines from any number of her poems: 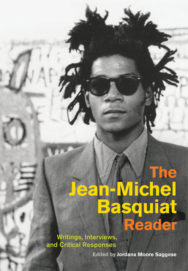 Heralding the power of Black cultural lineage is a constant across the work of these artists, even as it (of necessity) is accompanied by bitter awareness of how maligned the magnificent and vast contributions of so many have been at the hands of white America. In The Jean-Michel Basquiat Reader, Mallouk testifies how Basquiat continually confronted the matter of his Blackness: “He would play with these Black stereotypes and present himself in the form of threatening Black stereotypes to fuck with people. To be subversive. To make people stare at their own racism in the face.” Franklin Sirmans, meanwhile, describes critics playing up Basquiat’s skin color as a sign of his primitiveness while downplaying any possibility of his background as being culturally rich, “as if to say, ‘never mind that properly French name, this is a Black kid!’” Sirmans quite accurately labels it as a “misguided dependence on stereotype and cultural mythology.”

As Sirmans avows, “the hand was definitely stacked against Basquiat, and he knew it.” Artist and pal of Basquiat Keith Haring describes how “there was very little criticism that actually talked of the works themselves. Rather, the talk was about the circumstances surrounding the success of the work.” In fact, “people were more interested in the phenomena than the art itself.” In a piece that is little more than a litany of derogatory attacks, critic Robert Hughes provides ample evidence of how disparaging the mind-set among critics was, with pronouncements such as “the very nature of Basquiat’s success forced him to repeat himself without a chance of development” and “these were the 1980s. And so he became a star.” Hughes even judges some groundbreaking Basquiat work as “worthless ‘collaborative’ paintings with Warhol” and declares, “His ‘importance’ was merely that of a symptom.”

This handling of Basquiat comes as no surprise to any Black artist. Jordan’s poetry, for instance, encapsulates the ridiculous and horrific reality of being Black in the U.S.A. Like Basquiat, she knows it is up to her to call out and challenge all figures of authority imposing such views, as she does in the 1980 work “Poem about My Rights”:

Although Jordan is the “poet proper” among this gathering, Parker and Basquiat each prove themselves avidly apt at utilizing language as well. Parker composes his own poems, often including them along with, or in place of, liner notes:

And Haring sees his friend Basquiat as “the supreme poet; every gesture symbolic, every action an event,” and comments, “he used words like paint.”

All three of these artists were, to varying extents, lifelong autodidactic learners. Jordan, a Barnard drop-out, was by far the most “officially” educated; both Basquiat and Parker, for different reasons, completed only high school. They never stopped pursuing any knowledge or interest, however, continually punctuating their works with new factual information turned up by way of curiosity and dogged effort. As Jordan serenades in “Something Like A Sonnet for Phyllis Miracle Wheatley”: “Chosen by whimsy but born to surprise / They taught you to read but you learned how to write.” Art collector Bruno Bischofberger notes that Basquiat “was constantly reading something,” and art historian Robert Farris Thompson relates how in an interview, “he told me, ‘I get my facts from books,’” going on to describe his impression of how Basquiat “never ever passively copies; his is always readapting it at the very least for rhythmic phrasing on the page.” Thompson also draws an intriguing comparison with the writer Walter Benjamin, quoting scholar Peter Demetz’s introduction to Benjamin’s Reflections:

Jean-Michel, like Walter Benjamin before him, has the ability to work with “texts” that for most of us would not constitute texts at all. “The ancients may have been ‘reading’ the torn guts of animals, starry skies, dances, runes, and hieroglyphics, and Benjamin, in an age without magic, continues to ‘read’ things, cities, and social institutions as if they were sacred texts.” 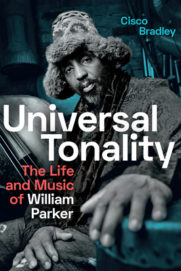 Parker’s work, too, strongly “reads” things—the city’s noise and abundance, weather, natural land formations such as mountains and lakes and rivers—as “texts” that few indeed would likely recognize “constitute texts at all.” Given the largely improvisational nature of his music and the free jazz background from which it arises, some listeners may not even recognize it as “music,” for that matter. Yet Parker is one of the foremost practitioners of what is arguably the greatest Black-led American artistic tradition, i.e. jazz, and Universal Tonality casts him in the full light his work deserves. With Parker’s full cooperation, Bradley weaves as complete a tracing of Parker’s ancestral roots as possible, from West Africa to his grandparents in South Carolina and his early years growing up in the Bronx, as well as revealing the humble circumstances Parker’s own family grew in starting in 1988.

Even though Parker has recorded dozens of pieces (Bradley includes a complete discography as an appendix) and performed hundreds if not thousands of shows around the world, “he still has many hundreds of compositions that he has never had the opportunity to record or even perform.” This speaks, in part, to the fact that there simply has not been enough funding to preserve and support all the work Black artists have dedicated their lives to producing. Two decades on since her death, The Essential June Jordan signals that her place in the world of poetry as an acknowledged wonder is only now slowly solidifying. Editors Jan Heller Levi and Christoph Keller have avoided chronological ordering, allowing sympathetic themes between poems to guide their gathering. The inclusion of four poems not previously published along with an opening gallery of photographs make for a true celebratory tribute. And if Basquiat’s ultimate fate in the annals of art history remains unknown, it is Saggesse’s Reader to which the future will turn for guidance as she expertly maps out the historical territory.

In “Breath and Precarity,” presented as the inaugural Robert Creeley Lecture in Poetry and Poetics at SUNY Buffalo, poet Nathaniel Mackey asserted, “Blackness is the sign and the symbol of risk, preeminently at risk in a scapegoating, sacrificial world order for which black is the color of precarity itself.” Nowadays Mackey’s sense of “precarity” is ever too easily—even if finally—recognizable. And thirty years ago, Jordan was asking questions that remain far too relevant in our own time:

In its unswerving commitment to bespeaking shared experience of injustice without capitulation to oppressive cultural forces, Black art presents an endless song of renewal. In Basquiat’s deep, expressive use of and reply to Black characterizations and symbols, there lies clear indication of his keen awareness. Parker’s life and music continue to shine forth, indicating a path forward. And in Jordan’s poetry, the beauty and importance of language is most keenly felt. These three are all landmarks in 20th century art, and the publication of books that understand this is long overdue.