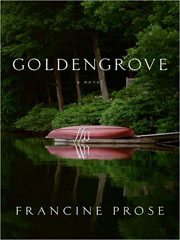 Instead of unctuous stereotypic babble—the contrived kind that smacks so clearly of an adult author emulating a teen—Francine Prose’s latest book presents a classic young protagonist whose utterly believable point of view unfurls seamlessly. Destined to take its place among the great novels of adolescence, Goldengrove tells of the summer when thirteen-year-old Nico suddenly inherits the role of “One Remaining Child,” cast by mindless fate when her older sister Margaret abruptly dies, and distracted family members navigate the trampled labyrinth of grief.

Any death, particularly that of a young person, plunges survivors into despair; crucial assumptions and expectations—especially that one’s family will live happily ever after—crumble, toppling everything. Margaret’s parents are too shattered to reach beyond their own salvation to shore up their younger daughter’s. Stunned, in total shock, Nico is on her own, with no idea how, or why, to go forward without Margaret:

None of us knew. No one knew. That was what everyone kept saying. First we didn’t know what happened, then we didn’t know how it happened, and then we still couldn’t understand why, why Margaret, why our family, though it wasn’t like us to say, “Why us?” What did it mean to be like us? What did us mean without Margaret?

As Nico struggles for balance, she notes: "Every empty second was an invitation to gaze into the abyss and think how sweet it would feel to jump." Avoiding everything connected with Margaret seems the only way to inch forward with the least amount of pain: “Aaron’s van was way high on the list of Margaret-related things. Everything else—music, films, the lake—slipped down a rung, like guests at a table shifting to make room for a late arrival.” But Aaron, Margaret’s boyfriend, becomes for Nico the only person she can bear to be around. Her parents don’t much care for him, so Nico meets Aaron the way Margaret used to: secretly. “I did what anyone my age would have done. I invented a barbecue with old friends . . . At first I was relieved that [my parents] trusted me, and then insulted that they still thought of me as a truthful child instead of a scheming, secretive teen.”

Initially there is nothing sexual or romantic about the relationship. Nico has had crushes before but “Aaron treated me like a person, unlike the boys in my school, to whom I was a window through which they kept looking for a hotter girl with bigger breasts.” She feels that she can be herself with Aaron, or at least the version of herself that most resembles Margaret. Aaron, for his part, wants Nico to wear Margaret’s clothes and her special scent, so he can do things with her that he used to do with Margaret. “Part of me thought it was creepy . . . And part of me truly loved it,” says Nico, but eventually the creepiness supersedes.

Once again, Francine Prose exposes a universal situation uniquely, this time the struggles of a family and their friends trying to survive the unacceptable. In inimitable fashion, she focuses on the path chosen by the surviving sister who learns, as survivor siblings must, how no one can ever fill the void left by the dead.