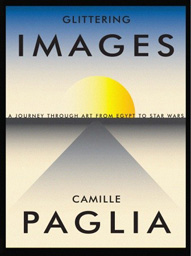 Connoisseurs of controversy will remember the sentence that made Camille Paglia infamous: “If civilization had been left in female hands, we would still be living in grass huts.” This judgment sums up the theory of human nature informing Paglia’s first book,Sexual Personae: Art and Decadence from Nefertiti to Emily Dickinson (1990). There she argued that human history oscillates violently between the clashing feminine earth-and-sea vortex of nature and the skyward masculine principles of order, reason, and artifice. While she pursued this thesis across a vast array of literary and visual texts and through almost 600 closely printed pages, Paglia nevertheless won fame not for her scholarship but for her argument’s calculated violation of several ideological taboos in the academic humanities. She accordingly became a minor celebrity in the 1990s, carefully and at times ludicrously nurturing a reputation as a reactionary-rebel against the leftist establishment. After 9/11, however, Paglia’s notoriety waned as the culture wars over sex and gender receded. The long-promised second volume of Sexual Personae never arrived. A bold career seemed to be fading into irrelevance.

But irrelevance proved to have its advantages. As one of Paglia’s heroes, William Blake, put it: “To generalize is to be an idiot.” Freedom from celebrity has muted Paglia’s generalizing tendency. The two books she published in the last decade, Break, Blow, Burn (2005) andGlittering Images (2012), are primers for the common reader on poetry and visual art, respectively. They do not brandish a unified theory of culture as Sexual Personae does, but are rather collections of appreciations—that ever-necessary, never-fashionable critical genre mastered by another of Paglia’s heroes, the late-Victorian aesthete Walter Pater. Pater cautioned his readers to take aesthetic experience on its own terms rather than “acquiescing in a facile orthodoxy, of Comte, or of Hegel, or of our own.” Paglia has always had difficulty with that last part, exhibiting a zeal to force all works into her dubious sexual paradigm.

Glittering Images escapes this fate by avoiding facile contrarianism. Its polemical introduction on the problems besetting art education today is moderate and sensible. Paglia takes a classically liberal plague-on-both-your-houses stand against the religious right and the P.C. left, both of whom she persuasively accuses of disparaging beauty, fearing sexuality, oversimplifying spirituality, and using art only to promote their political agendas. She calls for art education focused on objective historical knowledge rather than on self-expression, and she argues that training in the artistic heritage is more necessary than ever, given the complicated media environment we now must negotiate. “The format of the book is based on Catholic breviaries of devotional images,” she tells us, inviting the reader to resist the “dense whirl of relativism and synchronicity” that is the modern experience of constant connectivity.

Glittering Images examines twenty-nine works of art, starting with the wall of Nefertari’s tomb and ending with Star Wars: Revenge of the Sith. The selection principle is evidently personal, not to say arbitrary, as undisputed classics from Laocoön and His Sons to Warhol’s Marilyn Diptych are placed alongside more surprising choices, such as an early Cycladic figurine, Bronzino’s Portrait of Andrea Doria as Neptune, French Rococo interior design, and Tamara de Lempicka’s Portrait of Dr. Bouchard. The accompanying essays begin like encyclopedia entries: they provide information about the artist and his or her milieu, the work’s media and genre, and whatever other entertaining facts Paglia deems relevant—witness, for instance, a pleasantly bizarre excursus on ships named for Andrea Doria that interrupts the Bronzino chapter. Her prose is, as ever, a model of forceful, unfussy clarity that only rarely descends to lazy vulgarity (as when, alas, “Monet found his groove and became a workaholic”).

The rhapsodies that conclude each chapter of Glittering Images offer the book’s deepest pleasures. The theoretical hubris of Paglia’s early criticism concealed her extraordinary gift for close reading. She can with unerring perspicuity spot the keystone of a work, and no one is better at capturing in a quick verbal sketch the total effect of a text or image. This is why so many readers, Paglia’s opinions about gender and politics notwithstanding, have kept Sexual Personae close at hand for more than a decade. It is as a set of aesthetic readings that Glittering Images, too, succeeds. Her critical method could be called interpretation via inspired description, an illuminated ekphrasis. Consider her encomium to Jackson Pollock’s Green Silver:

It’s as if we are peering into physical reality at its elemental level, where matter turns into humming energy. Abstraction may have liberated Pollock from the burden of personality. His drip paintings have panoramic reach. They are a heaving primal landscape into which humans have not been born, and yet they project the infinite vistas of warp-speed time travel, the new frontier of the space age.

Paglia’s intuitive but persuasive leaps from sense to significance require a rare combination of talent and training. Such seemingly effortless insights are worth more than reactive thesis-mongering, and it is to our benefit that Paglia finally seems to have realized this.

But Paglia always introduces some controversy, and Glittering Images predictably has one sensationalist argument to advance: that George Lucas is the greatest artist of our time. This is extremely unlikely. She makes a spirited case for it, though, emphasizing Lucas’s ambitiously holistic historical and spiritual vision, his technological innovations, and his gift for generating imagery of nigh-universal interest. Scanting his obvious limitations, she portrays Lucas as a neo-Baroque visionary workshop master, a view for which her earlier discussion of Bernini’s effects-laden Vatican spectacle, the Chair of St. Peter, does much to prepare the reader. An unfailing test of good criticism is whether or not it inspires you to view or review the criticized work, and Paglia certainly made me want to watch Return of the Sith.

I can imagine no better gift for a bright teenager than Glittering Images, and I mean that as the highest praise. Paglia, by all accounts a devoted teacher of undergraduates, understands that someone has to transmit the basic knowledge and skills of art appreciation to the young. Some may deride her as a reactionary elitist, but Paglia does more than most self-styled populists to usher the common reader into the presence of greatness. “The only road to freedom is self-education in art,” she declares. And a critic who encourages and enables that education is a servant of freedom.