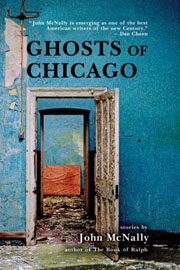 “Writing is a socially acceptable form of schizophrenia,” E. L. Doctorow once said. John McNally takes full advantage of this acceptability in his book of short stories Ghosts of Chicago. His characters, some purely fictional and others based on late, great Chicagoans such as John Belushi and Gene Siskel, are all moderately to severely unstable. Recurring motifs include men obsessed with women obsessed with other men (who are usually creepy and dysfunctional), mental instability, and drug dependency. Whether rendered in first, second, or third person narration, each of McNally’s voices is clear and evocative, as are the characters. In a few short pages, it becomes evident what haunts each character, even when they themselves aren’t entirely sure.

One of McNally’s most compelling tales is “The Goose,” in which a television show about a goose that thinks it is president of the United States becomes a man’s whole world. The story portrays Chicago television personality Frazier Thomas, but is narrated in the second person; usually limited to guide books and interactive fiction, this device allows the reader to experience how life might have been for a pop-culture figure whom many grew up watching. “The goose waits each morning for the arm that gives him body, the hand that fills his head. Then he waits for you, his trusty compatriot.” Thomas becomes paranoid that the goose is always watching him, and he grows increasingly ill at ease in front of the camera. The directive prose is distant, yet able to convey how sad and adrift Thomas may have felt. “Here you are, a fifty-something-year-old man, surrounded by puppets, and you think, This is my life, it’s not so bad.”

In the more lighthearted “Creature Features,” McNally becomes eight-year-old Timmy, who is obsessed with monsters. When his mother breaks the “horrifying news” that she is pregnant, Timmy doesn’t seem to mind. In reality, the announcement doesn’t even break into his consciousness:

The only things I cared about were monsters. Movie monsters, to be precise. I wouldn’t talk to anyone unless they had something to say about monsters. If the word monster didn’t come up within the first few seconds of a conversation, I quit listening. Monsters was the only acceptable topic—the only topic, in fact, worthy of my undivided attention.

This fact is explored humorously as the pregnancy progresses. Each time the baby is mentioned, Timmy acts oblivious. “What baby?” he replies offhandedly when told he will have to share a room, turning back to his monster magazine. McNally is wholly believable as a preoccupied prepubescent boy. Timmy’s thoughts are simple and curious and his stubborn refusal to acknowledge anything non-monster is very telling of his age. The night his sister is delivered, Timmy connects the birth to the creation of the Frankenstein monster. Only after making this analogy is he able to accept the new addition to his family, shouting out his window into a lightning storm, “It’s alive! It’s alive!”

McNally’s seemingly mild-mannered yet unreliable protagonists prove intriguing as each deals with his or her own metaphorical monsters. Far more universal than its title might suggest, Ghosts of Chicago is a rollicking tour through the psyches of our modern world.