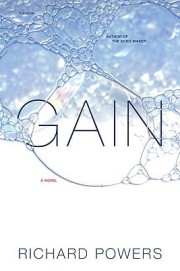 “The business of America is business," said Calvin Coolidge in 1925, which is even more ruthlessly true today, when everything from the arts to health care is measured if not motivated by financial profit. To understand our money-driven culture on must understand economics, a daunting and complex subject that scares off most readers and novelists, but not our best; William Gaddis in JR and Thomas Pynchon in Gravity's Rainbow went to prodigious lengths to expose the skeletons in capitalism's closet, and now Richard Powers joins their exalted company with a masterful novel named after the strongest force in millennial America: Gain.

In alternating chapters, Powers tells two stories: the 170-year history of Clare, Incorporated (think Proctor & Gamble or DuPont) from its simple beginnings as a small, family concern to its present status as a multinational corporation, and a contemporary account of the last year in the life of Laura Bodey, a real-estate broker living in Lacewood, Illinois, the Midwest headquarters of Clare. Parallel to Clare's progress from soap manufacturer to global giant is Laura's discovery and battle against ovarian cancer, which grows with the same blind urgency as the corporation. In between the alternating chapters are brief examples of Clare's PR materials over the years: ads, signs, press releases, and so forth, reminiscent of Dos Passos's U.S.A.The two stories begin to dovetail when it's suggested Laura's cancer is the result of nearby Clare's manufacturing process.

Powers is a masterful stylist, and the alternating stories tailor the language to the times. The language is grand and fulsome in the historical sections on Clare: bold personifications, windy rhetoric, daring, even reckless metaphors ("Rail steadied the farmer's year like a hand laid upon the turbulent heel of heaven"), mirroring the reckless roller coaster ride of American commerce in the nineteenth century. The style in the contemporary sections is comparatively sedate, the sentences shorter, though still quite imagistic, like the late great Stanley Elkin.

Powers is also a masterful researcher. For each of his previous novels he investigated a forbidding subject—genetics in The Gold Bug Variations, cognitive neurology in Galatea 2.2—and
made an exciting, intellectual adventure out of it. He does so again in Gain, both with economy (chemical manufacturing, the implications of incorporation, labor relations, stocks, etc.) and with cancer. Laura's illness and chemotherapy treatments are related in such excruciating detail that I'd swear Powers went through it himself.

Unlike Pynchon, Powers doesn't see evil or occult forces behind the growth of capitalism, and unlike Gaddis he doesn't show much outrage over the stupidity and greed that can pervert it. Instead, there's a curiously detached tone to the novel., conveyed in its somewhat neutral-sounding title. Nevertheless, Gain is a brilliant, moving novel, and an enlightening account of the price our country has paid for its headlong pursuit of the almighty dollar.