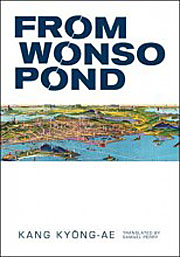 From Wǒnso Pond is a novel that tears the veil off a society struggling to transition from a traditional, agricultural way of life to a modern industrial economy. Kang Kyǒng-ae delivers a portrait of the ordinary individuals whose lives are torn apart in the machinery of this transition, which in many ways continues in contemporary South Korea. Here she patiently describes one character’s moment-by-moment attempt to earn a living as a day laborer:

The best workers managed to stack up fifteen or sixteen [bricks]. They put a piece of burlap over their backs, then cut off another strip of burlap, attached it to the ends of the wire, and strapped the bricks onto themselves before standing up . . . And when he looked down at his hands, he saw that they were scraped and bleeding . . . Only then did he notice, to his horror, that each brick had tiny little spines that were stabbing him.

Kang Kyǒng-ae was writing and publishing in the 1930s and ’40s, a time when Japan held a repressive and brutal colonial rule over the Korean peninsula. This novel, her second, gives the reader the daily lives of her characters—their external challenges and the resulting internal turmoil. The novel is structured chronologically and chapters switch perspectives between a handful of main characters, each representing various elements of Korean civilian society: Sǒnbi, a hard-working orphaned girl from the country who must work for a middle-class family who exploits her, and who eventually moves to the city and begins work at a large spinning mill as part of an all-female indentured labor force; Ch’ǒtchae, a young man from the same village whose name ironically means “first,” who goes to the city to become a day laborer; and Sinch’ǒl, a college student who is involved with the bourgeois daughter of S ǒnbi’s employee, and who eventually becomes a “fallen intellectual” and joins the labor movement at the cost of losing his family, his position in society, and his opportunity to have a wife and family.

Government officials and politicians are noticeably absent from the narrative. Kang avoids authorial judgments of politics and policies, letting her characters’ inner thoughts show the dilemmas that result from the abuses of power and the inequities of the distribution of the means of production:

Ch’ǒtchae had lost tenant rights to his fields. The magistrate said that the township office was supposed to help all the farmers enjoy a better life . . . Does that mean I’m no longer one of the farmers? he wondered. I mean, Tǒkho is mayor of the township, and yet isn’t he the one who took away my land? And all because I broke some so-called law by smashing a wagon . . . the law . . . the law . . . Hell, I’ll probably be breaking the law if I don’t do what the magistrate said today either. . . . The law . . . The more Ch’ǒtchae thought about it, the more his doubts about it seemed to creep under his skin. . . . Ch’ǒtchae still tried hard to abide by this ‘sacred and unbreakable thing called the law, but for some reason as the days went by, he’d become increasingly caught up in it.

Kang was born in 1906, one year after Japan made Korea a protectorate, followed by official annexation in 1910. She died six years before the official beginning of the Korean War. Her novel was serialized in 120 episodes in the Tonga ilbo (East Asia Daily) newspaper, still in operation today, and wasn’t published in book form until 1949 in North Korea, and it wasn’t available in South Korea until much later. The Tonga ilbo was a paper sympathetic to opposition movements and supported the kinds of narratives offered by Kang and others that exposed the human costs of rapid industrialization. Here Kang describes Sǒnbi’s first lesson at the Taedong Spinning Mill:

The noise coming from the generator and the rotating waku was so ear-splitting that it was almost impossible to concentrate on the factory floor. . . .
From here at station No. 500 the line still stretched into the distance, with hundreds more stations. Her face flushing in the heat, Sǒnbi watched as the thread tips were drawn up and out of the cauldron. Kannan’s hands were already bright pink, scalded by the boiling water. Her fingers were white and swollen.

The novel’s main arc brings us through the characters’ trials and tribulations—each trying to survive in the new economy and each coming to class-consciousness, which brings the warmth of solidarity and the strength of purpose, but at great cost and little hope for actual political or economic gains. We see the risks and actions taken by these ordinary people in order to expose the mistreatment and lies at the Taedong Spinning Mill. The men help from the outside by passing information, and on the inside, the women are at constant risk of being raped and are subject to interrogation, intimidation, continual economic exploitation. There is also the ever-present risk of illness and death because of the extremely dangerous working conditions. One of the great strengths of Kang’s novel is the sensitive way she portrays the emotional lives and friendships of the women caught up in these impossible circumstances.

If Kang could have lived to see the realities of not just the Korean peninsula, still divided today, but the entirety of human civilization and its widening gulfs between the wealthy and the poor, she would, I hope, conclude that her literature is as important as ever. Human trafficking for sex and labor, including the trafficking of children, is at an all-time human high and is estimated at 27 million persons worldwide1, despite our species’ progress in knowledge, technology, and procedural democracy. According to the U.S. State Department, in the U.S. alone “some 18,000 to 20,000 people are trafficked every year.”2 Novels such as From Wǒnso Pond give details and dimensions to the suffering endured by millions of exploited workers and indentured persons around the world, still working in conditions no better (and often worse) than those depicted in Kang’s story.

Kang ends her novel, ultimately a tragedy, with this plea: “People have fought for hundreds and thousands of years in an effort to solve [these human problems]. But still no one has come up with a solution! And if that’s the case, just which human beings will actually solve these problems in the future? Just who?”