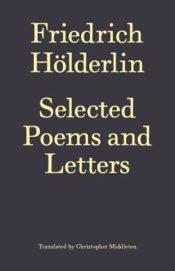 The work of German poet and singular visionary Friedrich Hölderlin (1770-1843) embodies the essence of the poet-as-seer. His ethereally divined poetic compositions manifest themselves primarily in regard to the individual’s engagement with the natural world, albeit telescoped beyond the confining lens of historical time and place. In Hölderlin’s writings, myths intermingle with experience as distant lands become one with the world outside his window. In 1796 he tragically fell in love with a married woman, Susette Gontard, while serving as pupil to her sons, but aside from one or two brief periods, they were never to be alone together. In 1802 he trekked across Europe through the aftermath of the French Revolutionary Wars; reaching Stuttgart “he appeared among friends looking ‘deathly pale, very thin, with hollow wild eyes, long hair, and a beard, and dressed like a beggar.’ Gontard died shortly thereafter without his ever having seen her again; their love is both mourned and celebrated in his work. From 1803-06 onward, Hölderlin wrote very little, gradually falling in to a state of madness from which he never recovered.

In 1967 the University of Texas issued a slim collection presenting a selection of Holderlin’s letters accompanied by those of fellow poet-seers Arthur Rimbaud and Hart Crane. William Burford oversaw the selections of the latter two, while British poet Christopher Middleton (1926-2015) undertook the selecting, translating, and notating of the Hölderlin. Over the ensuing decades Middleton continued pursuing his interest in Hölderlin’s work: In 1972 he published Selected Poems of Friedrich Hölderlin and Eduard Mörike, and returned to translate further poems in later years, as well as penning critical essays regarding thornier intricacies faced when translating the poet. This new posthumous collection gathers all of Middleton’s endeavors regarding Hölderlin into one volume, making it ideal company for both the acquainted and unacquainted reader alike.

In an introduction, Middleton demonstrates a keen translator’s reckoning of language use by his subject, while also fully bringing it vividly to life for the reader:

Hölderlin is converting the involutions of German syntax into concentrated forms resembling Chinese ideograms. Certainly it is poetry departing from plain linear progression, or, to put it picturesquely, poetry as a field of vision crossed and recrossed by whirlwinds of fire. That, perhaps, is how Hölderlin experienced ‘ideas’: they crossed his mind like whirlwinds of formal sensation. One thus has to be careful when one asks what is the true axis of a particular word in its context, or what is its function in that context. One can intuit the radius of a word’s connotations, but one is hard put to define that radius. One has to allow for the fact that connotations valid then may not be perceptible (or translatable) now.

Middleton’s notes to the poems are equally indispensable. He describes how with poems such as “Patmos” (1803), he “opted for a freer layout” with the lines upon the page, breaking from Hölderlin’s original and aiming to “sharpen the profiles of particular words and phrases, and to invest the English with some of the glowing and vigorous rugosity which H. achieves by rhythmical turns, elliptical syntax, eccentric word order, and changes of key.” With the fragmentary later poems he also likewise moves into a freer layout, “prompted by the gaps and silences in some of the originals.” This is both startling and quite lyrically effective. For instance:

is turned out as:

The result will likely rub the more purist-minded the wrong way, yet Middleton’s version is anything but stilted.

It’s remarkably edifying to have Middleton’s critical prose appended here to the poems and letters, as they detail his engagement with Hölderlin across the span of his mature writing life. His 1967 review of Michael Hamburger’s translation not only provides an inspiring openness to contrasting takes, but also allows opportunity to compare earlier versions of some lines as rendered by Middleton that he later revised when publishing his own efforts. Similarly, both “Syntax and Signification in Hölderlin’s ‘Andenken’” and “A Spirit Voice in Loose Alcaic Measure” are exactly the deep textual dives they sound to be. And when Middleton remarks in “The End of ‘Andenken’” that “Hölderlin hears first in the elements and then relayed into culture an infinite and terrible cry, such as Heraclitus and Yeats heard in the elements as a ‘clash of arms’, Milton as a ‘singing through all her [nature’s] works’, Boehme as a turbulence in the godhead itself,” we are left hungering for more from both poet and translator alike.

In this fine collection, the depth of Middleton’s knowledge of his subject is on full display, and his humble yet assertive authority is consistently revelatory. The Last Books thus not only delivers a fine tribute to Middleton, but also ushers into print an excellent introductory text to Hölderlin’s life and work.