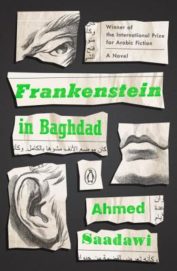 Ahmed Saadawi’s new horror novel has the simple but timely premise of retelling Mary Shelley’s Frankenstein in the context of Baghdad during the Iraq War. Hadi, a junk dealer who lives in a dilapidated building in the historic district of town, brings back body parts blown up by explosives, attaches them together, and brings the result to life through an unknown astrological magic. The monster, here called Whatsitsname, then goes missing from Hadi’s residence and starts killing.

Shelley’s original narrative is complicated by the fact that Baghdadi citizens are already in a constant state of terror before Hadi creates his monster. Multiple bombs go off in the city throughout the day (some explosions worse than others), and minor characters are steeped in Iraqi history. Hadi’s neighbor Elishva still waits for her son who went missing in the Iran-Iraq War; her other children who live in Melbourne wish her to leave but she stubbornly refuses, waiting for her son to return. Abu Anmar, the owner of the Orouba Hotel, moved from Northern Iraq. Aziz the Egyptian, who owns the coffee shop, is an expatriate who came to Baghdad for a better life. Colonel Brigadier Majid, head of the Tracking and Pursuit Department, is trying to stay alive as a loyalist of Saddam Hussein’s Ba’athist regime.

Saadawi’s village of characters all have their own stories and motives, but it is clear that the community is entrenched in stubborn fear and class inequality. Faraj the realtor wishes to buy as many properties in the Bataween district as possible to make a maximum profit. Ali Baher al-Saidi, the publisher of the magazine al-Haqiqa, is only interested in his own well-being and notoriety as an editor. Brigadier Majid hunts the Frankenstein monster not for the safety of the community, but for his own political desires to become a more powerful military figurehead.

When a journalist obtains recordings of the monster, we discover that the Whatsitsname, ironically, is the most eloquent individual in the entire novel. The monster’s belief in extrajudicial justice for murderers and war criminals in Iraq leads people to an insurgent movement complete with astrologers and magicians able to predict future explosions and the locations of enemies. The monster must continually replace his body parts with those he murders because they consistently melt and deteriorate in battle. By the end, Hadi is arrested for his crimes and Whatsitsname is left snuggling with the old lady’s cat in the junk dealer’s residence.

Americans are always at the periphery of this novel, whether as menacing soldiers, an army with impunity, or just those from whom there is consensus among Iraqis to stay away. Frankenstein in Baghdad answers the question, “Who or what is a terrorist?” with “That depends.” To all the citizens of Bataween, the monster Hadi creates is as frightening as any American soldier. More conspicuously, the city of Baghdad is a constant place of fear because a suicide bomber could come at any time to cause suffering, destruction, and mass tragedy.

The Whatitsname is a bodypolitik of Iraq from 2008-12, the by-product of sustained violence in a Middle Eastern urban cultural and social center. It shows that whether people live peacefully or violently, arguing over ideology, political affiliation, or racial and religious divisions, they always end up in the same layer of history. A national culture and historical memories collide and ferment to create the present social reality of the Bataween neighborhood.

Frankenstein in Baghdad is a rare novel for how simple its structure and tone are on the surface. Saadawi’s sentences are smooth, crisp, and McCarthy-esque; translator Jonathan Wright does an incredible job of bringing the haunting, brooding rhythm of the words to life. The war novel after Iraq is alive in America, and an Iraqi perspective here gives a shot of high voltage to a reanimated discussion.