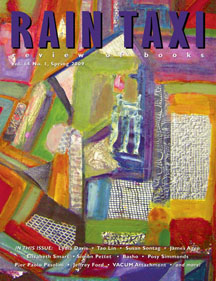 Fran Herndon met Jim Herndon in Paris in the late 1950s. They returned together to San Francisco where Fran met and became friends with the central poets and artists of the San Francisco Renaissance, including Jack Spicer, Robin Blaser, Robert Duncan, and Jess, and today with writers such as George Albon, Norma Cole, and Kevin Killian. At Spicer's insistence, Fran began taking print-making and painting classes at the San Francisco Art Institute, thus beginning her ongoing life as an artist. Her prints appear alongside Spicer's poems in The Heads of the Town Up to the Aether. Her sports collages, originally printed in Everything as Expected, were reprinted with some of Spicer's poems in The Golem, published by Granary books. In addition, Herndon's artwork was on a SUNY Buffalo Special Collections Library Holiday broadside, and on the covers of books by Elizabeth Robinson and George Stanley.

Recently Herndon has been making paintings, drawings, and pastels; she has shown her work at Canessa Park Gallery in San Francisco, where she will have a retrospective show in September of this year.