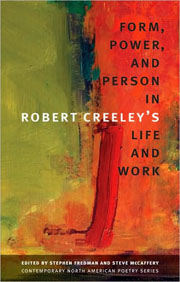 Robert Creeley held a privileged and problematic role in American poetry, and his death marks the end of a critical stage in its development. As Stephen Fredman and Steve McCaffery’s Form, Power, and Person in Robert Creeley’s Life and Work makes clear, Creeley bridges Modernism with Postmodernism: grounded in his early passion for D. H. Lawrence, Wallace Stevens, William Carlos Williams, and Ezra Pound, Creeley held a central place at the heart of various mid-century poetry communities, including Black Mountain College, the second generation New York School/northern California nexus of the 1960s and ’70s, and the beginnings of the L=A=N=G=U=A=G=E school. Throughout Creeley’s work, his concern is always to be there in the writing and the living, merging them into a single take, and to expand upon how one goes about knowing, engaging, and getting on with it: continually facing the present act of writing without predetermination or anticipation of the finished poem.

Form, Power, and Person marks the occasion of a SUNY Buffalo conference in October 2006, a year and a half after the poet’s death, where versions of these essays were first presented. Sudden, wintry environmental conditions nearly forced a complete last minute cancellation, and “participants spontaneously shifted panels from the unreachable north campus to a conference room at the hotel,” shrinking the audience to mostly one of fellow presenters—which makes this publication all the more a blessing. This collection provides a range of fittingly varied critical approaches, though the emphasis throughout is on the poems, with little to no attention given to the numerous essays, reviews, stories, or other work; however, there is a substantial focus on connecting the poems to various practices of Creeley’s living as evidenced in his interviews, correspondence, and teaching.

Although this is a particularly academic grouping, the broad range and style of writing hardly ever makes for dry reading. In his introduction, Stephen Fredman remarks that, “One of the hallmarks of [Creeley’s] writing and conversation alike was a personal vocabulary and syntax” and further observes how “Creeley’s nakedness is most conspicuously displayed in his intimate relationship with words.”Fittingly, included here are valuable engagements with Creeley’s early years of conflict over his identity as a man and husband, friend and lover. Michael Davidson takes up careful consideration of Creeley’s poem “The Finger,” making connections evident with the masculine rage Rachel Blau DuPlessis explores in her treatment of the complex layers of Creeley’s obsession and appraisal of “hole” imagery, from his own childhood loss of his left eye to the occurrences of vaginal and rectal references.

Marjorie Perloff offers an acute reckoning of the, dull negative commentaries churned out on Creeley throughout the ’60s and ’70s—which leads into a close reading of Creeley’s “The Rain” in relation to Williams, Robert Lowell, and Apollinaire, as well as brief consideration of Creeley as a non-Concrete poet via Augusto de Campos. Both Charles Altieri and Alan Golding pursue distinctive critical discussions of specifics of Creeley’s poetic sequences of the late ‘70s and ‘80s. Peter Middleton gives a personal remembrance of his time as a student of Creeley’s in Buffalo during the fall of 1977, which he manages to lead into useful consideration of Creeley’s particular tactic of sharing with the class his own poetic meandering thought in monologue musing during any particular week. While it’s interesting to hear that assigned texts included Charles Olson’s The Special View of History, Robert Duncan’s The Truth & Life of Myth, and Duncan McNaughton’s Sumeriana, it is more interesting to hear that Creeley

did not teach Olson’s work, for the talk was not, as most professors would have offered, about authors and texts . . . the lecture appeared at first to meander around what one might loosely call epistemological (he himself avoided all such jargon) questions, which Creeley carefully traced out, following one lead and then another as the sequences of thought reached a conclusion only to point out a new trail, or come to a dead end that necessitated starting over.

Middleton’s residual excitement throughout is infecting:

The overriding emphasis in these classes was on the “authority of information” we should look for in poetry . . . no existing knowledge carried such authority. Even the authority of his own discourse should not be taken for granted. His performative teaching continually demonstrated right in front of us the importance of the practice of learning and writing which informed his poetry, in the hope that we would learn to emulate the rigors of such inquiry in our own research and possibly our own poetics, rather than file his utterances as facts.

Benjamin Friedlander’s adept discussion of Creeley’s writing as experience takes account of how poems, for Creeley, are based in living moments: “consider ‘The Act of Love,’ a poem in which Creeley tries to work out what it might mean to perform love—not the physical act of making love but the experiential act we call being in love.” As so often is the case in Creeley’s poems, it is the exercise of thought which informs the poem. Peter Quartermain explores the question of what makes a “political poem” for Creeley, emerging after a thorough consideration to the realization that Creeley’s poems “engage the reader in immediacy of apprehension and thought” and that as Creeley himself said, “Language is a political act.”

In his later poems celebrating memories of past friendships, Creeley continued living the writing, as Libbie Rifkin’s opening reference to “for Mitch” in her essay on Creeley’s friendship with Denise Levertov attests: “a poem of great regret, both for the general fact of surviving, as he put it in another poem, ‘the continuing, echoing deaths’ of so many good friends, and, more painfully and particularly, for not having been a good friend.” Such memorial poems, “reflect . . . distance, but they also suggest something of the tone of the relationship at . . . periods of real significance.” Creeley engages with the past, present, and future by re-living the past through the writing and allowing his own feelings and understanding of the relationship to unfold within it.

This collection offers opportunity for understanding Creeley’s “growth” evidenced in his poetry from the ’50s onward, providing an entry point for the uninitiated as well as offering much for the familiar student and scholar. The majority of writings presented are not available elsewhere, and the few that are have been revised. It remains fascinating how many sides to Creeley are to be found in his poetry, interviews, and correspondence. The poet never turns the same ear in the same manner twice.

Despite various criticisms during periodic changes in his work, Creeley never wrote the same poem—except, in his own words, to “find [him]self saved, in words.” This collection stands as testament to the lasting value the work shall continue to hold for readers: drawing them in, only perhaps later to repel them, and then draw them in again. By turns, Creeley’s work is playful, bothersome, loving, proverbial, probing, offensive, mad, inspiring, and tyrannical. Above all, it offers evidence of a wisdom-fool who arrives at no definite answers in pursuit of profound questions throughout his life.