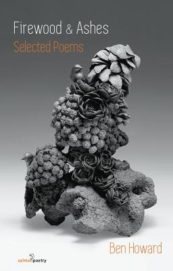 Ben Howard writes a flawless blank verse, which he often hinges onto a narrative structure in an almost novelistic way. His iambics are as thorough and stately as anyone’s on the planet. His 1997 book Midcentury, represented in this new and selected collection, typifies both his measure and his gift for telling a story. Though from Iowa, Howard is obsessed with Ireland; his connection to that land is through his sensibility as much as his scholarship. Howard is also author of the essay collection The Pressed Melodeon: Essays on Modern Irish Writing (1996), which contains some of the most insightful writings on such authors as John Montague, John McGahern, Patrick Kavanagh, and Derek Mahon.

Midcentury is not a corny, sentimental Irish tale; the sequence begins with a poem entitled “The Word from Dublin, 1944,” a poem set during World War II, when Ireland had declared its neutrality throughout the worldwide conflict. Here is how it starts:

I can’t begin to say what brought me here,
Unless it be the Irish predilections
For whiskey and horses, both of which entail
A certain risk and a less-than-certain gain.
To be a middle-aged American
In Dublin in the middle of a war,
Of which we’re hearing more or less than nothing,
And that in fragments, bits of veracity—
A mutilated bulletin, a headline—
Is to see one’s lot reflected in the stories
That come to us distorted, if at all:
Stories of heroism, sacrifice,
Or, more often, utter devastation.

Howard goes on to write that he knows “next to nothing” about Irish horses, and regarding Irish whiskey, he says that it “soothes the brains it hastens to dismantle.” This persona has a voice freighted with mystery akin to a narrator in a novel by John Le Carre or Graham Greene. The voice is soft and quiet, sophisticated but full of subtle judgments, which the narrator calls moralysis, and he admits being inclined to it:

Which causes Iowans to see the world
As more coherent than it really is
And gamely to construct a moral dream
Where black is black, and a promise is a promise?

Who in their bleakest hour has not considered Iowa?
We live in a place where everything leans in

as if to confide in us, and learn, too late, it is a trick:
the frieze, the whole entablature must topple,

as the drunk on the bus, in the course of his life story,
anoints us with cidery spittle, as the ash

from a thousand fag-end sunsets settles on us.
But Iowa.

Iowa is different, according to O’Reilly; it is yellow for as far as the eye can see, yellow “as the cere of the bald eagle / hanging with locked wings on thermals. / Iowa is rising.” But Geis shows more than a poet pining for a place she’s never been. This is a collection of lyrical sensibility, an intellectual and emotional exploration, an archeology (a field the poet studied as an undergraduate at Trinity) into the various layers of Irish culture and civilization. Like Seamus Heaney’s early poems, O’Reilly’s work mines not just the possibilities but the philosophical underpinnings of a people and their place in the world. These are smart poems, and yet they wear their smartness as one might wear a loose garment, making their utterances elegant and even charming, but always full of probing questions—the scholar’s pursuits. Certainly Caitríona O’Reilly is a smart poet, a well-educated one, but more importantly, a lyrical intelligence informs her erudition.

These are beautiful poems, full of imagery and intention that makes a reader pause and think. From the first poem, “Ovum,” we are introduced to an almost classic Irish sensibility in which words and their origins are not just background, but also the foreground to the poem: “the meat / of the word made orotund and Latinate.” She writes: “It’s like putting your mouth to the smooth / breast of the ocarina, from oca, the goose, / hooting out its fledgling notes.” I am reminded of the opening beat of Dubliners in which the words “paralysis,” “gnomon,” and “simony” become important to the young narrator of “The Sisters.” The Irish are nothing if not great caressers of words—stroking them, lingering over their surfaces, but also going back to the ninth-century scholarly monks, lovers of etymologies. Caitríona O’Reilly is just such a poet. 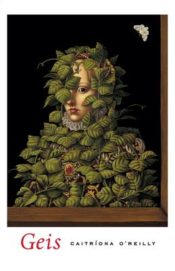 Geis is an Irish word, meaning a supernatural taboo or injunction on behavior. It is a word that resonates throughout this collection. It is suggestive of the forbidden, and yet these poems are austere, even regal, so that it is not the light of these poems, but rather the shadows they cast which are ultimately most intriguing. It is that afterglow of the geis, its residue, which lingers, not so much a song as the last echo of a song. These poems, especially the title poem, are about the rupture of the bifurcated self, of the poles of the human spirit in dramatic tension with each other. There is even a poem entitled “Blue Poles,” named after a famous Jackson Pollock painting, in which O’Reilly writes that “there was nothing left to do”

but plant blue poles among the spindrift and iron filings
and step, clutching your brass chronometer,
clean off the deck and into the sky
where a lens rose to meet you like a terrifying eye.

Irish poetry had a Renaissance forty years ago, mainly with male poets from the North (Seamus Heaney, Derek Mahon, and Paul Muldoon, to name a few). But what is happening today is something different entirely. Ireland has come up with a congress of women poets who represent the collective consciousness of the Irish people (Eiléan Ní Chuilleanáin, Eavan Boland, Medbh McGuckian, Nuala Ní Dhomhnaill, and Sinéad Morrissey, among others). Caitríona O’Reilly is one of the most important voices in that new Irish renaissance. Hers is a complex, lyrical, archeological, resonating, probing voice, one that is as intellectually restless as any wandering Celt in the Irish past, either mythical or historical. This is a most important book whose urgency is confidently erudite, quietly fierce, and lyrically determined.

Click here to purchase Geis at your local independent bookstore