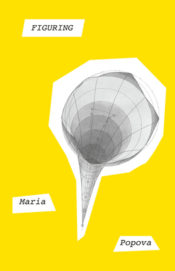 Astonishing in heft (almost 600 pages), in scope (lives, works, and milieu of selected European and American scientists, artists, and public intellectuals), and in articulation (attending as much to language and imaginative association as biographical fact), Maria Popova's Figuring is an ode to the quality of astonishment itself. Readers familiar with her online newsletter Brain Pickings will recognize her methodology; primarily associational, contextual, inquisitive, and compassionate, she imbues her subjects with more than chronology and lists of achievements, burrowing into significant fortunes and misfortunes of individuals, family, communities, and world events—and their shapings on creative life. Deeply personal underlying questions from Popova provide a means of connecting a singular person's talents and drives with the forces of the time in which they lived. Who did they love, and how? Within the constraints of society, where were the niches of freedom? What opportunities and intersections pulsated and solidified to form the crucibles in which discovery happens and by which future generations can still marvel and make use of their ideas, achievements, writings, images, and breakthroughs?

The remnants of people's lives—scientific eureka moments, poetry, sculpture, social reform, refinements on what came before—provide the impetus for travelling into personalities and circumstances, a process of discovery for author and reader alike. Using letters, diaries, notes, and her own imaginative suppositions, Popova profiles Johannes Kepler, Maria Mitchell, Margaret Fuller, Harriet Hosmer, Emily Dickinson, and Rachel Carson, primarily, with many more attendant figures constellated. Lives fraught with historical significance are mined for more personal motives, frameworks, relationships, disappointments, emotional tenors, and chance accesses. Beyond labels of "good" and "bad" and no matter what else they bring, our human temperaments coalesce in the acts and artifacts others remember. What would Emily Dickinson's brilliant, morose, out-of-step poems be, for example, without her propensity to high romance, her circumstance as tortuously unpartnered, her turn to reclusiveness?

In a forword that should be read by everyone for its aria of praise and gratitude to symbiotic life on Earth, Popova approaches a kind of mission statement:

Some truths, like beauty, are best illuminated by the sidewise gleam of figuring, of meaning-making. In the course of our figuring, orbits intersect, often unbeknownst to the bodies they carry—intersections mappable only from the distance of decades or centuries. Facts crosshatch with other facts to shade in the nuances of a larger truth—not relativism, no, but the mightiest realism we have.

She starts, like an archaeologist, with the known artifacts of work left behind, combines them with biographies and the facts of cosmic and societal events, and then map-makes by feeling into the associations and connections, psychologies and possibilities. The lives she re-animates are mostly women, often queer, primarily unconventional sorts, and part of the energy here lies in the tension of obstacle and prejudice in creative expression.

The book's genre may be "essayistic poetic investigative journalistic sociological individualism," if such a category existed. Unlike Joan Didion and Tom Wolfe's "new journalism" of the mid-twentieth century, Popova's point of view asserts mainly as her own mind's wondering and wandering framework for highlighting objective characters and events. While we do learn some personal details—that she came from her native Bulgaria to Brooklyn for love, for example—her "I " remains in meaning-making service to the lives she encounters while demonstrating that these encounters have affected her to the extent that we hold the artifact of such in our hands. While the book could also fit into the "lyric essay" genre, perhaps the jacket bio captures the essence best: "Maria Popova is a reader and a writer, and writes about what she reads." {back jacket flap}. Bringing an often scholarly endeavor (and one can see another version of this as a graduate school thesis) into the public cultural discourse for a literary populace is part of its gift.

How a person’s genius (Latin for "guardian spirit") meets genius loci, "the distinctive atmosphere or particular character of a place,” {American Heritage Dictionary} is the true study in Figuring. People who have made memorable marks in the world have somehow accessed their own exceptionalism within the distinctive atmosphere of their time: nature meeting nurture. The "somehow" is Popova's resonant portal for investigation, and we keep reading on because of the amazing arrangements of talent, chance, people loved, people lost, fortitudes, illnesses, first glimpses, Utopian visions, social exclusions, and other acts taken and not taken. She engages her subjects-characters-figures with dramatic tension, mystery, their own words of contradiction, and a dynamic interplay of forces.

And awe. Like Andrea Barrett's fiction, like Annie Dillard's non-fiction, Maria Popova's writing latches a chronicle of people, science, art, and history to the heart through a reverence for life's unfolding into particulars. Beginning with the words "All of it" and ending with "stardust," she shows that she is a worthy guide, a cosmic citizen aware of the awesome ephemeral presences of us all. Clearly, beautifully, and thankfully, genius and genius loci have coalesced in Figuring.