The secular minority in America has grown to its all-time highest proportion of the population: 15%. Small as this number sounds, it’s roughly double what it was twenty years ago. Statistics like these, and facts like Barack Obama’s thought to include “nonbelievers” in his inaugural address, sent Phil Zuckerman off to investigate why our country—among the most religious in the West—is losing some of its religion. 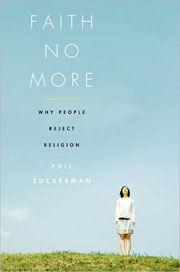 A sociologist, Zuckerman pursued this question by conducting eighty-seven formal interviews with self-identifying apostates. These subjects span a wide range of ages, ethnicities, education levels, and religions abandoned, but they skew in the direction of white, ex-Protestant Californians aged twenty to sixty. Because Zuckerman’s method is inductive, the reader should keep the demographics of his samples in the back of her mind. The front of her mind, however, should be left for the stories of the apostates, which are the highlights of the book.

Zuckerman presents a classification system of different types of apostasy, and he organizes his chapters around recurring themes, but he leaves the apostates plenty of room to tell their own stories in large chunks of transcribed text. As a general rule, people who have made intentional decisions are more articulate about their conclusions than those who come across their positions accidentally. Unlike people who are conveniently born into their preferred religious (or secular) environments, apostates—often at the cost of friends and family, and despite social pressure and personal inertia—have ruptured a major part of their self-identity, and they tend to be pretty good at saying why.

One of the things to notice in the self-reporting in Faith No More is the humility of the subjects. For example, Stanley, a former minister-in-training, is entirely un-dogmatic in talking about religion:

I would say I’m definitely not a religious person, but . . . I don’t feel that I need to call myself an atheist really, because to me that feels like I have something I’ve got to prove. . . . So to me, I guess I could maybe say that I feel there’s a part of me that could be spiritual, but I don’t like that term because it’s connected with religion. I guess in the end, I would say I know there’s aspects of my experience that I cannot explain through logic and reason and I just kind of leave it at that.

Having sacrificed religious certainty, Stanley embraces his limited understanding. But such acceptance doesn’t come easily for all. Another apostate, Trent, laments the sense of purpose he lost with religion: “I still don’t necessarily have a clear sense of purpose for my life. Which is something that I miss. Because it just feels so much more secure, like: ‘I KNOW why I’m here. . . . I KNOW my goals.’ Like, I don’t really have that anymore.” 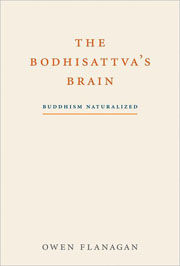 Developing or locating a workable worldview for oneself is a fundamental human responsibility, and one that is perhaps felt most acutely by apostates. It’s just such a worldview that Owen Flanagan presents in The Bodhisattva’s Brain—a naturalized Buddhism that is workable in the age of neuroscience and compatible with empirical research—writing that “Buddhism being intellectually deep, morally and spiritually serious but nontheistic and nondoctrinal . . . may sit well poised to be an attractor for the spiritually inclined naturalist.” Flanagan, who is “allergic to hocus pocus,” gives a version of Buddhism stripped of all supernatural elements that he thinks is among the best approaches our species has yet developed in response to the challenge of finding meaning and flourishing in this world.

Imagine Buddhism without rebirth and without a karmic system that guarantees justice ultimately will be served, without nirvana, without bodhisattvas flying on lotus leaves, without Buddha worlds, without nonphysical states of mind, without any deities, without heaven and hell realms, without oracles, and without lamas who are reincarnations of lamas. What would be left? My answer is that what would remain would be an interesting and defensible philosophical theory with a metaphysics . . . an epistemology . . . and an ethics.

Eschewing anything that can’t be empirically verified or at least defended, Flanagan is left with a non-religious Buddhism that serves many religious functions: describing an intellectual/metaphysical orientation, establishing a mutually supportive community, and providing a moral framework for adherents. But Flanagan doesn’t offer these functions as their own defenses; rather, he appeals to the way the world is—his naturalized Buddhism can be held only provisionally insofar as it is true. Flanagan attributes the claim “that Buddhism should not commit itself to any beliefs that are not also scientifically credible” to the Dalai Lama himself. In defending his take on Buddhism, then, it’s worth Flanagan’s time to spend some energy demonstrating how the metaphysics that will be foreign to some readers is not incompatible with science. This includes thorough explication of dependent origination—“everything that happens depends on other things happening”—and anatman—the rejection of an essential self that follows from dependent origination.

Flanagan’s attention to metaphysics demonstrates the care he takes to avoid the common Western reduction of Buddhism to certain extractable features. Meditation, for example, is a practice that can be taken out of context and used toward various ends, but Flanagan is interested in Buddhism as a single coherent system that utilizes meditation to confirm metaphysical claims about the nature of the (non-)self (anatman) and cultivate correct ethical and epistemological views. And the purpose of all this? To achieve Buddhist-defined flourishing, which “comes, if it does come, from practices that aim at enlightenment / wisdom and virtue / goodness via meditation.” All of which serves “to direct our natural urge to happiness to the right sort of happiness and then to work with reliable methods to achieve it.”

Yes, happiness of the right sort. Buddhism defines happiness according to Buddhist values, which tautology it attempts to avoid through the claim that the values follow from the metaphysics. Flanagan himself isn’t sure this follows (in particular he’s unconvinced that anatman should necessarily lead to selflessness rather than hedonism), and it remains an open question whether one must fully comprehend the ins and outs of Buddhist philosophy to practice it, but The Bodhisattva’s Brain gives a careful and deliberate analysis of these issues.

Flanagan’s book is a fairly dense example of analytic philosophy, and the reader looking for a friendly introduction to Buddhism is advised to look elsewhere. But those interested in the effort to construct meaning from the secularized stuff of experience will find a sincere effort and helpful model in Flanagan’s Buddhism. Demonstrating the Buddhist concept of upaya—adapting one’s approach to suit particular circumstances—Flanagan gives us a Buddhism compatible with our scientific understanding of the universe that affords one of our best opportunities to cultivate human flourishing today.