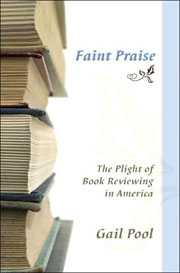 by Marcus A. Banks

Gail Pool cares about book reviews. She wants them to be critical and incisive, not tentative and formulaic, and she believes they can make a difference in reader’s lives, or at least provide meaningful guidance about what’s worth reading among the nearly 200,000 books published annually in the United States.

As an experienced reviewer and editor, Pool understands why reviews almost always falter, and she exhaustively catalogs the challenges facing book reviewers before offering remedies. A sampling of the difficulties: the pay for reviewers is low or non-existent; most reviews are written on tight deadlines, causing reviewers to resort to clichés and generalities; famous novelists snag plum assignments even if they have no talent for criticism.

These difficulties are symptomatic of a larger problem: most people consider book reviewing to be something anyone can do. What can be so hard about reading a book and writing about it? This is definitely the viewpoint of the reading public, but—as Pool attests—it is also what review editors (and implicitly, reviewers themselves) believe. Why else would editors assign books on any topic to any reviewer, rather than attempting to match book to critic? Why would reviewers accept poor assignments? Pool persuasively argues that reader review systems like Amazon’s—which reward quantity rather than quality—have further devalued the prestige of reviews.

Pool’s most trenchant passages are about the subtle pressure on novice reviewers to present unwarranted encomiums. The American tendency to equate criticism with nastiness also discourages honest reflection. While Pool also wants to read reviews of the books “we want and need to know about,” she longs for critical acumen rather than faint praise. To that end, she offers several suggestions designed to increase critical rigor, including employing columnists to cover book beats rather than assigning reviewers random books, and allowing reviewers to return a book they do not deem worthy of review without incurring an editor’s wrath.

These suggestions are all designed to enhance the casual review, so that it is closer to the standard set by leading intellectual publications. The cold truth, though, is that most readers do not prize intellectualism as much as Pool, and as she acknowledges from the beginning, lamentations about the poor state of American book reviewing are more than 200 years old (“If book reviewing in America has declined, it is hard to say from what glorious pinnacle it has descended”). Still, better reviews make for better readers, and that is always a worthy goal.