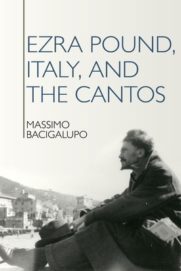 Ezra Pound, Italy, and The Cantos unveils an intimate portrait of both poet and poem. Massimo Bacigalupo’s study is conversational in tone, yet nevertheless scholarly and astute, offering an overview of Pound’s many attachments to his adopted country. The book is composed in a series of snapshot-like chapters written in first person and covering the decades from Pound’s first visits to Italy up to his final years there, with a diverse assortment of stops in between. Bacigalupo had the serendipitous fortune to grow up in Rapallo, on Italy’s northwestern coast. A renowned locale celebrated for its great natural beauty, the hiking is excellent and the water is clear. Rapallo is also where Pound first rented an attic apartment in 1925, soon settling down there with his wife Dorothy, eventually relocating his parents from America and enjoying notable visits over the years from W. B. Yeats, Basil Bunting, Louis Zukofsky, and James Laughlin, among others.

Pound would compose much of his monumental lifework, The Cantos, in and around the small coastal town. Pound’s additional life partner Olga Rudge, mother to Pound’s daughter Mary, also came to live atop the hillside above Rapallo, in Sant’Ambrogio. Bacigalupo recalls Rudge’s visits with his parents when he was a child and in later years his own growing interest in the arts led him to interact with both Pound and Rudge on his own terms. This was after Pound had returned to Italy in 1958 from his decade-long imprisonment at St Elizabeth’s hospital outside of Washington D.C., where he had been placed under psychological care for possible insanity following a life-threatening charge of treason for the anti-Allied radio broadcasts he made from behind enemy lines during WWII.

There have, of course, been many previous books written on Pound and The Cantos, yet by focusing on interesting gaps in the record, Bacigalupo manages to extrapolate upon the work of others, filling in details while commenting upon the poem itself in a surprisingly refreshing manner. He admirably takes on the difficulty of reading Pound, acknowledging that, “This work requires full immersion, a capacity of suspending disbelief (and even, sometimes, moral judgement), and may look arid and unpromising,” and he usefully suggests that, “The discontinuity of language may appear an obstacle until we remember that the reader of The Cantos is expected to be equipped with Pound’s own knowledge” before continuing on to make the rather startling yet utterly revelatory claim: “In fact, The Cantos are primarily written for one reader—Ezra Pound.”

This is excellent guidance for any reader struggling with Pound’s colossus of a poem. It is worth being reminded what an unusual mind Pound possessed for pulling together incongruous (if not contradictory) elements within the labyrinthine layers of his poetry. He may not have always been entirely accurate in regard to the associations he drew together, either. Bacigalupo claims that need not matter, at least in so far as there was a larger goal: “Pound himself probably forgot in time what many of the names and references in The Cantos were about. He remembered, perhaps, his interpretation of them, which wasn’t necessarily correct. The feeling, not the meaning. What he wanted to say, not what he in fact said.” Seen in this light, the poetry is intended to evoke not literal reality but rather the poet’s vision of reality, what the reader is only capable of seeing if they look through the poet’s eyes.

Staunchly supportive, Bacigalupo nevertheless recognizes Pound’s linguistic limitations. He describes the controversial and (for a time) suppressed Cantos 72 and 73, as “experiments by Pound in a language, Italian, which he never mastered but for which he doubtless had a very good ear.” And when it comes to Pound’s version of Italian writer Enrico Pea’s “Moscardino”, “the sheer number of misreadings . . . is staggering and reveals that his knowledge of Italian was largely inadequate. Either he could not see the words on the page, or he just didn’t care what the original text said so long as he thought he got it right.” Bacigalupo sees a similarity with Pound’s earlier Sextus Propertius: “A common trait of both works is that Pound rarely departs from the letter of the text—he perverts it and transforms it, but he is always working on textual material.” Having such concise and keen critical insights into Pound’s working poetics expressed so matter-of-factly is quite refreshing.

Bacigalupo does not offer up many details from his own personal interactions with Pound and Rudge. Pound is known for his silence during his later years, so it is not too surprising to hear that “Ezra didn’t speak but was a friendly presence.” Bacigalupo does, however, possess an innate feel for directly communicating essential takes on Pound’s poem that are indispensable for readers approaching it. In his Afterword he describes how “The Cantos are a collection of stories, or allusions to stories. The talk of a life,” and he cautions that “Pound is the stuff of legend, and he also, somewhat like William Faulkner, did little to set the record straight.” Maybe, as he reports, “Nobody today reads Pound,” yet Bacigalupo gloriously insists “we will not be bored” for “There is in The Cantos a whole world.”