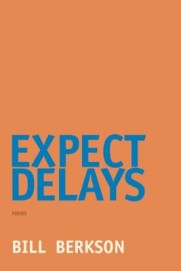 There are few poets writing today with the range and talent of Bill Berkson. The author of more than thirty books of poetry, collaborations, and criticism, his latest volume—Expect Delays—is typical of Berkson’s work in that there is nothing typical about it. One finds here Dante-inspired cantos, New York School-style prose, and excerpts from his diary—and while this gives his book a sense of scatter, it also keeps things fresh. Where other poets find a formula that works and then promptly poison themselves with it, Expect Delays is anything but formulaic.

As a follow-up to his Portrait and Dream: New and Selected Poems (Coffee House Press, 2009), Expect Delays brings together pieces written within the last ten years, including the chapbook “Not an Exit.” More so than other poets, one noticeable trait in Berkson’s work is that so much of it is engaged in conversation with the work of others, be they classical artists or friends from New York and San Francisco. Thus, many names (familiar and unfamiliar) wander across these pages, such as Frank O’Hara, Kenneth Koch, and Philip Whalen. While this could be dismissed as “name-dropping” in other hands, in Berkson’s it is a gentle reminder of how much is owed to one’s peers. Furthermore, the warmness with which he writes only affirms that the most prolific literary communities are those that in fact are a community.

The most universally appealing of the book’s sections is likely the sequence “Songs for Bands,” which makes up half the book. As the author explains in a long note, “Songs” was culled from a single Microsoft Word document in which he recorded dreams, quotations, diary entries, and short poems. Taking this writer’s notebook of “more or less impulsive jottings,” Berkson collages them, forming a text that shows a creative mind at work. Scenes flash past, for example, as he leaps from a nightmare (“I slip slowly into my mother’s mind, tangle there so much that panic ensues—I’m inside another person’s consciousness! What if I never returned? The strong sense that this is what it is to ‘go’ mad.”) to a New York Times weather forecast (“Dull with possibility of snow in the High Sierras.”). Then, just as quickly, his mind races to something else, maybe a belief about how art must justify itself (“Why should I look at this . . . instead of out the window?”). Many of these pieces are observational and tongue-in-cheek, such as “Seven Agnes Martins around a room do no one any good; art is best seen in specificity, alone in someone else’s bathroom, for example.” Or “August 28. Albert Gonzales resigns as attorney general of USA. John Ashbery becomes poet laureate of MTV. There must be some connection.”

“Songs for Bands” suffers from the problems all published diaries have, which is that some parts feel rough or underdeveloped; some lines read like first drafts, others like notes meant more for the writer than an audience. But even with these minor problems, the author elevates the writer’s notebook to its own art form, showcasing it as a distinct genre of literature. It is poetry and prose, essay and diary, a text whose value is its many forms joined together. That, coincidentally, is also the perfect description of Expect Delays and Berkson’s work more generally. Both refuse classification—and both are better because of it.