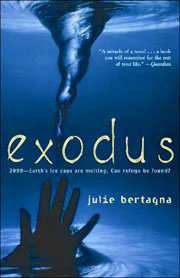 The recent climate summit in Copenhagen last December gathered the world’s leaders to address the impending calamity our planet faces, yet they couldn’t reach any real agreement on how to address the deleterious effects of our industrial progress. Global warming will not slow down and wait for bickering nations to catch up, and there is a real pressure to act now before we cannot reverse the damage that has already been done—or that is yet to happen. Julie Bertagna imagines a worst-case scenario in her young-adult books Exodus and Zenith, which follow the survivalist adventures of a ragtag group of people from all walks of life after most inhabited land has been swallowed up by the rising oceans. Her story is a wake-up call to perhaps the one growing group of activists that can maybe make a difference—the world’s young people.

Exodus follows the story of Mara in this not-too-distant possible future of Earth. The year is 2099; she, her family, and fellow villagers live on a tip of land called Wing in the Atlantic Ocean, the last bit of land (as far as they know) not engulfed by the ever-rising ocean water. The few breaks in the constant deluge of storms give them little time to repair damage done and meet collectively to discuss their dire situation, although few want to face the facts. Their memory of the past is vague, with little idea how they ended up this way—100 years can wipe out the advancements of the biggest civilizations, leaving tiny encampments of people living as farmers without any technology, except for what’s washed up on the shores of Wing. Mara escapes into one vestige of the pre-diluvian world, a cyberwizz: a globe-shaped computer fueled by solar power that connects her to the Weave, a vestige of the virtual world of the internet, “an electronic gravesite.” With her halo glasses and cyberwand, she can surf the dumping ground of knowledge left behind by the old society. While zooming around in the Weave, she meets another traveler, a fox who tells her he is from New Mungo in the New World, a city of impossibly high towers built upon an old drowned city in Eurosea. If Mara can trust the fox, and if the villagers of Wing can trust Mara, she may have found a way to escape their fate.

When Mara and the survivors of her village make it to New Mungo, they are confronted with the harsh realities brought on by a destroyed planet with dwindling resources. The “haves” live richly in the gleaming towers oblivious to the “have-nots” struggling to persevere in haphazard boat camps outside the gates of the city. As Mara ventures further into this alien world outside of her now-idyllic Wing, she sees the worst of humankind, but there are small pockets of hope. Groups of people have carved out livelihoods in the shadows of the towers: the nearly feral sea urchins, children who have lost their ability to speak but whose survival skills keep them one step ahead of the New Mungo sea police, and the Treenesters, who, as their name implies, live in the branches of ancient trees that somehow survive in the shadows of New Mungo. With the help of these groups she infiltrates New Mungo to save her kidnapped friends and escape the uncharitable and oblivious people of the city. Once again Mara leads more survivors to an uncertain future toward a possibility of salvation in the shape of new land. 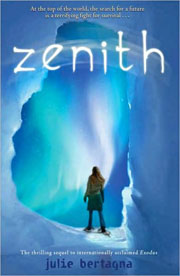 As Mara makes sense of what her cyberwizz reveals and the information in forgotten piles of books in the library of the old city below New Mungo, she pieces together what happened to her world. Even though the urchins, Treenesters, and, in Zenith, the sea-hardy "gypseas" of the floating city (hundreds of boats tied together with makeshift bridges) and the treacherous cave-dwellers of Ilira have renounced most technology (since little of it works, and most of it is foreign to them) and knowledge of the past, Mara realizes that knowing what got them where they are is crucial to their survival. But it is a hard sell, because the earth has forsaken these people. The gypseas curse with the word, “urth!” as they forget and reject the world of their “Landcestors.” Fear, distrust, and greed for any sort of comfort win out over careful thought and consideration about the future. It’s every person for him or herself. But despite missteps and great tragedy, Mara prevails as she leads her people toward a new future that she discovered in a book, Greenland, whose mountains, she theorizes, would rise above the waters buoyed by the melting glaciers. And her desire to survive draws strength from the people who believe in her and the people she loves, especially her love for Fox, who turns out to be a boy her age who she must leave behind in New Mungo. “I don’t know if there’s any happiness left in the world, thinks Mara. But there’s love. Maybe it’s strong enough to bridge an ocean.”

Both Exodus and its sequel Zenith are page-turners, filled with relentless adventure, hard decisions, and great sorrow. Bertagna keeps her characters moving, never allowing them to rest, even to the bittersweet end of the story. It is easy to fall for these well-written inhabitants of a doomed planet, sympathize with setbacks and losses, and cheer the very few successes they have in the ever-increasing struggle to find a place to live, to find some acceptance. Ultimately, the communities of people who band together and help each other are the ones who have the richer experience and connection to a world that tried its best to shrug them off. And Mara’s determination to understand the past helps them to forge a future—an uncertain future with no guarantees, but a future nonetheless. This entertaining but fierce story will hopefully serve as a cautionary tale to young readers and encourage them to take seriously the ever-increasing predicament of global climate change.

Click here to purchase Exodus at your local independent bookstore

Click here to purchase Zenith at your local independent bookstore