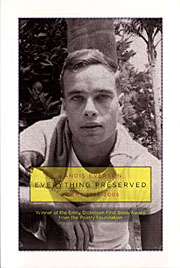 Landis Everson is a visionary poet. But that doesn't mean he leaves earthly desires, pleasures, fears and pains untouched—they are, in fact the basis for his visions. For Everson, the daily world allows the poet to receive insights that, mixing innocence and experience, might be called "divine." The paradox of innocence and experience comes to terms with sensuality, love, and loss in Everson's poems. They are directed, much as Blake's poems were, by a recognition that the small matters of our lives can have a numinous quality.

The visionary quality of Everson's poems is complemented and magnified by an easy formal elegance, a sparing approach to language that leaves room for subtle ornamentation. In "Famine," Everson has a dream-vision of deer entering his dark bedroom:

The moon through the window throws cold light
Upon their curved backs, making a forest
Of crossed antler shadows on sheets
That until now have been flawless and starved.

Everson, allowing us entry to a specific moment by writing in the present tense, crafts a song of innocence tempered by hard-won experience. Deer, representing nature in its most unmediated form, inspire Everson's vision of innocence led away from famine. The famine being effaced seems to be a spiritual state of being or consciousness—it could be bitterness born of experience, the "cold light" of the moon, or a sense of seclusion—and with the end of famine, the rebirth of innocence, complexity creeps in and flaws appear. Human salvation is messy and equivocal, whether salvation takes the form of a vision or a poem; Everson takes account of this messiness, in such a way that it would be hard to miss or ignore. The wisdom of experience cannot be forgotten, even when innocent joy returns.

Everson is a poet with a substantial history. A witness of the Berkeley Renaissance, he was romantically linked with Jack Spicer, and had ties to Robert Duncan and Robin Blaser. The connection to Duncan is especially apparent, as they are both poets of transcendence, ethereality and, paradoxically, domesticity. It is at home that we find the greatest intimacy, and Everson is a poet of intimacies completed; as he writes in "Closet," "I see / the stars right through the back / of your head." Closet, in this context, can mean a space for storing articles or a space for denying one's sexuality. Everson lets the ambiguity linger in the air, but his own affect is visible and brimful—the closet is clearly not for him. In Everything Preserved, Everson has crafted a voice that blends the best parts of innocence and experience. His poems feel like acts of generosity, and the mythology built into them by the poet's history add to their already formidable aura. It is a joy to find a Blakean sensibility still alive and kicking.