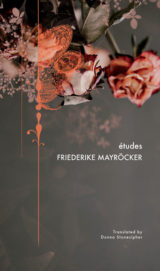 On June 4, 2021, the Austrian poet Friederike Mayröcker died in Vienna. Born in 1924, Mayröcker wrote a multitude of literary works, including prose poems, audio plays, memoirs, novels, children’s books, dramas, and a libretto, many of which garnered major Austrian and German literary awards. In 1946, she met Otto Basil, who published her early work in his avant-garde journal Plan. Later, her poems were published by the literary critic Hans Weigel, and soon after Mayröcker became a member of the Vienna Group, a loose coalition comprising mostly surrealist and expressionist Austrian writers such as the poets Ingeborg Bachman and Ernst Jandl (the latter of whom was her long-time romantic and collaborative partner from 1954 until his death in 2000). Études, a collection of prose poems and part of a three-part series, was originally published in 2013, but is now available in a magnificent English translation by poet Donna Stonecipher.

Long celebrated in the German-language world as a daring and inventive writer of the postwar period, Mayröcker was a passionate participant in the European avant-garde tradition, with all its highly mystical and experimental esotericism. Though not widely translated, her work has long been known in Europe as intense and freely associative, lyrical and wildly expressionistic. With an eclectic taste in reading and a strong rooting in modernist assemblage techniques, her poems have been described as linguistic collages, surrealist montages of language and experience. These collages frequently included fragments of correspondence, newspaper articles, journal entries, observations of the everyday, allusions to European cultural history, and quotations from private conversations.

Mayröcker had a pictorial interest in the visual that is borne out by her frequently quoted statement, “Writing poetry is like painting in watercolors. Writing prose is a hard art, like making a sculpture.” This view of the parallels between her poetry and impressionistic water color sketches can be seen in Mayröcker’s swift, though delicate, brushstrokes of text, which often blur or bleed into each other. Moods, emotions, memories, and regrets all coalesce into a stream of consciousness:

The visual confluence of images such as “purple lilacs,” “shimmering,” and “deep/grotto green,” with verbs of movement such as “fly” and “flee,” and the textured medium of “crepe paper,” all provide a colorful and tactile visual fluidity. This is emphasized by the mention of the French impressionistic composer Fauré, who employed coloristic effects in his music. And indeed, Mayröcker not only draws from the pictorial, but also from musical form and composition, as can be seen in her poem of April 14, 2011:

on 1 voice : on 1 mignonette green this branchlet this blossom this
instant of a teardrop in your eye this raining in your voice swept
forth by spring this scent of white tears this scent of whiteness this
white of spring of voice this little white bell of April (= Fratres)
this whiteness of little bells = Fratres this whisper of voice this
whisper from the vineyard (“April”) these twigs little bells of April
swept away trembling delphinium cress lungwort Bach’s Virgin
chorales &c. disheveled little bird April violin handbooklet April
naked this soul weighted with sleep (= ”Fratres”) ach your voice
+ + + + + + + + + + white from spring white from April spring’s twigs
opened and blossom-amble where the plumed

This rush of romantic images, tremulous with emotion, captures through repetition and accumulative serialism the compositional techniques of Arvo Pärt, the Estonian composer of the 1977 mystical and minimalist string quintet Fratres I. Even more so, there is a tone of jubilance in this poem that speaks to the voice of spring and the “naked . . . soul weighted with sleep,” symbolizing resurrection, the soul’s awakening, and new birth. Mayröcker also alludes to Bach’s ecstatic lyrics in his famous religious motets and chorales, drawn from scripture and Germanic verse, and further to the purity of the Virgin as associated with white blossoms of springtime and tears of joy and reverence. Mayröcker clearly grasps Bach’s mastery of counterpoint and harmonic and motivic organization in this piece as well.

Mayröcker’s dense, allusive poetry, with all its alternatively beatific and disconsolate language, can be seen as a culmination of the European cultural tradition. Her diaristic poems are reminiscent of the ideogrammatic Cantos of Ezra Pound, and though a poetic heir of Gertrude Stein and Francis Ponge, she breaks free into a 21st-century post-modern sensibility, one of polystylism and eclecticism. She also seems to have drawn from her Austrian heritage the continued experimentation of the Second Viennese School, which developed the dodecaphonic system and the use of serialism in music.

Throughout études, Mayröcker shows herself to be the descendent of many European schools of thought, artistic movements, concepts, styles, and praxes: German Romanticism, Rilkean Modernism, German Expressionism, Postwar Surrealism, Postmodernism, Deconstruction, and on and on. Take, for instance, her poem of April 8, 2011:

the aroma of spring little gullet inmost sensation while the heart
cherries days : little forest bird in DADA airs and imploringly with
folded hands (namely 1 PUNK boyphriend in the “Dreschsler”
staring into the OPEN : Andreas O.)

Here, she simultaneously alludes to Dadaism; the Punk movement of the late 1970s with its fast-moving and aggressive music and subculture (as well as possibly the highly academic “Austro-Punkism” debate between young and older Austrian economists in the early 2000s); and Ulrich Dreschsler, an Austrian saxophonist and composer of improvisational jazz who was inspired by Scandinavian folk as well as Sufi music.

In many ways Mayröcker’s études acts as a Rosetta Stone, a “key” to cross-reference and thereby understand her vastly imaginative and often divergent thoughts and emotions. The collage effect of Mayröcker’s textual poems, while fragmentary and elliptical, does convey a highly Romantic tone—one committed to nature, individualism, memory, and self-contemplation.

Technically compact, the poems are in paragraph form and often superseded by short epigraphs. Utilizing Stein’s repetition and Ponge’s fascination with the simple contemplation of objects in everyday life, Mayröcker pulls us into an intimate engagement with her doubts, concerns, obsessions, and memories. Typographical and syntactical play, with frequent capitalization “errors” or misspelling of words and use of underlining, italics, and ellipses, blend together the conventions of 19th-century novels, plays, and Romantic poetry with the clipped, abbreviated slang of modern texting or conversation.

But Mayröcker is not all about obscure references and experimentation. While these poems do, of course, embody an elevated hermetic style and European aestheticism that may prove at odds with poetry of the present day, these works are also richly passionate, elegiac, and mystically personal. Her effusive and mannered textual bricolage can sound obsessive and self-dramatic, but ultimately Mayröcker prevails in her constant search for personal truth, no holds barred.