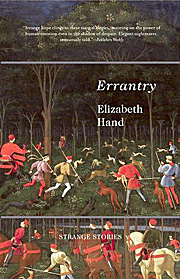 It’s a shame we’re not often genuinely baffled, not often presented with inexplicable scenarios or esoteric information to which we’re ill equipped to respond. But the enigmatic stories in Elizabeth Hand’s new collection,Errantry, all arouse the vertiginous feeling of being confronted with the incomprehensible. Jeffrey, a widower in Hand’s story “Near Zennor,” perhaps describes this plunging sensation best after finding a few revealing letters hidden in the attic by his late wife: “The sight made him feel lightheaded and queasy: as though he’d opened his closet door and found himself at the edge of a precipice.” It’s not just unsettling mystery that sets these stories apart, but also that they’re masterfully interwoven with the hum-drum of reality. The impossible merges with the mundane in a strangely believable fashion.

“Hungerford Bridge” offers a perfect example of this. In the story, Miles reveals one of London’s secrets to his friend Robbie: an emerald-scaled, hedgehog-like creature that roots around the underbrush of an inner-city park. The peculiar animal doesn’t strike Robbie as anything that’s been cataloged by science or, for that matter, noticed by the people bustling in the public space. After the creature retreats to its burrow, he makes his incredulity clear:

By showing Robbie the emerald foliot, Miles also passes along the burden of keeping it secret. You’re only supposed to visit the foliot twice: when it is initially shown to you, and when you show it to the next secret-keeper. Why? Miles doesn’t know that either, it’s just what he heard from the person who showed him. With such circular logic, it begins to make sense how something so alien and implausible could remain hidden in plain sight.

Hand’s mastery of the inexplicable invites her to experiment in many genres and narrative styles, including horror, fable, middlebrow fantasy, and more. In “The Maiden Flight of McCauley’s Bellerophon,” archivists at a flight museum rebuild an impossible contraption and set out on a steampunk adventure. In “Summerteeth,” artists at a retreat ride out the apocalypse while composing avant-garde music and painting landscapes. Nordic demigods, changelings, and conjurors walk among the characters—and probably drink at the same pubs too.

The stories confound yet delight, blurt unanswerable questions yet hold their tongue. Each will leave you scratching your head and asking, “Well, what if . . . ?” Overcoming the constraints of genre, Errantry is strange fiction at its finest.