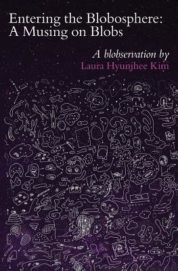 The tradition of constraint in literature hinges on the proposition that a clever idea makes all the difference in the world. The Blobosphere is the defining concept for Laura Hyunjhee Kim’s phenomenal meditation Entering the Blobosphere: A Musing on Blobs. If the Blob still evokes for you images of a forty-year-old Steve McQueen in a varsity jacket romancing a girl in the technicolor 1950s, that’s okay. Kim gets you up to speed quickly:

What makes this writing feel so important and audacious is that it describes a metaphor around epistemology today, and it enacts that metaphor within the text. Usefully, Kim describes the origins of the project: “From mining the word ‘blob’ in online forums to compiling a list of digital artworks that focus on hyper-visceral ‘blob’-like gestural forms of expression, I started categorizing my findings based on the resemblance of what I thought a ‘blob’ is and should be.” And the results are funny, as well as very smart. There is the Blobosphere:

Catalyzed by a collective desire for materialization, a seedling blob rhizomatically blossoms into a complicated blobject of discussion and its deep roots penetrate back into the (non) human life cycle.

It took billions more years for inanimate blobized atoms and molecules to form living micro-blobs on earth and still more millions for pre-biotic-blobs to evolve and self-replicate into beautifully diverse and sophisticated blobs.

And eventually an argument about affect, through this mashup:

Skin has become inadequate in interfacing with reality.
A blob has become the body’s new membrane of existence.
—N.J. Paik

So if you’re concerned with the way historicity flattens disparate epochs into a parade of ostensible diachrony, the blobosphere is here for you; or if you identify multiple projections of self, floating across the internet morass, there are blobby answers for that as well. The blob, as a metaphor, is connected to Deleuze’s writing about “The Fold” and to the floating philosophical “I” that Wittgenstein identified as a kind of limit, the place of exchange for social affect.

And Kim ultimately argues for an ethic within the form. In her introduction, Janice Lee draws an emphasis on the blob as a metaphor for the site of encounter, “we are interested in how bodies and worlds articulate each other, how a human body allows an animal’s world to affect her and in turn, how a human’s world affects an animals body. Or, more generally, how we learn to be affected.”

Part of the brilliance of this formal investigation is that it gets at some of the messiness of concepts that don’t adhere, especially the breakdown and entropy of systems of description. In language, art, and philosophy, there is often a bias towards neatness, but the blobosphere delights in the junk drawer aspect of the human mind. This is exciting work; it captures an elegant and generous snapshot of our unruly and self-making bodies in an unruly and self-making world.