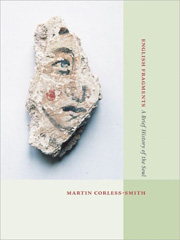 Martin Corless-Smith’s fifth collection of poetry, English Fragments: A Brief History of the Soul, is a deeply companionable book; I was touched by its musicality, its powers of reflection, its candor, its sensuality, its intellectual tastes, but also by its sympathetic and contagious magic: the ability to gather into poetry, despite the reference to “fragments” in its title, the sense of a life, a way of life. Evoking the relation between fragment and panorama, the many elements of this book might be regarded as relics comparable to the elusive (and sometimes counterfeit) sources of the ballad revival of the 18th century. Yet, just as the ballad scandals of the 18th century represented the leading edge of a tumultuous wave of poetic modernization (associated with the promiscuity of vernacular speech), so the self-conscious anachronism of Corless-Smith’s panorama signals the emergence once again of a tension between interiority and the enigma of the surface, between individualism and impersonality—between lyric and ballad.

Although some readers may be inclined to see something vaguely neo-Romantic in Corless-Smith’s work, such speculation would be plausible only if one has in mind the infidel Romanticism associated with Thomas Spence and the radical London Corresponding Society of the early 19th century.

The labourer’s heel must spade
Through roots and ruinous foundations
For his fruit—silent to his own antithesis
Under no old name nor in secure
Bond—no college ties his wit
Nor patron offers order
He may grasp. But to his soil
And simple burial he works
His hours his own—his elements apparent
All efforts are exact—all sober
Air and light until his lapse
To ordinary earth and extraordinary breath

Here is a renegade Romanticism more concerned with making than with speculation, with theworker’s knowledge of the relation between labor, pastoral, and the soul’s breath.

As for poetic models, it might be more helpful to note Corless-Smith’s curious affinities (in diction, sentiment, and naked susceptibility) with certain 18th-century poets (Oliver Goldsmith, William Cowper, Christopher Smart) whose writing was torn between lyric, ballad, and didactic exigencies. Each of these poets experienced periods of insanity or dissolution (anticipating the similar fates of John Clare and Ivor Gurney), conditions arising in part from the exposure of their work to violent cross-currents between literary and vernacular, or secular and spiritual, poetries. The fragmentation of Corless-Smith’s writing may be read as well—in poetic and cultural terms—as an expression of “madness” in the face of similar tensions in our own time.

Not surprisingly, given the promiscuity of his text, Corless-Smith’s apocryphal model of the soul (traces of which can be found in most of his earlier books) never strays far from the concept and experience of reading: “The language of poetry is infinitely open, and as such is a model of the divine soul.” Over the course of the book, Corless-Smith develops what can only be described as an ontological theory of reading, imitating, translating, imposture and, ultimately, writing: a life suspended between epochs, nations, personae. Yet, since the soul is always somehow corporeal (“the soul conceived in God’s alembic flesh”), meteoric, or mediumistic, one must therefore descend into the flesh of reading—that is, the dwelling, or habitation, of the soul.

Even more broadly, the poet’s doctrine of the soul (psyche-logos) is also a theory of matter, of society, of landscape: “and our soul is of foliage and standing ponds—the lofty elms—kissing the sand and the penny-loaf—the colour of amber crabshells—and the pink-eared wheat flower.”

To be sure, as the object of its own doctrine of reading, the book is crazed with texts of all kinds: treatise, confession, annal, song, translation (of Trakl, Ronsard, Petrarch, Horace), aphorism, jingle, burden. If the book is indeed a tractatus, Corless-Smith builds his treatise on the soul (in a manner resembling the erotico-philosophical manifestos of Norman O. Brown) from the broken ranks (and words) of philosophers. Yet for Corless-Smith—unlike many poets lingering at the jinxed crossroads of poetry and philosophy—it is never a matter of poetry trying to legitimate itself by citing philosophy, or taking instruction from philosophy, or even looking over its shoulder at philosophy, but rather finding moments when philosophy reveals its inescapably poetic orientation, its ancient familiarity with poetry

More important, however, than the didactic, or miscreant, lyricism of philosophers, are Corliss-Smith’s poetic kin, the “southron” poets—many quoted in the book—from his native Worcestershire, or neighboring counties: Robert Herrick (his eroticism and his daintiness), the forger Chatterton, Cowper, Robert Southey (experimentalist), Ivor Gurney, David Jones. And lest one forget the music of the place, or how it sounds today, recall that the music of Portishead and P. J. Harvey drag Blake’s Jerusalem—and the spell of the West Country—into the present moment. Corless-Smith's rude (and lovely) songs belong in the same company.

At the core of Corless-Smith’s confession and tractatus of the material soul stands a pair of invented personae, embodying different aspects of the poet-philosopher: “Thomas Swan” and “William Williamson.” In Corless-Smith’s previous book, Swallows, an author’s note claims, “During WW2 the poet William Williamson worked as a radio operator on a remote Hebridean island. A series of poetic fragments and long prose pieces were later found written on the walls of his weaver’s cottage.” Corless-Smith appears to be the sole reader of Williamson’s wall-poems, yet this ambiguity—is it a forgery or not—is immaterial (or without material witness) in light of the tenets of the Selenlehre of the English Fragments.

Corless-Smith’s invented (or real) personae are frequently cited in a manner recalling the epigraphic custom of marking the landscape with inscribed tablets (or composing succinct poems in this style). The numerous citations of “W.W.” or “T.C.” in English Fragments indulge in the ancient practice of apostrophe, addressing the passing stranger in a manner recalling the speech act of a beggar (a genre in the tradition of canting songs). Moreover, since “W.W.” and “T.C.” may be regarded as creatures of the authorial imagination, and since the author refers to himself as a “creature” and a monster (“I am become a monster to myself”), one should recall that Dr. Frankenstein’s “creature”—the Gothic counterpart to Corless-Smith’s lyric species—inscribes curious epigraphs in the woods, taunting the scientist as he pursues his tragic invention. Corless-Smith’s English Fragments is a book that will haunt readers for generations to come.