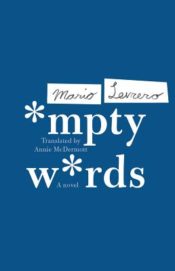 I’m writing this review by hand, something I rarely do. No matter how hard I try, I find it impossible to write legibly, let alone beautifully, and my handwriting has been this bad since at least high school. But if I’m to follow the example set by Mario Levrero, I should try my best not to get distracted from the task of handwriting.

Empty Words is the first novel to be translated into English by the Uruguayan author Levrero (1940-2004). Originally published in 1996, the book follows the attempts of the narrator (a stand-in for the author who, for the purposes of this review, I’ll call Levrero) to improve his handwriting through daily writing exercises. He hopes this “self-therapy” will help him improve in other areas of his scattered life, but when he sits down to his exercises, he can’t help but be distracted. Noise, heat, life responsibilities, family members, pets, and his own mind all conspire against him. He records these distractions, incorporating them into the exercises, although this results in a contradiction: without the distractions, Levrero would supposedly be happier, but the book would be less interesting. He writes: “If I want my handwriting to be good, I can only write about my handwriting, which becomes very monotonous. But writing only about my handwriting keeps my mind on what I’m doing and means I form the letters properly.”

Empty Words contains two threads: the handwriting exercises (complete with distractions) and what Levrero calls “The Discourse,” which has the stated aim of being about nothing. These two threads are interspersed throughout and every entry is dated. In the “Discourse,” Levrero believes writing about nothing will eventually reveal something authentic. “There’s a flow, a rhythm, a seemingly empty form; the discourse could end up addressing any topic or idea.” As with the writing exercises, the rules here are strictly limiting. Seen another way, they are freeing. By throwing off the burden of an idea, Levrero can follow his “Discourse” wherever it takes him. He quickly turns to his dog, Pongo, as subject matter. “It’s false content,” Levrero writes, “or perhaps semi-false, since, like all things, it could easily be seen as symbolic of other, deeper things.”

Levrero writes about gradually pushing open a gap in the fence so that Pongo could escape. When the dog returns from its disappearance with a bad eye injury, the author is overwhelmed with guilt. But what did he expect? Throughout the book, Levrero demonstrates a habit of falling into his own traps. It might be that Levrero focuses so much of the “Discourse” on the needy and neglected Pongo because he sees so much of himself in the dog. If he notices this parallel, he doesn’t say. The author admits to being afraid that the reader “who isn’t me would have already have found something of the true content of the discourse in these lines. . . . How humiliating to give myself away to the reader before I’ve given anything away to myself, blissfully unaware that anything’s been given away at all!”

When Levrero turns his attention to an impending move, his anxiety ratchets up, and when he moves into the new house and notices a nearby electric substation that won’t stop buzzing, he feels even worse. In response to this and other frustrations—including the demands of his nagging child Ignacio and his partner Alicia, who he thinks doesn’t understand his decision-making process—he retreats into his exercises: “Concentration. Relaxation. Focus on forming the letters and focus on your muscles.”

Given how unhappy he is with his surroundings, why doesn’t Levrero pack up and leave? Is he afraid of returning, like Pongo, with some injury inflicted by the outside world? “When you reach a certain age, you’re no longer the protagonist of your own actions: all you have left are the consequences of things you’ve already done,” he writes. “I can’t get free of the tangle of consequences, and there’s no point trying to be the protagonist of my own actions again, but what I can do is find my lost self among these new patterns and learn to live again, only differently.”

What I’ve written down is barely legible, especially the letters g and r. I wasn’t able to concentrate on forming the words because I was too distracted by the difference between Mario Levrero and the character Mario Levrero created of himself. On the bright side, there were no interruptions.