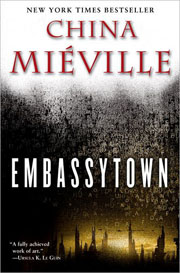 In the early 17th century, the Tokugawa shogunate that ruled Japan imposed the policy of sakoku, prohibiting all trade with westerners except through the artificial island of Dejima, in Nagasaki harbor. The shogun wanted commerce to be easier to control, to prevent rival clans from using foreign technologies to unseat him. He understood the power that stemmed from mastery over the means of communication.

In the powerful ninth novel by British fantasist China Miéville, we hear the story of the titular Embassytown, a trade city much like Dejima. Embassytown, however, is a human trading post on a planet belonging to an alien race called “The Hosts.” Where the Portuguese in Japan had their movement restricted by imperial edict, the humans of Embassytown are limited to a several-mile bubble of breathable air, kept in place by advanced alien technology. We are, in other words, in the realm of science fiction, albeit a particularly thought-provoking and elegant variety that suggests allegories without being bogged down in them.

Miéville’s story follows Avice, a native of Embassytown and a pilot for the trade ships that travel between the trade city and the other planets of a sprawling stellar empire. Embassytown is a backwater, its only valuable export the mysterious pieces of biotechnology grown by the Hosts. Avice is a direct, headstrong narrator, who takes most of the strangeness of her world as given. This makes for a somewhat rough learning curve for the reader, but pays off beautifully in the later phases of the novel, when Miéville begins to deconstruct this world he has so thoroughly depicted.

Avice views the Hosts with a justified mixture of awe and fear. They are, in the best sense of the word, true aliens. Nothing about them is remotely identifiable with humanity, from their vaguely arachnid physiology to their bizarre double mouths that speak simultaneously. The Hosts' minds are even stranger. Avice tells us, “I would never assume I understood the motivations of any [nonhuman], and I had grown up knowing the thinking of the Hosts was beyond me.”

The Hosts' language is fundamental to their alien-ness: it works nearly-telepathically, precluding the possibility of lying. Avice's linguist husband explains that “for them each word is a funnel. Where to us each word means something, to the Hosts, each is an opening. A door, through which the thought of that referent, the thought itself that reached for that word, can be seen.”

In order to negotiate trade agreements, the humans of Embassytown have genetically engineered sets of perfectly identical twins, called “Ambassadors,” who speak and think in near-enough to unison to communicate with the Hosts. The Hosts can't speak to non-Ambassador humans, and barely recognize them as sentient. Avice thinks the Hosts “sometimes watched us as if we were interesting, curious dust”. The Ambassadors, meanwhile, can discuss elaborate treaties with the Hosts, though even they are still tripped up by the Hosts' complex social dynamics.

The two-in-one Ambassadors, like Avice's erstwhile lover(s) CalVin, control all communication with the Hosts and, hence, control the colony. The distant imperial hegemony envies this direct control, and begins to create its own Ambassadors through bizarre psychic experimentation. As these new, mismatched Ambassadors arrive, their interactions with the Hosts quickly become perilous.

Avice is pulled into both these intrigues and the complexities of Host language when she is selected to become a “simile.” A group of Hosts is working to expand their linguistic possibilities by using humans to act out events, creating linguistic objects that can simultaneously be truth and comparison. They need the similes to express hypotheticals, to introduce the possibility of change into their society. “Without Language for things that didn’t exist, they could hardly think them; they were vaguer by far than dreams.” Avice isn't terribly impressed with her new linguistic status, saying, “in the main my simile was used to describe a kind of making do” (actually very appropriate given her ruthless pragmatism).

The Hosts also invite Avice to watch them perform in one of Miéville's most inspired creations, “The Festival of Lies.” This Festival is half cultural exchange, half drug orgy. The human Ambassadors tell lies in their approximation of the Hosts' language, beginning with the simple: “that red chair is blue.” The cognitive dissonance from hearing untruths titillates and intoxicates the Hosts, and inspires the rebel faction to try to tell lies of their own. For them it is “an extreme sport”, one that offers possibilities for vast mental expansion. As the lies grow more elaborate, it becomes clear that the Hosts are trying to learn to tell stories.

The Festival of Lies is the kind of bizarre event you might expect from a fantasy novel, but it has an appealing directness and loads of allegorical potential to unpack. The psychedelic fantasias of Miéville's early novels, such as Perdido Street Station, were sometimes overwhelming, and too often acted as baroque shells for the kind of standard, adventure-driven plots still prevalent in genre fiction. Embassytown is truly a novel of ideas, in which the final battle is waged not between warring space frigates but between competing theories about language and learning. The fate of both the humans and the Hosts depends on their ability to communicate, to find a common denominator of expression and connect across their chasm of understanding, a distance at least equal to that between stars. Linguistics has rarely been this dramatic.

Miéville performs impressive feats here, adroitly exploring a nexus of language, storytelling, and political change. Just as when the Portuguese carracks made anchor at Dejima, we see with brutal specificity how opening channels of communication can enrich some, liberate others, and kill millions. And in showing us all this, Miéville suggests the value of novels such as this one: that a finely crafted lie can be more valuable than truth, and that one might even save the world.