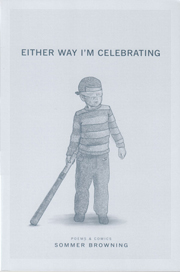 Like Philip Whalen, whose poems all flow along on the same pitch, Sommer Browning displays a lightness of touch amidst multiple forms and approaches in her debut full-length book, Either Way I’m Celebrating. The heights are in the ephemeral, the world as it passes by moment to moment. For example, in “An Officer and a Gentleman,” Browning uses charades to create a meandering, funny, hypnotic, mind-bending poem. In another poem, “When Christopher died I didn’t believe it,” the suffering surrounding death is made even more poignant by the use of seemingly off-handed details:

the government told us we all had to get digital convertors for our
televisions, and then Dimitri died, and I was in my sister’s wedding,
then Jeff died, and I, I don’t know, then

Although the poem is full of people who died—perhaps Browning’s shout-out to another of her precursors, Ted Berrigan—it doesn’t lapse into sentimentality or banality, but rather shows how death happens in the middle of our daily lives.

Browning’s light touch comes through in her use of vernacular and her emphasis on surface, in the tradition of the New York School poets and artists. But it is more than a style, it is a whole approach, and it is everywhere in Either Way I’m Celebrating. Even the title suggests this. No matter what sorrows, pain, suffering may bring, Browning choses the direction of celebrating life in all its strangeness and suffering.

Surprise is also everywhere in Browning’s work, at almost every line break, in the images and juxtapositions, and in the multiple approaches to form. The serial poem “Vale Tudo” hits on this idea of multiple approaches to life/art/poetry. Vale Tudo is Portuguese for “anything goes,” and refers to an approach to fighting using any style of martial arts, an impure, non-style style. In much the same way, Browning’s approaches are impure and varied throughout the collection. “Vale Tudo” takes place in a hotel in Long Island. There is a strangeness in the ordinary here: toothpaste, pay-per-view, plants, continental breakfast, making love, documentaries, ultimate fighting, and shopping malls all feel eerie. The forms are various, from list poems to chatty conversational tidbits to minimalist masterpieces. There both is and isn’t a single “I” in the poem:

I am Alanis Morissette reading her diary. I am the inevitable
rupture in the Cuisenaire rods. I am a biography of doll
makers. I am quoting Cat Stevens. I am double breasting a
suit. I am renowned and sitting in the rain; my mother forgot
to pick me up. I am putting my hands on measurement and it
feels cold. But I’m cold.

Surprise and lightness are also abundant in Browning’s poetry comics. In the tradition of Kenneth Koch’sThe Art of the Possible: Comics Mainly Without Pictures, Glen Baxter’s quirky Trundling Grunts, and Joe Brainard’s infamous Nancy Book, Browning’s poetry comics delight again and again. Some of these poetry comics are political and quite a few are sexual— and sometimes they’re both. For example, in the fantastic “Barbie vs. Ken,” the two doll icons are reduced to the symbols and shapes of their genders. Or take these two untitled comics on opposite sides of the same page: one shows a pair of breasts descending to pick up a telephone receiver with its nipples; the other shows a male scrotum (complete with balls, penis, and pubic hair) descending to rest on a traffic cone. Both the traffic cone and telephone are technologies of communication, here sexualized with human body parts.

In another register, there’s a poetry comic with six panels of a foot kicking an object (from everyday objects like a table to famous structures like the Eiffel Tower or even abstractions such as Kant’s categorical imperative) while apologizing (e.g., “Sorry, Eiffel Tower”). Like all good humor, this has multiple layers. It seems a playful response to the old tale of Samuel Johnson kicking a stone in response to Bishop Berkeley’s idealism (the non-existence of matter/objects). Nothing is sacred here. Browning’s objects are re-contextualized, re-framed and re-energized in her poetry comics, and they re-matter.

Either Way I'm Celebrating is quirky, but it is not forced. There is a deep-seated intelligence here: awake, open, honest. Browning’s generosity of tone makes the collection, in Frank O’ Hara’s phrase, as exciting as the movies. Without grandiosity, but with deep wisdom, this collection brings us closer to 21st-century life, in the raw, and in the real.